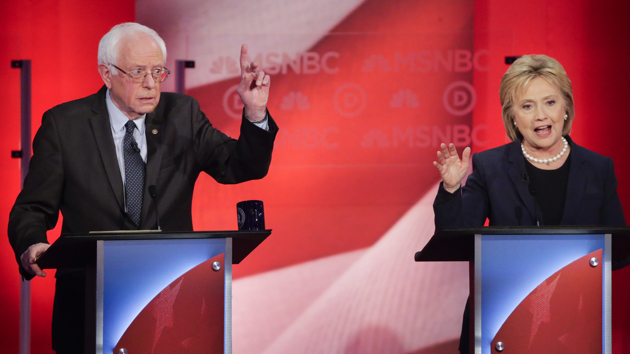 Explosive would be an understatement. Sen. Bernie Sanders and former Secretary of State Hillary Clinton didn’t waste any time in Thursday’s Democratic presidential debate in New Hampshire before jumping into a heated exchange over whether Clinton is a true progressive—a subject that continued to emerge in various forms for most of an hour.

The stakes going into this debate were high, particularly for Clinton, with polls showing her far behind Sanders in New Hampshire just four days before the first-in-the-nation primary. Clinton eked out a very narrow win in the Iowa caucuses on Monday but underperformed her polling there, setting up what could be a long slog for the Democratic nomination.

The debate itself was the product of a dramatic back-and-forth between the two campaigns and the national Democratic Party over the number of debates scheduled. The tensions that went into scheduling it were evident in the fiery debate.

Here are the must-watch highlights:

After Clinton’s challenge, the debate moderators wondered: Does Sanders dispute the idea that Barack Obama should be termed a progressive? “Do I think President Obama’s a progressive? Yeah, I do,” Sanders said after a long windup, though still noting that he disagreed with the president on a number of issues.

Clinton fights the “establishment” label. MSNBC’s Rachel Maddow quizzed Sanders about Clinton’s big advantage in endorsements from fellow Democratic politicians from Vermont. “Secretary Clinton does represent the establishment,” Sanders responded. “I represent, I hope, ordinary Americans, and by the way, who are not all that enamored with the establishment.”

Clinton was ready to dismiss that dig, however, noting that her candidacy is far from the norm. “Honestly, Sen. Sanders is the only person who I think would characterize me, a woman running to be the first woman president, as exemplifying the establishment. And I’ve got to tell you that it is really quite amusing to me.”

Sanders explains his problem with Clinton’s campaign funds from Wall Street. Sanders emphasized that Clinton and the super-PAC supporting her candidacy are taking donations from the financial sector—and argued that it is this kind of political donation that helps big industries like Wall Street avoid tough regulations.

“What being part of the establishment is, is, in the last quarter, having a super-PAC that raised $15 million from Wall Street, that throughout one’s life raised a whole lot of money from the drug companies and other special interests,” Sanders said. “To my mind, if we do not get a handle on money in politics and the degree to which big money controls the political process in this country, nobody is going to bring about the changes that is needed in this country for the middle class and working families.”

Clinton goes after Sanders’ “artful smears.” Sanders’ favorite refrain on the campaign trail has been that he wants to talk about issues rather than the nasty personal attacks that normally define political campaigns. Those claims of purity aren’t ringing true to Clinton, who termed his attacks against her “an artful smear” that cut against his earlier pledges. “But time and time again,” Clinton said, “by innuendo, by insinuation, there is this attack that he is putting forth, which really comes down to—you know, anybody who ever took donations or speaking fees from any interest group has to be bought. And I just absolutely reject that, Senator. And I really don’t think these kinds of attacks by insinuation are worthy of you. And enough is enough. If you’ve got something to say, say it directly.”

Emails are…still not an issue in the Democratic primary. (Sorry, moderators.) Moderator Chuck Todd asked Clinton whether she can assure Democrats that the controversy over her emails will not “blow up her candidacy” if she wins the nomination. Clinton’s response was unequivocal.

“Absolutely I can,” she said. “You know, before it was emails, it was Benghazi, and the Republicans were stirring up so much controversy about that. And I testified for 11 hours, answered their questions. They basically said yeah, didn’t get her. We tried. That was all a political ploy.”

Todd tried again. “Are you 100 percent confident that nothing is going to come of this FBI investigation?” he asked.

“I am 100 percent confident,” Clinton responded.

Clinton defends the death penalty. The moderators challenged Clinton on one area where she’s not quite in step with the Democratic primary electorate: capital punishment. When asked about whether she still supports the use of the death penalty, Clinton said she’s skeptical of how it’s employed at the state level but thinks it’s an important tool at the federal level, highlighting Oklahoma City bomber Timothy McVeigh as an example where capital punishment was warranted. “I do, for very limited, particularly heinous crimes, believe it is an appropriate punishment, but I deeply disagree with the way that too many states are still implementing it,” Clinton said. “If it were possible to separate the federal from the state system by the Supreme Court, that would, I think, be an appropriate outcome.”

Sanders, in turn, said he opposed the death penalty in all cases. “Number one,” Sanders explained, “too many innocent people, including minorities, African Americans, have been executed when they were not guilty.” But even beyond the racial implications, Sanders said he objected to capital punishment entirely. “In a world of so much violence and killing, I just don’t believe that government itself should be part of the killing.”