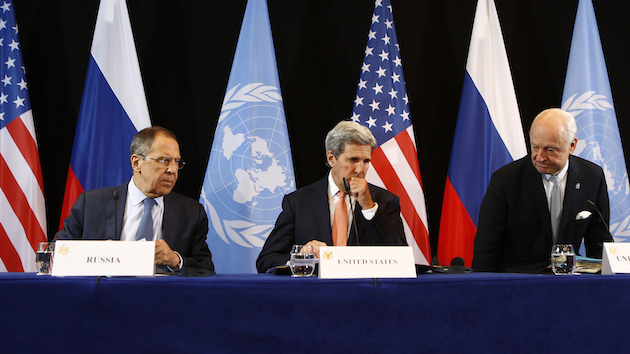 Less than two weeks after peace talks over the Syrian civil war abruptly ended, the International Syria Support Group—a body of about 20 countries and international organizations involved in the war, including the European Union and the United Nations—announced on Thursday that they had finally brokered the terms of a halt to the brutal war that has killed nearly half a million people. The “cessation of hostilities” between regime forces and rebel groups, if successful, would be the first general stop to the fighting in almost four years. It seemed to meet some of the Syrian opposition’s demands for humanitarian relief and a halt to Russian airstrikes against civilians and rebels. But none of this means the agreement is likely to succeed.

The International Syria Support Group group pledged its members would push “all parties [to] allow immediate and sustained humanitarian access to reach all people in need” and “take immediate steps to secure the full support of all parties to the conflict for a cessation of hostilities.” Those parties, however—the Syrian government and mainstream rebel groups—weren’t actually part of the negotiations. Thursday’s agreement merely sets the terms for how a cessation of hostilities would look, leaving the United States, Russia, Iran, and others to convince their allies on the ground to abide by the pact.

How exactly they’ll convince the regime and the opposition to play along hasn’t yet been decided; the declaration gives the ISSG a week to figure out the details of the agreement and implement them. “We will only be able to see whether this was a breakthrough in a few days,” admitted German Foreign Minister Frank-Walter Steinmeier during the announcement, which took place at a security conference in Munich. Secretary of State John Kerry also tempered expectations for the cessation agreement. “The real test is clearly whether or not all the parties honor those commitments and implement them in reality,” he said. “What I’ve said again and again is we cannot guarantee success in the outcome.”

The fact that the opposition’s High Negotiations Council, a body made up of dissident Syrian politicians and rebel leaders, is not taking part in the discussions in Munich means the agreement may not get crucial buy-in from armed groups on the battlefield. Such support is critical for political negotiations or agreements to hold.

The Washington Post reported that while rebels may accept the “ceasefire”—the United States and Russia are divided on whether to use the term—out of exhaustion and lack of options, they are still highly skeptical. “We no longer trust words. There have been too many recently, matched with opposite action on the ground from the Russians,” Issam Rayess, a spokesman for the rebels’ Southern Front coalition that fights near Damascus, told the Post‘s Liz Sly. “Within a week everything will have been destroyed,” one civilian told her. And no matter what the rebels decide, the agreement will also have no effect on jihadi groups like ISIS or Jabhat al-Nusra, Syria’s homegrown affiliate of Al Qaeda.

The High Negotiations Council has adopted a wait-and-see approach. When the Geneva talks stopped earlier this month, the HNC said it would not return to the table until Russian airstrikes ended and humanitarian aid began flowing to starving and decimated areas of Syria. The United Nation’s Syria envoy hopes to restart the talks by February 25, and HNC spokesman Salim al-Muslat says the cessation of hostilities must actually take effect before the opposition returns to talks. “If we see action and implementation, we will see you very soon in Geneva,” he told reporters on Thursday.

But even if the fighting does stop for any significant length of time, the two sides are still no closer to agreeing on the most basic issue of the war: what to do with Syrian President Bashar al-Assad. The opposition and its backers will not accept any political solution that allows Assad to stay in office. But on the same day the cessation was announced, Assad told the French wire service AFP that he has no plans to give up any territory or power, instead reconfirming his intent to regain control of the entire country. “This is a goal we are seeking to achieve without any hesitation,” he said in an interview on Thursday. “It makes no sense for us to say that we will give up any part [of Syria].” As Middle East analyst Brooklyn Middleton noted on Twitter, Assad’s statement means the cessation of hostilities will mostly be an illusion of progress rather than an actual achievement.

It is as though what Assad vows to do – and then does – is completely and utterly disregarded by those attempting to facilitate a ceasefire.