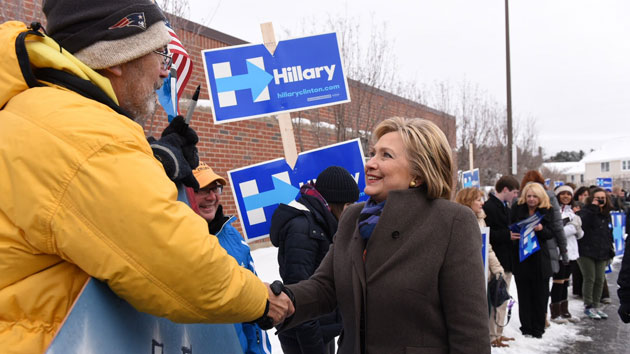 New Hampshire is different—so says New Hampshire. But it’s unarguably true; no state combines as high a saturation of candidate visits with such a small, tightly concentrated population. (Just try having some breakfast poutine in Manchester.) The effect is that the candidates sometimes seem as if they spend as much time talking about the voters they meet as they do talking to them. As the Republican and Democratic contenders made their final pitch over the last eight days, they used New Hampshirites they’ve met to make substantive points about heroin addiction, drug prices, and college tuition—or just to have some fun with their audience. (We see you, Chris Christie.) Here’s a sampling:

One lady was sitting way up in the bleachers, at the end of the town hall…And she’s sitting way up in the stands and she raises her hand and she says, ‘I have a 31-year-old daughter, she developed cancer as a young kid, and we don’t know where we can put her. She’s on prescription drugs because of the pain and so we have to watch that and we don’t know exactly where she should be.’ And I looked at her and said, ‘You’re all alone aren’t you?’ And she said, ‘Yeah, I am, I’m all alone.’ And I said, ‘Why don’t you come down here?’ And she came down to where I was. I gave her a big hug, and I said, ‘You know you’re not alone anymore.’ And we followed up…

In short encounters with people, they sometimes tell you the most personal things…When I was canvassing in Manchester, a young man came up to me and he said, ‘I’m supporting you.’ I said, ‘Thank you.’ I said, ‘I want to know why.’ He said, ‘Because you’ve been talking about addiction.’ I said, ‘Did you have a personal experience?’ He said, ‘Yeah, I’m a student athlete, I got injured my senior year in high school. I had to have surgery and I got a lot of pain pills. A lot of opioids. And I got hooked.’ He said then when they cut him off, ‘I turned to heroin. It was cheap and readily available.’ He said, ‘I’m two and a half years sober. It’s really hard. Every single day, it’s really hard.’ He said, ‘I want a president who thinks about people like me.’

It’s funny, when you’re a US attorney or a governor and you travel out of state from New Jersey, it’s amazing the things people wanna ask you. So I had a guy in New Hampshire, he said, ‘I need to ask you a question about something.’ I said, ‘Okay, what do you want to ask me?’ He said, ‘I wanna ask you about Tony Soprano.’ So I said, ‘Oh my God…’

A couple nights ago, there’s a young woman sitting in the back, we were talking about the issue of heroin and prescription drugs and all the things that we’ve done, ’cause there’s been so many things that we’ve done. She finally raised her hand back there and she said, ‘My daughter’s been sober for 11 months,’ and everybody was stunned, and there were people out there that were tearing up. And I said to the crowd, I said, ‘Do you have any idea what this lady’s life is like? Eleven months sober? Well, we don’t know what’s gonna happen in the 12th month, or the 13th month. And it’s a mom that loves her daughter.’ Yeah I guess I’m now gonna call this daughter and say, ‘You know, mom’s counting on you.’ Things like that have been happening all the time and I have become convinced that all of us need to slow down.

I met a guy this morning who was talking to me about his dad, who’s a truck driver. He was at a town hall this morning to ask me a question about his dad. His dad had to be out driving today. One of the things that we talked about was—I know how to drive, right? I know how to work the clutch and shift, I know how to use the steering wheel and pump gas. You don’t want me driving an 18-wheeler truck. Believe me, you do not want me driving that truck. Right? It’s a different skill set. You’ve got to have some experience and training. Especially on a day like today. It’s raining out, the weather’s wet, the roads are tough. You don’t want somebody who doesn’t know what they’re doing behind the wheel of that truck. Even though I know how to drive, it doesn’t mean I know how to drive an 18-wheel truck.

At a town hall meeting today, someone came—told a story of their father who looked like he was 85. He had, he got a bill eight years later from an operation he had. Eight years it took. They couldn’t resolve the dispute and then he was told that he died. Literally, the Veterans Administration sent a death certificate to this guy and it took nine months to clarify the guy [was alive]. I met him. He’s voting for me. And he is—likely to be alive.

I was just up in Manchester, I met with the police officers yesterday. Tremendous people. They love the area, they love the people, they love all the people. They want to do their job. And you’re going to have abuse and you’re going to have problems, and you’ve got to solve the problems and you have to weed out the problems. But the police in this country are absolutely amazing people.

Let there be no doubt that I want your vote…Earlier in New Hampshire, back last August, I gave a town hall meeting and a gentleman came up to me afterward, he said, ‘Governor, I love everything you said, I agree with all your positions, I think you’d be a great leader for our country, and I’m not voting for you.’ I said, ‘You’re not voting for me, what do you mean you’re not voting for me?’ He said, ‘Well I agree with on your positions. I’m not voting for you but I wish you the best of luck.’ He looked like he was in his mid ’80s, and he started walking away from me. I said, ‘Wait, wait, wait, come back here.’ I said, ‘Come on, tell me what I’ve got to do. That’s fair.’ He said, ‘Alright—because you didn’t ask for my vote.’ He said, ‘I sat here for two hours, I listened to all your positions, I loved them, I like you, but if you don’t ask for my vote, you’re not getting my vote. So you’re not getting my vote, I’m sorry.’

I looked at him and said, ‘Well can I have your vote?’ He said, ‘Too late.’ I said, ‘Too late?? It’s August, man. You’re not voting until February. How can it be too late!’ He said, ‘Alright, this is what I’m gonna do: I’m gonna come back to one of your town hall meetings later.’ He said, ‘I’m gonna sit in a place where you can’t see me. And I’m gonna see if you remember what I told you. And if you do and you ask for my vote, then I’m gonna reconsider my position. And if you don’t, I won’t.’ I said, ‘Alright sir, thank you, I appreciate it.’ And we shook hands. And he walked away, took about four or five steps away, and then he stopped and turned back and looked over his shoulder and he said, ‘By the way, that’s how we do things in New Hampshire, son.’

So I live in mortal fear of this guy.