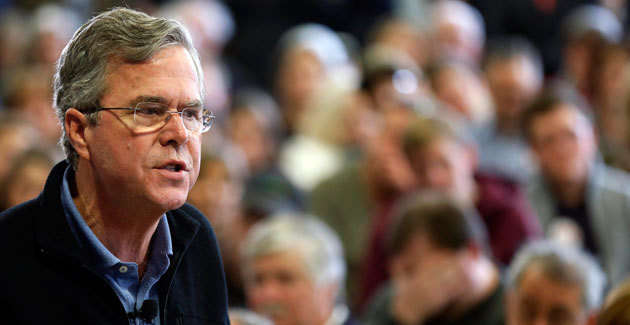 “A steady hand.” Jeb Bush has used that phrase repeatedly throughout the campaign, as he attempts to convince voters that he’s the tried and tested choice for president—the anti-Donald Trump. Bush made that case again today, ahead of Saturday’s Republican debate, at a crowded town hall meeting in Bedford, New Hampshire. Dressed casually in a black fleece and seeming at ease as he heads toward a primary that could either finish off his sputtering campaign or give it the momentum to fight on, Bush waxed wonkishly on everything from corporate inversions to student debt to mental health policy. But he also sharpened his attacks on Trump and Ted Cruz, the GOP front-runners who, he argues, can’t be trusted to steer the ship of state.

“I’m not a psychiatrist or a psychologist, but the guy needs therapy,” Bush said of Trump. And he derided Cruz for talking “about carpet bombing as though that is a policy.”

“For Ted Cruz’s edification,” Bush sniped, “we actually have very sophisticated weapons now. We don’t have to to carpet bomb. We don’t have to kill innocent people.” Then Bush turned back to Trump—whom he claims his rivals have been too timid to attack.

Or saying that you’re going to bomb the S-H-blank-blank out of ISIS. Really? Is that a serious thought? The next commander in chief has to have the backs of the young men and women we send overseas to keep the nation safe. And that kind of talk only endangers their lives. When a candidate says they’re going to ban all Muslims, how hard will it be to build a coalition of Muslim nations to be able to destroy ISIS? We’re living in dangerous times. We’re not running for the back bench of the United States Senate. We’re running for the presidency of the United States.

So far, Bush’s “adult in the room” argument (a version of which, Marco Rubio is also trying to make) has failed to resonate as his campaign of inevitability has been overshadowed by Trump’s wild pronouncements and Cruz’s sharp rhetoric. Headed into Tuesday’s primary, most polls show Bush coming in fifth place, behind Ohio Gov. John Kasich (whose name recognition in New Hampshire is such that his campaign has circulated a mailer titled, “Who is John Kasich?”).

At Saturday’s debate, Bush will have another opportunity to convince Republican voters they need a “steady” leader. But at least one Bush supporter at the town hall was urging Bush to take off the gloves on the debate stage. He invoked the famous 1980 heavyweight title bout between boxers John Tate and Mike Weaver. Going into the 15th round, the undefeated Tate, who was defending the heavyweight title, seemed sure to win. Then Weaver unleashed a left hook that knocked Tate unconscious. “Metaphorically, you’re Mike Weaver, and Donald Trump is John Tate,” this voter told Bush. “Governor, you’re Mike Weaver—throw that punch tonight.”