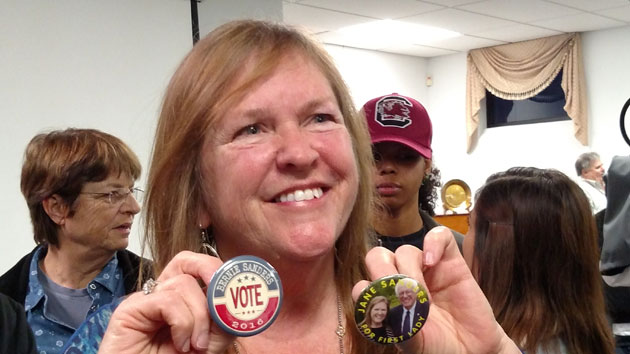 Bernie Sanders is keeping a light schedule in South Carolina ahead of the state’s Saturday primary. Save for a CNN town hall on Tuesday, the Vermont senator has held no major public events in the state since Sunday and has no plans to be back until Friday. But in the meantime, his campaign is doing the same thing Hillary Clinton’s campaign does when it wants to be two places at once—calling in an ex-president.

In Sanders’ case, that would be the ex-president of Burlington College, Jane Sanders.* The senator’s wife of three decades has so far only seen limited use as a campaign trail surrogate, but on Tuesday in Columbia she was at a community center heading up a motley crew of surrogates who included a handful of local leaders; a fourth-grade class president from Florence, South Carolina; Lethal Weapon star Danny Glover; and Gus Newport, the former socialist mayor of Berkeley, California.

Is it me or does this make you think of Newport cigarette ads? https://t.co/KRIVZ6D1G2 pic.twitter.com/W7DtnsevhK

The theme was education, a sweet spot for the former college administrator, who has co-written legislation for Sanders in Washington and ran an after-school program when he was mayor of Burlington. (Just don’t call her a “secret weapon.”) While Jane Sanders seemed, at first, a little nervous speaking extemporaneously, she settled into a groove when it came time for audience questions.

“People say, ‘Oh, Bernie doesn’t have foreign policy experience’—foreign policy is more than war and peace,” she said. “We’ve been to maybe four dozen or more countries and always, always, always he finds time to meet with educators and doctors and nurses, and to talk about what they’re doing that is cutting-edge.”

As evidence, Jane Sanders cited her experiences in Sweden—which Sen. Sanders has pointed to as a model of democratic socialism—where educators work closely with the industrial sector to ensure students aren’t being groomed for jobs that won’t exist. And she offered an example of Swiss ingenuity that might fit well in the United States: “[Their] high school model is completely different than ours,” she said. “Anybody who knows high schoolers knows they want to do something, they want to have a meaningful impact to contribute. And in the agrarian way of teaching they have to go to class and listen or in the best cases be creative. But in Switzerland they have an apprenticeship program that starts in 10th grade, and they go to actual jobs and they learn on the job but they also come back to the high school one or two days a week to learn the theory and the education.”

Newport was an unusual choice to be a campaign spokesman for Bernie Sanders. A former black nationalist, he and Sanders became friends while they were both serving as mayors in the 1980s. Newport even came to Vermont to campaign for Sanders’ failed 1986 gubernatorial run. Like Sanders, who honeymooned with Jane in the Soviet Union and later traveled to Nicaragua to meet Sandinista leader Daniel Ortega, Newport conducted his own foreign policy as mayor, making several trips to Cuba and establishing diplomatic relations with the Soviet Union. Sanders doesn’t talk much about his time as mayor of Burlington on the stump, but Newport seized on his friend’s work on affordable housing in the city. “If people ask if he’s qualified, that brother’s so qualified,” he said. “I got a knee replacement, I’m 80 years old, I’ll be 81 in two months. I’ll carry his bags.”

(Newport’s other contribution to the community center event was to tell an extended joke involving a priest, a hippie, and Henry Kissinger; I’ll spare you a complete retelling, but suffice it to say that Kissinger dies.)

Although Jane Sanders was the only Caucasian member of the panel, the audience itself looked like the heavily white electorates that Bernie did well with in Iowa and New Hampshire. Even though the event was held in a predominantly African American neighborhood, the attendees were about 90 percent white, including a large number of students from the nearby University of South Carolina and a contingent of nurses from out of state who are road-tripping on Bernie Sanders’ behalf.

When it was over, Jane Sanders pressed the flesh like a political pro, warmly greeting the die-hard supporters who showed up. A woman named Summer Rose, who had driven her LED-light encrusted Bernie-mobile from California, handed Sanders a brightly colored bank note. Rose had heard somewhere that Jane was a Grateful Dead fan, and so she and a bunch of Deadheads from the Bay Area had pooled their money to make a donation. Except, apparently, the only currency they had was a Swiss 20 franc bill.

Jane Sanders posed with a baby. She told another voter she’s a Mets fan. Someone asked her about school lunches and she said she supported putting fresh, local ingredients on kids’ plates. Not Monsanto? “Oh, Lord!” she said throwing up her hands. Not Monsanto. Another man handed her a pair of buttons that the local group HeartBern (which promotes the Sanders campaign by throwing raves) made for her, depicting the future first couple. She held them up for the camera. And then she was whisked away to do an interview on CNN.

Correction: An earlier version of this article misstated the name of the college of which Jane Sanders was president.