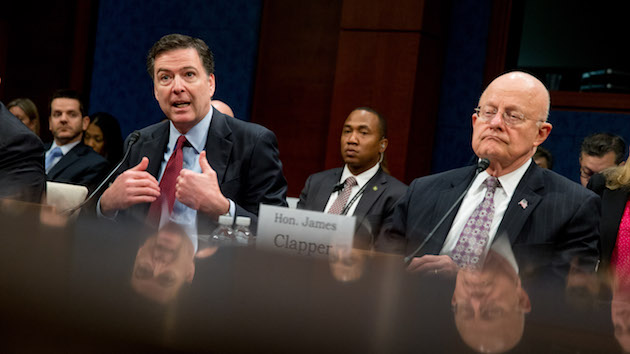 If Apple is forced to help unlock the iPhone used by San Bernardino shooter Syed Farook, what else can the government make private companies do? Don’t ask FBI Director James Comey.

Members of the House Intelligence Committee repeatedly asked Comey that question during a committee hearing on Thursday. It was Comey’s first public appearance before Congress since a Los Angeles court ordered Apple last week to help the FBI by writing new code that would bypass security features on Farook’s phone. Apple refused, and the battle between the company and the FBI is now major national news.

The fight centers on whether Apple, by complying with the court order to write new code for the FBI’s use, would set a precedent allowing the government to request essentially anything from tech companies to aid investigations, whether it was cracking encryption or sneaking surveillance tools into software updates. But when faced with several questions on the topic, Comey pleaded ignorance.

“I think the answer would best come from a technical expert and a good lawyer. I’m neither of those,” he said in response to a question from Rep. Adam Schiff (D-Calif.), the ranking Democrat on the House Intelligence Committee, about the potential limits on the government’s powers to demand help from tech companies. Comey is in fact a good lawyer—he received a law degree from the University of Chicago in 1985 and served as deputy attorney general, the second-in-command at the Department of Justice, during the Bush administration.

Another committee member, Rep. Jim Himes (D-Conn.), later tried again. “Where does this authority end?” he asked Comey. “Can you paint a very bright line for us with respect to where you think that authority ends?”

“I don’t think I can,” Comey replied. “I’m really not qualified as someone to give you a good answer to that one.” When Himes attempted to clarify, asking if the FBI thought its ability to request help stopped with just Farook’s iPhone—a position Comey has taken over the past week—Comey again ducked. “I actually have not thought of it,” he told Himes. “The FBI focuses on case and then case and then case.”

Comey did acknowledge that the Apple case “would be instructive for other courts,” but he argued that the order would be limited because it applied only to an iPhone 5c—the model Farook used—running a specific version of Apple’s iOS operating system. Many tech experts disagree with that argument, saying the FBI’s request for new code could be demanded for almost any device.

While Comey did not directly address the notion of precedent, some of the FBI’s supporters in law enforcement have said publicly that the Apple case could give them the ability to demand that companies provide them access to the phones of criminal suspects for any number of crimes. Apple is currently fighting at least 12 other similar orders for help gaining access to phones held by law enforcement, and Manhattan district attorney Cyrus Vance, a leading advocate for giving government access to encrypted devices, says his office has 175 phones that law enforcement officials want to access.