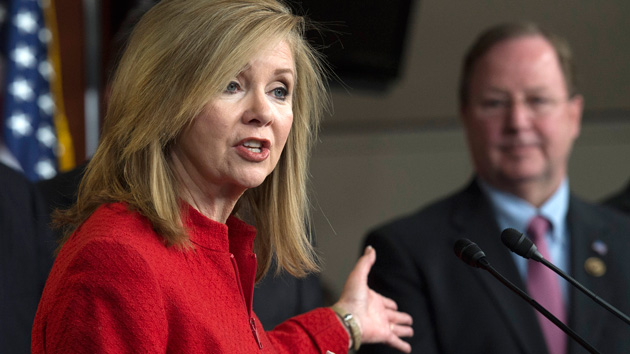 Rep. Marsha Blackburn (R-Tenn.) speaks during a news conference on Capitol Hill in Washington. A special House panel is moving ahead with its investigation of Planned Parenthood despite Democratic calls to shut it down after the Colorado shootings. Molly Riley/AP Photo

The House Energy and Commerce Committee panel that formed last October to investigate Planned Parenthood’s policies for handling fetal tissue has issued requests for documents to more than 30 agencies across the nation. The “Select Investigative Panel on Infant Lives” was formed by former House Speaker John Boehner as a final act before he stepped down over a possible government shutdown due to the battle over funding for Planned Parenthood.

Committee Chair Marsha Blackburn (R-Tenn.) announced last week that the committee had issued subpoenas to three of those groups because they “failed to fully cooperate with document requests.” The subpoenas went to Stem­Express, a California firm that provides human tissue for medical researchers, the University of New Mexico, whose Health Sciences Center conducts medical research using fetal tissue, and Southwestern Women’s Options, which has abortion clinics in Albuquerque, New Mexico, and Dallas that perform late-term abortions.

A letter from the panel’s Democratic members expressed outrage at the demands and called Rep. Blackburn’s subpoenas “unilateral and unjustifiable.” They urged the panel to “abandon your plan to issue subpoenas or immediately schedule a special meeting of the Select Panel in order to vote on your proposed use of compulsory process to force healthcare providers and others to disclose the names of doctors, medical students, and clinic personnel.” The Democratic members described the actions as “an abusive and unjustifiable use of the chair’s unilateral subpoena authority.”

Recalling the attack on a Planned Parenthood affiliate in Colorado—in which a gunman murdered three people and injured nine others, later saying in court that he was a “warrior for the babies”—Democrats expressed concern that the subpoenas could put the subjects of the investigation at risk.

This is not the first time StemExpress has found itself in the middle of controversy. As Mother Jones previously reported, the Placerville, California, tissue provider cut ties with Planned Parenthood after the Center for Medical Progress’ discredited sting videos, which purported to show evidence of the illegal sale of fetal tissue, prompted a congressional inquiry into Planned Parenthood and made StemExpress’ CEO, Cate Dyer, a target of anti-abortion trolls on Fox Nation. Dyer’s home address was posted alongside threats against her life.

The subpoena demands documentation of all entities from which fetal tissue was procured and documentation of recipients of tissue samples. It also requests the “name and title of all StemExpress current or former personnel whose responsibilities included procuring, researching, storing, packaging for donation, sale, transport, or disposal of fetal tissue, and the identity of any supervisory personnel under whom such individuals worked.” A statement from StemExpress said the company has been cooperative in all the government investigations thus far. “Throughout this process, StemExpress has continued to protect its clients’ confidentiality, and to abide by its legal obligations,” the statement reads. “The Select Investigative Panel now seeks confidential client information and the identity of individual scientists and researchers through the issuance of a subpoena.”

The University of New Mexico’s Health Science Center has used tissue from abortions conducted at Southwestern Women’s Options over the past decade for research aimed to improve outcomes for premature babies. In December, the Health Science Center halted their medical training program at the Albuquerque clinic, which teaches UMN School of Medicine fellows and residents specializing in reproductive health and family planning how to perform abortions, among other obstetric and gynecological procedures.

Also this week, a lawyer for New Mexico Alliance for Life filed a suit against the university that alleges the UNM Health Sciences Center violated the state Inspection of Public Records Act by failing to release documents from a 2015 study “that used extracted eyeballs from babies aborted up to 24 weeks gestation,” according to a statement from the anti-abortion group.  The committee subpoena to the University of New Mexico is along similar lines, requesting identities of employees who have worked with tissue, a list of tissue suppliers, and documentation of any UNM physician who assisted Southwestern Women’s Options as an abortion provider.

Meanwhile, the committee is waiting for the results of the subpoenas.

“While it was our hope that these organizations would voluntarily work with us in this effort, some have refused to cooperate by withholding information that is critical to providing us with answers to questions the American people are asking,” Blackburn said in a committee statement. “Consequently, if forced to do so, we will issue subpoenas to any organization that refuses to fully cooperate with our investigation.”