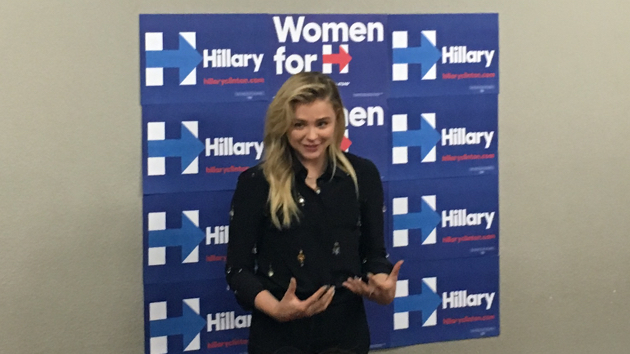 Millennials haven’t been kind to Hillary Clinton so far in the race for the Democratic presidential nomination. In Iowa, Sen. Bernie Sanders won the support of 84 percent of voters under age 30, to just 14 percent for Clinton. In New Hampshire, the margin was nearly identical, with Sanders beating Clinton 83 percent to 16 percent.

In an effort to change that trend in Nevada, which holds its Democratic caucuses on Saturday, Clinton tapped some celebrity power. On Thursday afternoon, 19-year-old actress Chloë Grace Moretz—known for roles in Kick-Ass, If I Stay, and 30 Rock—came to the University of Nevada-Las Vegas to get the college students excited for a Clinton presidency.

“It’s time, first of all, for a woman to be president,” she told the students. “And it’s about time that young boys and girls grow up in a time when there is no adversity about that, no ‘Can a woman be a leader of our country?'”

The group had to gather at a coffee shop across the street from campus because the university had banned political events at the school, a Clinton organizer explained. Perhaps the students were afraid to cross the street, since only about 20 showed up for the lunch-hour event. And in a sign of Clinton’s struggle to win over young voters, not everyone present was planning to caucus for her.

The first table of students I talked to included two undecided voters waffling between Clinton and Sanders, and one staunch Sanders fan. “I’m at this point where it’s pragmatism versus ideology,” said 24-year-old Zoe Friedland. “I understand and respect who she is in the political system. She’s incredible. And I wholeheartedly know that she could get stuff done. Because of that I’m still on the fence. Can I side with my heart that’s kind of airy fairy? “

Rachel Hershkovitz, also 24, shared that same indecision but began leaning toward Clinton as Sanders’ campaign took off and she started to envision what his presidency would actually look like. “I have come to recognize that he’d kind of be a lame-duck presidency,” she said. “A lot of his proposals aren’t going to come to fruition. But at the same time I can trust him not to create unnecessary wars. I know that bills that are going to pass aren’t going to discriminate against women, especially women of color.”

“Overall,” she continued, “I think Bernie is a man of integrity, and we like to see that as young people. It gets us excited.”

The students there who were committed to Clinton weren’t as politically active or excited by her campaign. “I don’t really know exactly what’s going on,” said 18-year-old Anastasia Reva. “I just know I support Hillary.”

All the students said the general atmosphere on campus at UNLV tilted far more toward feeling the Bern. After Moretz’s remarks, the Clinton organizers led her and the crowd over to the campus’ “free-speech zone,” the one place political groups were allowed to proselytize on campus. There, they were greeted by a swarm of Sanders volunteers who jeered that they’d been stumping in the free-speech zone for weeks without any competition from Clinton.

The Clinton group ignored the mocking and set up a table where Moretz drew a crowd, handing out pro-Hillary fliers and taking pictures with the UNLV students. Sanders is a “one-trick pony,” Moretz told one would-be voter. “He doesn’t have a lot of points.” 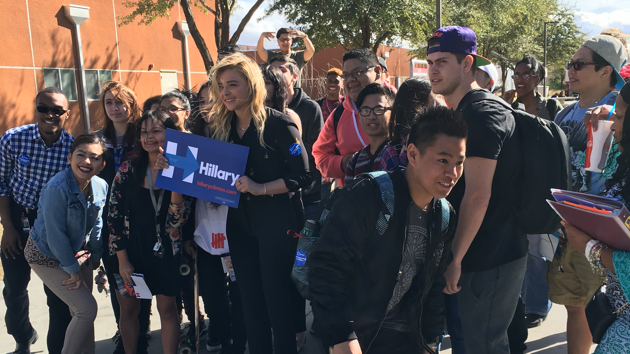 Even though the student body tilts toward Sanders, Clinton might not have to worry too much about a rush of UNLV students backing her opponent. Everyone described UNLV as a generally apathetic place when it comes to politics. “They say, ‘I’m going to vote, I’m not going to caucus,'” said recent graduate and Clinton supporter Caleb Green, predicting that most of the student body wouldn’t show up on Saturday. “It is kind of disengaged.”

After the group handed out fliers in the free-speech zone for 30 minutes, the line of selfie takers had been exhausted. Moretz huddled with the students for one last group photo, then began her trek back to the coffee shop. “Feel the Bern,” came a shout from the Sanders table, which had somehow procured a megaphone since Moretz arrived.

“Go Hillary,” she shouted back.