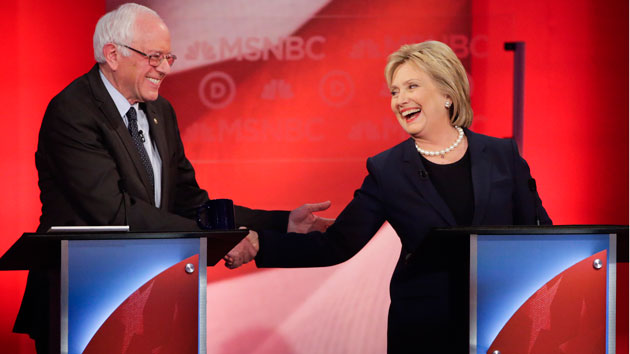 Both Hillary Clinton and Bernie Sanders have repeatedly emphasized the importance of protecting women’s reproductive rights, but mostly they’ve focused on domestic policy. Now, looking overseas, they say the United States should change the regulation of foreign aid for abortions.

The 1973 Helms amendment blocks the use of foreign aid for women who were raped in conflict zones or developing countries and seeking an abortion. The amendment states, “No foreign assistance funds may be used to pay for the performance of abortions as a method of family planning or to motivate or coerce any person to practice abortions.” The Hyde amendment, which was passed three years after the Helms amendment, prohibits federal funding from being used for elective abortions—abortions that are not because of incest, rape, or life endangerment.

“Sen. Sanders is opposed to the Helms amendment,” Arianna Jones, his deputy communications director, told the Huffington Post. “As president, he will sign an executive order to allow for U.S. foreign aid to pay for abortions in cases of rape, incest or when the life of the woman is at risk. He will also work with Congress to permanently repeal both the Hyde and Helms amendments.”

Clinton was asked about the Helms amendment during her Iowa campaign, where she said she thinks rape is being used increasingly as a war weapon.

“I do think we have to take a look at this for conflict zones,” Clinton said at the town hall, responding to a question from an audience member. “And if the United States government, because of very strong feelings against it, maintains our prohibition, then we are going to have to work through nonprofit groups and work with other countries to…provide the support and medical care that a lot of these women need.”

A Clinton campaign spokeswoman wrote in an email to the Huffington Post that Clinton would “fix” the Helms amendment: “The systematic use of rape as a tool of war is a tactic of vicious militias and insurgent and terrorist groups around the world. She saw first-hand as Secretary of State the suffering of survivors of sexual violence in armed conflict during her visit to Goma in 2009. She believes we should help women who have been raped in conflict get the care that they need.”