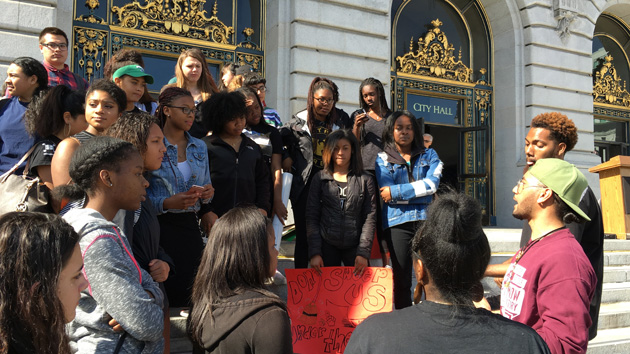 San Francisco’s Lowell High School is the city’s most coveted public, elite school that posts some of the highest test scores in the country. But when it comes to the treatment of its black students, young activists argue that the school is flunking—and needs to change. That’s the main message about 25 members of Lowell High’s Black Student Union delivered to the City Hall and San Francisco Unified School District today. The students walked out of classes in the morning and then marched toward the Civic Center area of the city, where they were greeted—unexpectedly—by several San Francisco school board members and San Francisco school chief Richard Carranza.

The protests were sparked by a number of incidents, but the most recent was a sign that was posted on a window at the school’s library earlier this month that read, “Black History Month” and included a Twitter hashtag below that read “#gang.” Chy’na Davis, a sophomore at Lowell High, told Mother Jones that while it was clear the message was offensive to black people, it took several days for the school administration to remove it. Davis said she appreciated that the school held an assembly to discuss the issue, but said that most of her friends who are not black left the meeting without an understanding of why the incident was offensive to black students.

Principal of Lowell High School, Andrew Ishibashi said that as soon as the administration learned about the poster, they removed it. “There is a possibility that it was up but it was not reported,” Ishibashi told Mother Jones.

The Afrikan Black Coalition is supporting the Black student walkout at Lowell High after a racist display. pic.twitter.com/VT6pZfoldT

“The poster was a straw on the camel’s back,” Davis explained, while five of her peers nodded in agreement. “There are so many small, daily incidents and comments that stereotype us.” Just last month, she says, a student asked her, “Did you eat fried chicken this weekend?” Another student joked to her friend while walking by Davis, “See, I have black friends. I’m ghetto.” 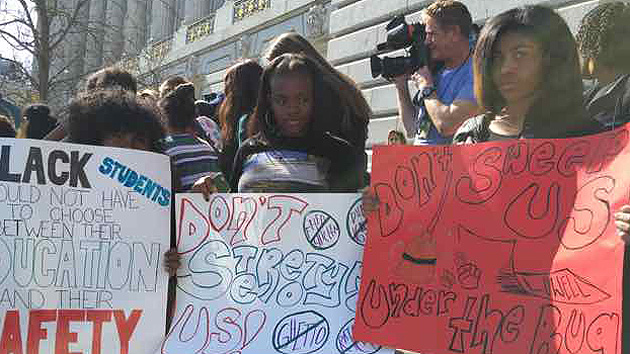 According to several students at the walkout today, some teachers intervene when they hear offensive remarks toward black students, but most don’t. There isn’t enough black history being taught at Lowell or discussions of police brutality or the Black Lives Matter movement, Davis and other members of the Black Student Union told Mother Jones. “We just feel like our individual complaints are not taken seriously by the school. So, we decided to take action together,” said Davis. She added that today’s walkouts were inspired by the national Black Lives Matter movement.

Lowell High school has 2,650 students, and only 2 percent of them are African American. In a letter sent to students shortly after Lowell High school administration removed the offensive sign, school principal Andrew W. Ishibashi said the school would institute more cultural-sensitivity training for students and staff.