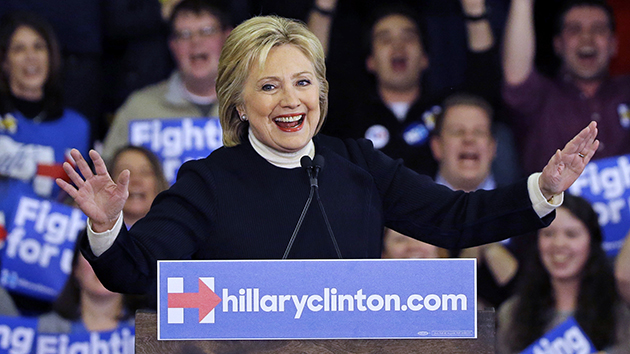 After a big loss to Bernie Sanders in the New Hampshire Democratic primary Tuesday, Hillary Clinton used her concession speech to shift the focus to the South Carolina and Nevada contests and beyond, and to tout her progressive credentials on issues that have dominated Sanders’ rising campaign—namely campaign finance reform and the power of Wall Street.

“We’re going to fight for real solutions that make a real difference in people’s lives,” she said. “That is the fight we are taking to the country. What is the best way to change people’s lives so we can all grow together? Who is the best change-maker? And here’s what I promise: I will work harder than anyone to actually make the changes that make your lives better.”

Clinton recalled that the Supreme Court’s Citizens United decision was instigated by a conservative group attempting to air an anti-Hillary Clinton film in 2008—a point she hasn’t yet incorporated into her stump speech or raised in debates. “So yes, you’re not going to find anyone more committed to aggressive campaign finance reform than me,” Clinton told the cheering crowd, her voice hoarse from campaigning.

From there, Clinton promised to take on Wall Street as well. “We also agree that Wall Street can never be allowed to threaten Main Street,” Clinton said, arguing that she and Sanders are in agreement on the issue of reining in the financial sector. “And you know what? I know how to do it. So when I tell you, ‘No bank can be too big to fail and no executive too powerful to jail,’ you can count on it.”

Clinton also challenged the idea that her campaign is propped up by the establishment, while Sanders’ is driven by the American people. “More than 700,000 have contributed to this campaign,” she said. “You are the reason we are here and you are the reason we are going to win this nomination.” (Sanders, in his victory speech, touted the fact that over 1 million people have contributed to his campaign.)

Clinton’s speech stressed the plight of the poor and minorities in the United States. Minority voters play a large role in the upcoming caucus in Nevada and then in the South Carolina primary—two states whose populations are more diverse than Iowa’s and New Hampshire’s. Clinton described herself as fighting a lifelong battle for the poor and minorities, including her work at the Children’s Defense Fund after law school. “A president has to do all parts of the job for all Americans to make sure nothing holds you back—not debt, not discrimination, not a deck that is always stacked for those at the top,” she said. And Clinton drew big applause when, at the end of her speech, she launched into a call for “human rights across the board for every single American…human rights as women’s rights, human rights as gay rights, human rights as worker rights.”

Clinton’s upbeat demeanor, despite a loss of about 20 points as of 10 p.m. Tuesday, was echoed by her staff at her campaign’s Tuesday night rally, where they handed out campaign literature about the support of African Americans and mothers, and upcoming endorsements from South Carolina, which will hold its Democratic primary on February 27. And before the polls had even closed, Clinton’s campaign manager, Robbie Mook, had circulated a memo to the press emphasizing the importance of the March primary contests. But perhaps it wasn’t a coincidence that, despite Clinton’s sunny outlook, televisions at the party were not showing supporters the night’s sobering election results.

Russ Choma contributed to this report from New Hampshire.