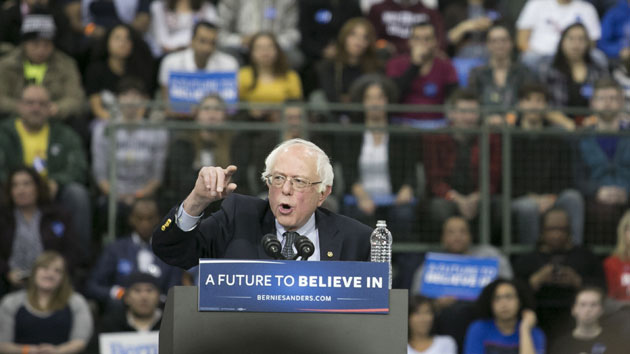 With one day to go before the South Carolina primary, Bernie Sanders’ surrogates unleashed some of their toughest attacks yet on Hillary Clinton.

During the Vermont senator’s appearance at a historically black university, a string of speakers, including rapper Killer Mike, slammed the former secretary of state as a latecomer to racial justice who was taking African American voters for granted ahead of the South’s first Democratic primary on Saturday.

“We have to understand that this genocide on black lives has been a thing for decades,” said Johnson, who made national headlines last fall after he was bloodied by the police while trying to get into a Charlottesville bar. “And a candidate who’s actually speaking to people nearby today was helpful in approving these things to happen [with] mass incarceration.” (Johnson was referring to Clinton’s support as First Lady for President Bill Clinton’s 1994 crime bill.)

Former Ohio state Sen. Nina Turner kept the hits coming, attacking the idea that African American voters are, as the Clinton campaign has suggested, an electoral firewall against the Vermont senator as the campaign careens toward Super Tuesday.

The toughest talk, though, came from Killer Mike, the Atlanta rapper, who came under fire last week for relating the story of a woman who said women shouldn’t vote for Clinton just because she has a uterus. Sanders accused his friend’s critics of playing “gotcha politics.” Killer Mike never explained to the crowd at Claflin what it was he’d said to piss people off, but his first words on stage were an inside joke that alluded to the controversy: “Let me pull out the list of words I cannot say.”

“And just last week, when given the opportunity to separate himself from a black guy who said something that other people didn’t like, he stood on his integrity and his convictions,” he said. “That means when you’re in office and a hard decision is gonna be made, you’re gonna think about the people you talked with as well.”

He didn’t reprise his “uterus” comments, but he had plenty to say about Clinton. The Democratic front-runner, or at least her supporters, had been rude to an African American who questioned her past statements on crime, Killer Mike told students. He contrasted that with an early moment in the campaign when Sanders handed his microphone to two Black Lives Matter activists at a rally in Seattle.

“That is a firm difference from turning around and staring at a little black girl and saying, ‘Shut up, I’ll talk to you later, you’re being rude.'” It was just as bad to allow “other people to say it to her,” he said.

The rapper also went on to praise Sanders’ work during the civil rights movement. “If I can find a picture of you from 51 years ago chained to a black woman protesting segregation, and I know 51 years later you’re gonna close your arms…and listen to two black girls yell and scream—rightfully so.” (Sanders was arrested at a civil rights demonstration when he was a student at the University of Chicago in the 1960s*.)

“As opposed to someone who will tell you ‘later,’ when it comes to your children dying in the streets,” the rapper said. “I know the only person that I have the conscience to vote for is Bernard Sanders.”

Sanders thanked Killer Mike and the speakers who preceded him “for their calm and quiet introductions,” but the Vermont senator not did not elaborate on their comments. Instead, he dove into a more casual version of his standard stump speech, hitting voting rights, police violence, student debt, and the corrupting influence of super-PACs. He kept a lighter tone with the mostly college-age crowd.

When his microphone briefly cut out, he quipped, “it’s my electrifying personality.”

Sanders received a warm welcome from his audience, which was uncharacteristically small for a candidate used to a rock-star reception on college campuses. Although his campaign has worked hard to organize at historic black colleges and universities and made previous trips to Orangeburg, one side of the bleachers was entirely empty and the other was a quarter full; there was plenty of space to move around on the floor. That may not bode well for Sanders’ chances on Saturday—the most recent polls put him about 20 points back.

But if a win feels like a long shot, Sanders’ aggressive event on Friday was meant to show a commitment to improvement going forward. As Killer Mike put it, “The goddamn firewall has a crack in it.”

Correction: This piece originally misidentified the photo Killer Mike was referring to.