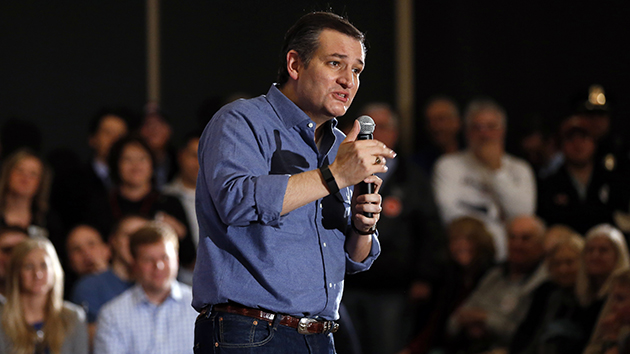 Remember this summer when Ted Cruz refused to attack Donald Trump? Now, it seems, the Cruz campaign is making up for lost time. With polls  showing Trump in the lead in Iowa—and only a few days left for Cruz to overtake him—Cruz and his surrogates are now tearing into Trump with all they’ve got. The game plan: Convince Iowans that Trump is a liberal masquerading as a Republican.

On Wednesday night, a jam-packed rally for Cruz in West Des Moines started to feel a lot like an anti-Trump rally.

Whether or not the Trump attacks will win the day for Cruz, the audience at Wednesday’s gathering ate them up. The rally, which was billed as a pro-life event, drew leaders of the religious right and other socially conservative Cruz backers, such as Rep. Steve King of Iowa and former Texas Gov. Rick Perry. Here are the top attacks on Trump from the event.

Down with the “art of the deal”: Donald Trump likes to talk up his book, The Art of the Deal, promising that as president, he would make good deals for the United States. These promises are a little vague, but the gist is that President Barack Obama is weak and a poor negotiator—an oft-cited example is the nuclear agreement with Iran—and that, by contrast, Trump knows how to drive a hard bargain. At the rally Wednesday, Bob Vander Plaats, a prominent social conservative in Iowa who has endorsed Cruz, characterized Trump’s deal-making as code for compromising on conservative principles.

“[Trump] says the establishment is warming up to him because he’s all about the art of the deal,” Vander Plaats, one of several surrogates who spoke on Cruz’s behalf Wednesday evening, told the crowd. “I’ll tell you right now, the sanctity of life is not up for the art of the deal.” To whistles and cheers, he added a few more items not subject to negotiation: “God’s design for marriage and family,” “religious liberty,” and the Constitution.

If you don’t vote for Cruz, you’re voting for Trump: The Cruz campaign has recently embraced the message that if voters choose anyone but Cruz, they are throwing their votes away and helping Trump win. “This is race is going to come down to two individuals: Donald Trump and Ted Cruz,” Vander Plaats told the crowd. “So if you want to vote for anybody else, I’d say that vote goes to Donald Trump unless you vote for Ted Cruz.”

Vander Plaats is one of the latest victims of Trump’s classic Twitter attacks. Trump went after Vander Plaats, who heads a conservative Christian organization, The Family Leader, this week, calling him “phony” and “a bad guy!” Vander Plaats pushed back against those attacks on Twitter and at Cruz’s rally Wednesday, where he claimed victory in their Twitter spat. “We fought back and we won that Twitter war, ’cause the truth was on our side,” he said.

“You’re fired!”: For the second time in as many nights, Cruz laid into Trump for backing out of the next Republican debate on Thursday night, even taking a stab at Trump’s famous line from his reality show The Apprentice. “This is a job interview,” Cruz said. “I want you to imagine you put up an ad in the help-wanted pages, looking for a new employee to administer the government and turn the ship of state around. And imagine someone called you and said, ‘Yeah I’d like that job but I ain’t showing up for the interview.’ What would you say? ‘You’re fired.'”

Cruz then extended Trump an offer to debate one on one on Saturday night at Western Iowa Tech in Sioux City. “We already have it reserved,” he said. “So we have a venue, we have a time, all we’re missing is a candidate.”

“Trumpcare”: “In a Republican primary, everyone’s going to say they oppose Obamacare,” Cruz said. “The question to ask, once again, is where were you? There’s actually one candidate on that stage—or actually, technically speaking now, not on that stage—who doesn’t say that. Listen, Donald Trump’s position on health care is he supports Bernie Sanders-style socialized medicine for everyone.”

“We have Hillarycare, then Obamacare, and Trumpcare is socialized medicine for every American,” Cruz said. “Now listen, Donald is entitled to have that view. You might even call that a New York value”—a reiteration of an attack line he’s used recently to convince voters that Trump is a blue-state liberal in disguise. “Both he and Bernie Sanders are native New Yorkers.”

The “Trumpcare” attack was nearly identical in language to a new ad one of the super-PACs backing Cruz began airing this week in Iowa.