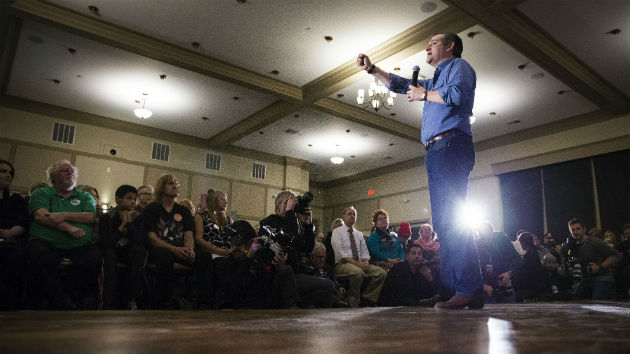 During a campaign stop in Des Moines, Iowa, on Wednesday, Texas Sen. Ted Cruz said he’s created an anti-abortion group that will “champion every child, born and unborn.” The Pro-Lifers for Cruz coalition already has more than 17,000 members, according to a press release, and will be chaired by Tony Perkins, the anti-LGBT president of the Family Research Council who recently said same-sex marriage is responsible for “havoc in our homes and blood in our streets.” Florida Sen. Marco Rubio has also created a committee, but Cruz has cornered some of the more extreme members of the anti-abortion movement.

Also heading up the coalition are 11 anti-abortion co-chairs “representing virtually every perspective on the pro-life spectrum.” One of those perspectives is that of Troy Newman, the president of Operation Rescue and a board member of the Center for Medical Progress, the group behind the debunked Planned Parenthood videos, whose founder David Daleiden was recently indicted for alleged crimes in connection to the videos. In his announcement on Wednesday, Cruz called Newman’s group “one of the leading pro-life Christian activist organizations in the nation.”

Newman has been involved in anti-abortion organizing for decades, and in 1999 he became the president of Operation Rescue, a group with a long history devoted to shuttering abortion clinics. In 2000 he published the book Their Blood Cries Out, in which he calls abortion doctors “blood-guilty.” In a passage of the book, which is now out of print, Newman wrote that “the United States government has abrogated its responsibility to properly deal with the blood-guilty. This responsibility rightly involves executing convicted murderers, including abortionists, for their crimes in order to expunge bloodguilt [sic] from the land and people.”

In 2002, Newman moved Operation Rescue headquarters from Southern California to Wichita, Kansas, the home of Dr. George Tiller, one of the only later-term abortion providers in the country at the time. Tiller was shot to death while volunteering as an usher for his church. Scott Roeder, 51, who participated in Operation Rescue events and protests in Wichita, was eventually sentenced to 50 years in prison for the murder. Newman immediately distanced himself from Roeder following Tiller’s death. Operation Rescue’s senior vice president is Cheryl Sullenger, who in the late 1980s served two years in federal prison for conspiring to bomb an abortion clinic.

A year after moving to Wichita, Newman commented on the state execution of Paul Hill, a man convicted of murdering a Florida-based abortion provider and his volunteer escort. In a joint press release, Newman’s Operation Rescue and another pro-life organization wrote that Hill’s execution was unjust because “there are many examples where taking the life in defense of innocent human beings is legally justified and permissible under the law…Execution under these circumstances is nothing less than murder of a political prisoner.”

Last October, Newman, who had been scheduled to speak at an anti-abortion event, was deported from Australia because government officials thought he would be “a threat to good order” and that his views on abortion could compromise the safety and well-being of women seeking abortions. Newman has recently claimed that the ongoing drought in California is caused by abortion: “Is it no wonder that California is experiencing the worst drought in history when it is the largest child-killer in all of the United States?”

Ken Cuccinelli, the former state senator and attorney general of Virginia who has said he opposes abortion even when the pregnancy is a health risk to the woman, is another co-chair of the committee. So is Gianna Jessen, who calls herself an “abortion survivor” because she was born after her mother failed an attempted saline abortion. A disability activist, she testified against Planned Parenthood during the House’s investigation last year.

“I always say that men are born to defend women and children, not sit idly by, or be passive when they are being harmed,” Jessen is quoted as saying on Cruz’s website. “Senator Cruz has been absolutely courageous in his defense of the unborn, and willing to stand alone.”