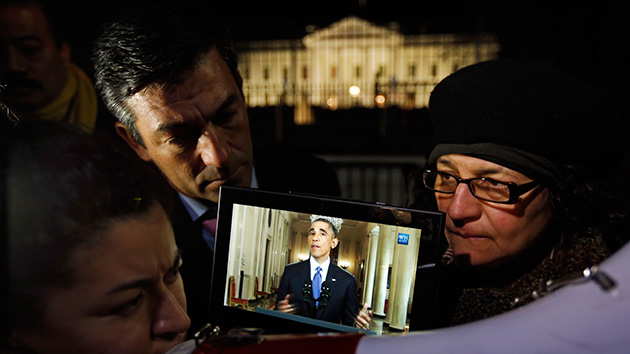 The Republican presidential candidates have been slamming his policies from the right for months. But the recent deportation raids on Central American mothers and children have opened up Obama to renewed criticisms from the left too: In last night’s Iowa Brown & Black Forum, Univision’s Jorge Ramos even asked presidential candidate Hillary Clinton, “Will you become the next deporter-in-chief?” (Clinton said no and told Ramos she didn’t think the raids were “an appropriate tool to enforce the immigration laws.”) And while the raids were meant to discourage the continuing surge of people from El Salvador, Guatemala, and Honduras, the news from the border isn’t good: According to new statistics released Tuesday by US Border and Customs Protection, the number of Central American kids and families apprehended there keeps rising sharply.

So what will Obama say about immigration in his final State of the Union address Tuesday night? He’s mentioned it in all but his first SOTU, though we seem light-years away from his exhortations to Congress to “get it done”—”it” being the comprehensive immigration reform that has long eluded him. Here’s what he’s said and focused on, year by year:

“And we should continue the work of fixing our broken immigration system, to secure our borders and enforce our laws and ensure that everyone who plays by the rules can contribute to our economy and enrich our nation. In the end, it’s our ideals, our values, that built America, values that allowed us to forge a nation made up of immigrants from every corner of the globe, values that drive our citizens still.”

“One last point about education: Today, there are hundreds of thousands of students excelling in our schools who are not American citizens. Some are the children of undocumented workers, who had nothing to do with the actions of their parents. They grew up as Americans and pledge allegiance to our flag, and yet they live every day with the threat of deportation. Others come here from abroad to study in our colleges and universities. But as soon as they obtain advanced degrees, we send them back home to compete against us. It makes no sense.

“Let’s stop expelling talented, responsible young people who could be staffing our research labs or starting a new business, who could be further enriching this nation.”

“Now, I strongly believe that we should take on, once and for all, the issue of illegal immigration. And I am prepared to work with Republicans and Democrats to protect our borders, enforce our laws, and address the millions of undocumented workers who are now living in the shadows. I know that debate will be difficult. I know it will take time. But tonight, let’s agree to make that effort. And let’s stop expelling talented, responsible young people who could be staffing our research labs or starting a new business, who could be further enriching this nation.”

“Let’s also remember that hundreds of thousands of talented, hard-working students in this country face another challenge: the fact that they aren’t yet American citizens. Many were brought here as small children, are American through and through, yet they live every day with the threat of deportation. Others came more recently, to study business and science and engineering, but as soon as they get their degree, we send them home to invent new products and create new jobs somewhere else. That doesn’t make sense.

“I believe as strongly as ever that we should take on illegal immigration. That’s why my administration has put more boots on the border than ever before. That’s why there are fewer illegal crossings than when I took office. The opponents of action are out of excuses. We should be working on comprehensive immigration reform right now.

“But if election-year politics keeps Congress from acting on a comprehensive plan, let’s at least agree to stop expelling responsible young people who want to staff our labs, start new businesses, defend this country. Send me a law that gives them the chance to earn their citizenship. I will sign it right away.”

“Real reform means stronger border security, and we can build on the progress my administration has already made: putting more boots on the southern border than at any time in our history and reducing illegal crossings to their lowest levels in 40 years.

“Real reform means establishing a responsible pathway to earned citizenship, a path that includes passing a background check, paying taxes and a meaningful penalty, learning English, and going to the back of the line behind the folks trying to come here legally.

“Send me a comprehensive immigration reform bill in the next few months, and I will sign it right away. And America will be better for it. Let’s get it done.”

“And real reform means fixing the legal immigration system to cut waiting periods and attract the highly skilled entrepreneurs and engineers that will help create jobs and grow our economy.

“In other words, we know what needs to be done. And as we speak, bipartisan groups in both chambers are working diligently to draft a bill, and I applaud their efforts. So let’s get this done. Send me a comprehensive immigration reform bill in the next few months, and I will sign it right away. And America will be better for it. Let’s get it done. [Applause.] Let’s get it done.”

“Finally, if we’re serious about economic growth, it is time to heed the call of business leaders, labor leaders, faith leaders, law enforcement and fix our broken immigration system. Republicans and Democrats in the Senate have acted, and I know that members of both parties in the House want to do the same. Independent economists say immigration reform will grow our economy and shrink our deficits by almost $1 trillion in the next two decades. And for good reason: When people come here to fulfill their dreams—to study, invent, contribute to our culture—they make our country a more attractive place for businesses to locate and create jobs for everybody. So let’s get immigration reform done this year. [Applause.] Let’s get it done. It’s time.”

“Yes, passions still fly on immigration, but surely we can all see something of ourselves in the striving young student and agree that no one benefits when a hard-working mom is snatched from her child and that it’s possible to shape a law that upholds our tradition as a nation of laws and a nation of immigrants. I’ve talked to Republicans and Democrats about that. That’s something that we can share.”