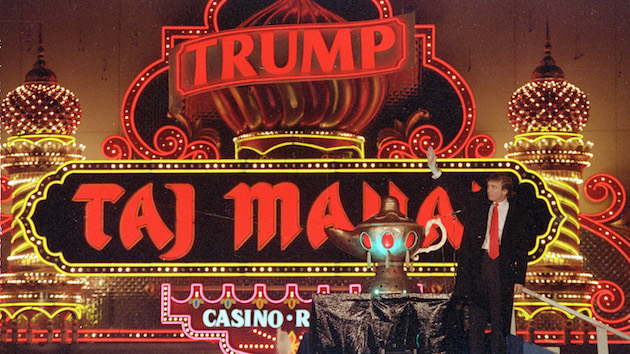 Donald Trump says he gets things done that mere mortals can’t. This claim has propelled his campaign for the GOP presidential nomination—much to his critics’ alarm—as well as his books and a successful television show. But a Washington Post investigation reveals that when the mogul sold this message to New Jersey gambling regulators more than two decades ago, he overstated his resources—and a lot of people paid a very high price.

As the Post reports, in the late ’80s, Trump was angling to buy his third casino in Atlantic City, New Jersey. His choice was the unfinished Taj Mahal, which was poised to become the biggest casino-hotel complex in the world. But to close the deal, Trump had to persuade state gambling regulators that he could get the financing to finish construction.

At a hearing in 1988, Trump assured regulators that his reputation would secure him the necessary financing. In particular, he said he could get loans at prime rates—the interest rate that commercial banks offer their most trusted customers—rather than so-called “junk bonds.”

“I can use my own funds or I can use regular bank borrowings, so I can build at the prime rate,” Trump said, according to transcripts obtained by the Post. “I mean, the banks call me all the time. ‘Can we loan you money? Can we do this? Can we do that?’ “

Trump continued with a line that could be straight out of one of his campaign speeches: “I get it done, and everybody is happy, and it turns out successfully.”

But he did not get it done, and everybody was not happy. While the regulators approved Trump’s casino license, the promised prime-rate loans never materialized, and Trump turned to the very junk bonds he had disparaged. “He agreed to pay the bond lenders 14 percent interest, roughly 50 percent more than he projected, to raise $675 million. It was the biggest gamble of his career,” Post reporter Robert O’Harrow Jr. wrote.

In April 1990, the Taj Mahal opened its doors in an over-the-top extravaganza attended by Michael Jackson. By March 1991, Trump was falling behind on payments for $1.1 billion in loans across his business empire. A few months later, the Taj Mahal filed for bankruptcy. While large institutional lenders suffered the worst hit, minor investors who had bought the bonds and small-business owners who had done business with Trump’s casinos lost big, too, according to the Post.

As for the person at the center of the collapse, in an interview with the Post Trump denied that the Taj Mahal’s bankruptcy had any impact on his personal wealth. (Trump has never filed for personal bankruptcy.) But the Post’s findings indicate the contrary. Trump had full ownership of the Taj Mahal, the newspaper found, and after its fall, the businessman relinquished half his stake in three casinos and sold his 282-foot Trump Princess yacht, among other assets. The Post also found that Trump may have exaggerated his personal wealth: The mogul said in 1990 that he was worth $1.4 billion, but Forbes estimated he was worth $500 million. The state casino commission estimated in 1991 that, after liabilities, Trump was worth just $206 million.

True to form, Trump continues to paint the deal as just one more triumph. “The Taj Mahal was a very successful job for me,” he told the Post. “I got out great.”