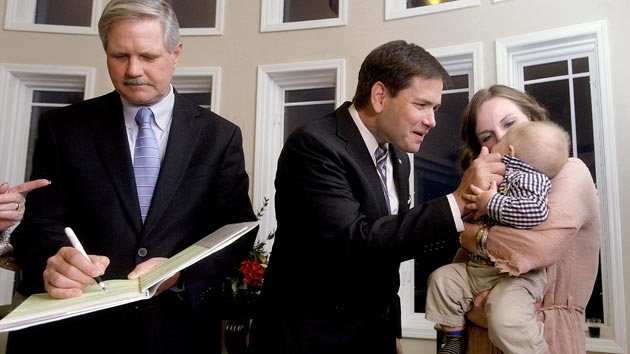 With the days dwindling until the start of the Iowa caucuses on February 1, GOP presidential hopeful Sen. Marco Rubio has been shoring up his strong pro-life stance. His latest move is the creation of a pro-life advisory board, populated by nearly a dozen of the anti-abortion movement’s most prominent leaders.

In a field crowded with anti-abortion candidates, Rubio has staked out one of the most extreme positions. During a GOP debate in August, Rubio appeared to toughen his stance quite publicly: He implied that he supported abortion bans with no exception for victims of rape and incest, a stance that even some other GOP presidential candidates, including Jeb Bush and Chris Christie, consider excessive. Previously, Rubio supported at least two bills that contained these exceptions when they were proposed in the Senate.

On Saturday, his campaign released a new TV ad, showing him against a dark backdrop discussing his anti-abortion stance. He said abortion is “not a political issue, it’s a human rights issue,” and he spoke specifically about late-term abortions of “children who are viable outside the womb.” (About 1 percent of US abortions occur after 21 weeks.) Two days later, during a campaign stop in Iowa, Rubio reiterated his anti-abortion stance and promised to defund Planned Parenthood.

The next day, he told LifeNews, an anti-abortion news site, that he has established a new committee to advise him on his pro-life stance and strategy throughout his presidential campaign. (The Rubio campaign did not respond to Mother Jones‘ request for comment.)

“The inherent dignity of every human life is the foundational principle on which America was founded,” Rubio told LifeNews. “Someday, hopefully in our lifetimes, but certainly someday, Americans will look back and wonder how we could possibly have been so barbaric.”

The committee includes leaders from the evangelical community, as well as several professors, activists, and attorneys. One of the members is George Mason University law professor Helen Alvaré, who told Mother Jones that she would be providing advice to the Rubio campaign informed by her “pro-life feminist scholarship.”

Another member is Abby Johnson, a former director at a Planned Parenthood clinic who has since become an anti-abortion activist. Today, she is the founder of the nonprofit And Then There Were None, which helps abortion providers who no longer want to work in the profession. Johnson told Mother Jones that when she got an email from Rubio’s team asking for her assistance on his pro-life strategy team, she knew immediately that she wanted to help.

“Senator Rubio has taken a strong pro-life stance and will continue to unapologetically defend innocent human life,” Johnson writes in an email. “I believe that because of my intimate knowledge of the abortion industry, I can help him craft talking points surrounding issues specifically related to abortion legislation, clinic regulations and other similar topics…[W]e need to do a better job of getting a message of love out to the masses and it will be an honor to help do that through this committee.”