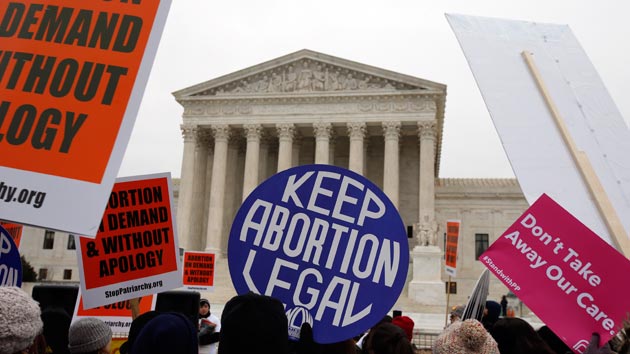 In February 2013, Arkansas passed the Human Heartbeat Protection Act, a bill outlawing abortions after 12 weeks of pregnancy if a heartbeat is detected. The new law came at a fine moment for the state’s anti-abortion legislators: In recent months, they’d passed a bill doubling the state’s mandated abortion waiting period, and had passed a 20-week ban on abortion.

The 12-week ban, however, was at the time the most restrictive abortion ban passed not only in the state, but in the nation. A pair of Arkansas doctors challenged the bill as unconstitutional and two lower courts prevented the ban from going into effect. Today, the Supreme Court rejected Arkansas’ bid for reconsideration of the abortion ban. The high court’s decision not to take this case, Edwards v. Beck, and to uphold lower courts’ decisions to throw out Arkansas’ law, could send a signal and help curb early abortion bans in other states.

“Arkansas politicians cannot pick and choose which parts of the Constitution they want to uphold,” Nancy Northup, president and CEO of the Center for Reproductive Rights (CRR), said in a statement on Tuesday. “The Supreme Court has never wavered in affirming that every woman has a right to safely and legally end a pregnancy in the US—and this extreme abortion ban was a direct affront to that right.”

When this bill was first passed, pro-choice advocates and medical professionals pointed out that at 12 weeks most fetuses may have a heartbeat, but none are viable. Viability is the critical point when a fetus is sufficiently developed so it can survive outside the womb. In 1973, Roe v. Wade introduced viability as a standard and established that women have the right to an abortion until the end of their second trimester of pregnancy—about 27 weeks. Nineteen years later, in Planned Parenthood v. Casey, the high court shifted the time limit discussion from trimesters to one of viability, ruling that states can only outlaw abortions of viable fetuses.

But what is the exact point at which a fetus is viable? In Casey, the court ruled that viability begins at 23 or 24 weeks, slightly before the end of the second trimester, in part because medical advances have made it possible for some pregnancies to be viable at that point.

When proposed in 2013, the Arkansas bill moved swiftly through the state legislature, even though the 12-week cut-off clearly violated the Supreme Court’s decision on fetal viability. It was vetoed by Democratic Gov. Mike Beebe in March 2013, but within two days, the Legislature overrode his veto and passed the bill into law. A month later, two local physicians and some of their patients sued the state medical board, asking the court to bar the law from going into effect. In 2014, two courts—first a district court, and later the 8th Circuit Court of Appeals—threw out the ban, ruling that there was no evidence a fetus can be viable at 12 weeks.

Oddly enough, the Arkansas Medical Board made no effort to make a scientific case for 12-week viability. “The only factual record presented in this case was by plaintiffs,” wrote one 8th Circuit judge, pointing to the testimony and data the doctors had presented showing that a 12-week fetus can’t survive outside the womb. “The State offered no competing evidence” on fetal viability, wrote the district court judge.

In asking the Supreme Court to review this case, Arkansas made the argument that viability is an outdated standard and that the law should allow states to get involved with a woman’s decision-making at an earlier point in her pregnancy. The brief noted: “This case is about the impropriety of a judicially-imposed rule that sets in stone ‘viability’ as the point before which the State’s profound interests must give way to a woman’s desire to terminate her pregnancy.”

Despite the Supreme Court’s rulings on viability, 15 states have since 2010 passed abortion bans that would outlaw the procedure at 20 weeks, or earlier. Many of these so-called “fetal pain” bills—model legislation originally drafted by the anti-abortion National Right to Life Committee—base the 20-week cut-off on the medically incorrect assertion that a fetus can feel pain at that point in its development. Now that the Supreme Court has rejected this case, the viability standard established over decades of Supreme Court jurisprudence remains intact—for now.

After today’s decision, advocates on both sides of the abortion debate are turning their focus back to a pivotal case challenging a Texas abortion law that is before the Supreme Court this term, Whole Woman’s Health v. Cole. Arguments are scheduled for March 2, and a decision will be announced later this year.

“We now look to the Justices to ensure Texas women are not robbed of their health, dignity, and rights,” said CRR’s Northup in today’s statement.