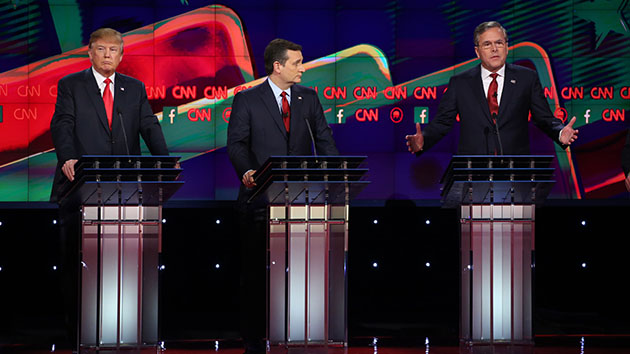 The stakes in Las Vegas were high on Tuesday night, as the nine leading Republican presidential candidates met once again for the last Republican debate of 2015. The event took place at the Venetian, the hotel-casino owned by GOP megadonor Sheldon Adelson, who was sitting in the front row, and it aired on CNN. The conversation centered on terrorism in the wake of the attacks in Paris and the San Bernardino shooting—but the candidates took every opportunity to sneak in digs at their rivals on a wide range of subjects.

Though the simmering rivalry between Sens. Ted Cruz and Marco Rubio was expected to take center stage, it was just one of many disputes that broke out during the debate. Donald Trump and Jeb Bush butted heads several times: Trump attempted to dismiss Bush with a reference to his flagging campaign, while Bush tried to make the case that Trump is not a serious candidate. Rand Paul had a combative evening as well, taking the fight to Rubio over immigration and to the group as a whole over foreign policy.

Meanwhile, Carly Fiorina, John Kasich, and Chris Christie tried to cut into the bickering by pointing out that they are the outsiders who will stop bickering and get things done.

Here are the highlights—and lowlights—from the fifth Republican presidential debate.

Rubio and Cruz take their long-simmering foreign policy conflict to the stage: Egged on by moderator Wolf Blitzer, Rubio launched an attack against Cruz’s record on defense. “Three times he voted against the Defense Authorization Act, which is a bill that funds the troops,” Rubio said. “And I have to assume that if you vote against it in the Senate, you would also veto it as president.”

“You can’t carpet bomb ISIS if you don’t have planes and bombs to attack them with,” Rubio continued.

Cruz responded by tying Rubio to President Barack Obama and Hillary Clinton, whom he claims destabilized the Middle East and opened the region to “radical Islamic terrorists.” But Cruz also used the moment to draw a distinction with Rubio over their foreign policy approaches. “We need to focus on killing the bad guys,” he said, “not getting stuck in Middle Eastern civil wars that don’t keep America safe.”

Trump’s response? “So they can kill us but we can’t kill them? That’s what you’re saying?”

Trump would be willing to shut down parts of the internet to keep ISIS out: In his bid to claim his spot as the most anti-ISIS candidate, Trump has suggested that he’d keep the group off the internet. How exactly, Blitzer wondered, would Trump achieve this? Was he worried about the implications for freedom of speech?

Trump wasn’t worried. “You talk freedom of speech, you talk freedom of anything you want,” Trump said. “I don’t want them using our internet.” His explanation was short on details—”I wanted to get our brilliant people from Silicon Valley and other places and figure out a way that ISIS cannot do what they’re doing”—but rest assured, Trump would shut that all down. “I sure as hell don’t want to let people that want to kill us and kill our nation use our internet,” he said.

Jeb finally pounces on Trump: “Donald, you’re not going to be able to insult your way to the presidency,” Bush said about 45 minutes into the debate, midway through a minor skirmish with Bush. The former Florida governor came into the debate clearly angling to diminish Trump’s standing as the front-runner. “This is another example of the lack of seriousness,” Bush said of Trump’s line about ISIS family members. “It’s just crazy. It makes no sense to suggest this.”

Bush had opened the night rebutting Trump’s proposal to ban all Muslim visitors from the country, saying it was not a serious proposal. “Donald is great at the one-liners,” Bush said, “but he is a chaos candidate, and he would be a chaos president.”

Trump hits back at Jeb: But Trump didn’t let Bush get the last laugh. Later in the debate, Trump steamrolled the former Florida governor. “This is a tough business, to run for president,” Bush said sternly in a back-and-forth with Trump. “Oh yeah,” Trump said sarcastically, almost rolling his eyes, “you’re a real tough guy Jeb, I know.”

“You’re never going to be president of the United States by insulting your way to the presidency,” Bush responded, perking up with life. But alas for Jeb, Trump was ready with a zinger. “I’m at 42 [percent] and you’re at 3,” Trump quipped. “So far I’m doing better, so far I’m doing better. You know you started off over here, Jeb”—Trump pointed next to himself at center stage—”you’re moving over further and further. Pretty soon you’re going to be off the end.”

Fiorina claims she aided government intelligence work after 9/11: “Let me tell you a story,” she said. “Soon after 9/11, I got a phone call from the NSA. They needed help. I gave them help. I stopped a truckload of equipment. I had it turned around. It was escorted by the NSA into headquarters.”

As recounted recently in a story by Yahoo News, as CEO of Hewlett-Packard, Fiorina got a call from NSA chief Michael Hayden, who needed computer equipment for a secret new program. Fiorina chose to help and rerouted a shipment of computer servers headed to a retailer to the National Security Agency instead. Those servers were used in the secret, warrantless collection of data that was exposed in 2013 by Edward Snowden.

Paul calls Christie Dr. Strangelove: Christie was vehement: A no-fly zone meant no planes would be flying over Syria, even if that required attacking a Russian aircraft.

“Well, I think if you’re in favor of World War III, you have your candidate,” Paul said in response, pointing to Christie, who was standing right beside him. “Here’s the thing. My goodness, what we want in a leader is someone with judgment, not someone who is so reckless as to stand on the stage and say, ‘Yes, I’m jumping up and down, I’m going to shoot down Russian planes.'”