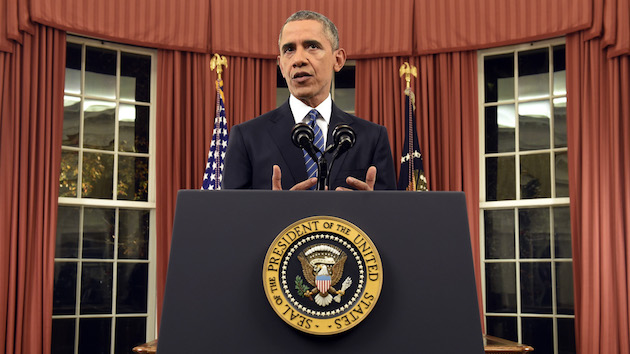 On Sunday night, President Barack Obama gave a speech on terrorism that the New York Times cast as an effort “to calm jittery Americans after the terrorist attack last week” in San Bernardino, California. But can Obama accomplish that mission? That is, can any president, with words, ease public anxiety over this sort of act? And, perhaps more important, how much can any president do to prevent a repeat of that horror?

In a highly political season—as Republican presidential candidates desperately maneuver for advantage before the voting starts in their party’s primaries and caucuses—Obama has a tough task: to present the campaign against ISIS, Al Qaeda, and other extremists in the proper context. A recent MSNBC/Telemundo/Marist poll—which was taken before the San Bernardino attack but after the Paris attacks and the Planned Parenthood shootings in Colorado—found that the biggest concern for many Americans was being a victim of terrorism. Thirty-six percent tagged terrorism as their top concern, and 31 percent said gun violence. (Six out of ten Republicans said terrorism was their greatest fear; only 22 percent of Democrats felt that way.) This poll also discovered that jobs and the economy ranked as the most important issue for voters when it comes to picking a president (28 percent), while terrorism placed second (15 percent).

In short, many Americans are wigged out about terrorism, particularly Republicans. But as the Times pointed out, since 9/11 jihadist terrorism in the United States has claimed the lives of 45 people, and 48 have been killed in terrorist attacks spurred by white supremacist or far-right extremist ideologies. Day-to-day gun violence—including non-ideological mass shootings—yields far more murders. So how can—and should—the terrorism threat be kept in perspective? After all, human beings are notoriously lousy at assessing modern-day risks (see here and here), as Psychology Today noted in 2008:

The human brain is exquisitely adapted to respond to risk—uncertainty about the outcome of actions. Faced with a precipice or a predator, the brain is biased to make certain decisions. Our biases reflect the choices that kept our ancestors alive. But we have yet to evolve similarly effective responses to statistics, media coverage, and fear-mongering politicians. For most of human existence, 24-hour news channels didn’t exist, so we don’t have cognitive shortcuts to deal with novel uncertainties.

Still, uncertainty unbalances us, pitching us into anxiety and producing an array of cognitive distortions…And though emotions are themselves critical to making rational decisions, they were designed for a world in which dangers took the form of predators, not pollutants. Our emotions push us to make snap judgments that once were sensible—but may not be anymore.

September 11 clearly indicated that there was a real threat from terrorism. A well-organized and funded outfit working far away, and with the protection of a host government, orchestrated a sophisticated plot that achieved a mass-casualty event within the United States. And 2,977 people were killed. This horror gave the nation’s leaders and citizens plenty of cause to fear what would happen if jihadist extremists figured out how to strike the United States with nuclear or biological weapons. The true concern on September 12 was not so much a repeat of the attack on the World Trade Center, but an even more dangerous and consequential assault on the United States—perhaps an attack that would threaten the existence of the nation or, at least, that of a major city.

Targeting Al Qaeda and other extremists to prevent such a possibility was, of course, an appropriate priority. And plenty of questions emerged: How much surveillance is necessary and tolerable? How much inconvenience is accepted? What are the best strategies for countering jihadist terrorism? (Would invading Iraq help? Or might it cause more problems?) The goal was clear: to thwart the effort to hit the United States in a similar or worse fashion. Yet there was a problem: How could anyone evaluate this endeavor? Sure, if there is no grand 9/11-ish attack today, that’s good. But how do we know one won’t come tomorrow? Still, it seemed realistic to expect the US government—its spies, soldiers, and cops—to block such plots, which require a degree of coordination and support that must transcend national borders.

But attacks such as those in Paris and San Bernardino don’t necessarily demand extensive coordination and a great deal of assistance, particularly in the United States. Here, a small number of suicidal extremists, perhaps just a husband and a wife, can always find high-powered weapons, acquire loads of ammo, storm into any soft target (a community center, a school, a movie theater), and kill many—and terrorize millions. How can the government—be it the president or a local mayor—stop this?

This year, law enforcement authorities have arrested almost 60 people in the United States for ISIS-related offenses. (That’s the largest number of annual terrorism-related arrests since September 2001.) So perhaps other San Bernadino-like or Paris-ish attacks have been averted. Nevertheless, no intensified vigilance will yield a 100 percent guarantee that a single self-radicalized extremist or a small cell working and communicating with no one else won’t enter a shopping mall and start mowing down people in the name of ISIS.

So what’s Obama to do? Actions he takes regarding the fight against ISIS in Iraq and Syria could have absolutely no impact on what happens within the United States. Air strikes and military operations could weaken ISIS in those two countries. He could accelerate these moves and bolster the US partnership with the Iraqi military and the Kurdish militias. He could successfully push other Arab nations to do more within the anti-ISIS fight. He could up his diplomatic game and bring Russia further into the effort to end the chaotic civil war in Syria that has created a rich breeding ground for ISIS. And all of this might work to contain, degrade, or destroy ISIS in that region. But it could have little effect on terrorism within the United States. Such steps could even motivate ISIS sympathizers in the United States to head to their local gun stores and arm themselves. It does not take much to terrorize a nation. We all know we are vulnerable, anywhere, at any time, to homegrown freelancers. And no doubt, an event like San Bernardino can lead some to fear that a nuclear or biological terrorism attack is a greater possibility.

Consequently, jittery Americans might never feel safe, and there’s not much Obama can say at this stage to convince them otherwise. (He probably should avoid pointing out that an American is more likely to die in an auto accident than in a terrorist incident, no matter how true that is.) And politicians who wish to exploit those jitters will have ample opportunity to score points. They can fulminate and thump their chests—venting for those Americans who are nervous and frightened and crave a greater sense of security. They can claim that they have the guts to use the words “radical Islam” and vow that they will somehow do more to win once and for all the so-called war on terrorism. They need not be specific. They need only make noise and perform—in order to contrast themselves with a president who is bound by difficult realities and bedeviling uncertainties. And here’s the kicker: The more Republican candidates cry out that a feckless and know-nothing Obama is making the nation susceptible to terrorism, the more they will stoke voters’ fears, and the more they can seek to take advantage of that.

Talking realistically about terrorism is no political winner for the president. And his former secretary of state, Hillary Clinton, the most likely potential Democratic heir, will have a hard time out-venting any of the Republican wannabes, who clearly see this moment as a chance for their party to erase the stain from the excesses of the Bush-Cheney administration and to regain its historic advantage on national security. In his Oval Office speech, Obama declared that “we will overcome” the threat of terrorism. He added, “Our success won’t depend on tough talk or abandoning our values or giving in to fear.” But the question is, where will the inevitable politics of tough talk and fear take the country?