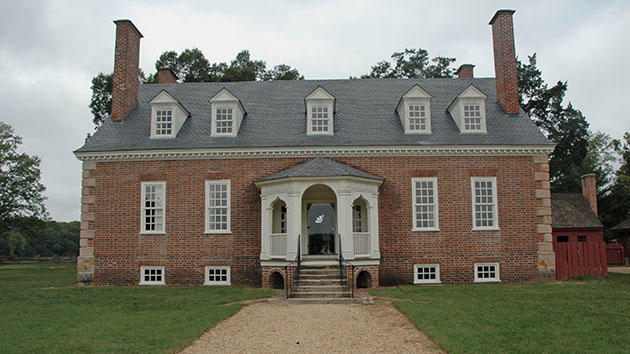 Residents of Virginia’s Fairfax County were given the opportunity to travel back in time this weekend to celebrate Christmas as it would have been on an 18th-century plantation—complete with actors portraying slaves.

Gunston Hall, a mansion built on a plantation for Founding Father George Mason in 1755 (and unaffiliated with George Mason University), is now a museum with a mission to “utilize fully the physical and scholarly resources of Gunston Hall to stimulate continuing public exploration of democratic ideals as first presented by George Mason in the 1776 Virginia Declaration of Rights.” It is also the site of “Plantation Christmas,” an annual simulation of what Christmas would have been like at Gunston Hall in the late 1700s.

“Join Gunston Hall in a celebration of the season!” the historical site’s web page reads. “Experience an 18th-century holiday as you sample food from the hearth kitchen, meet historic characters, and visit with Santa.”

For some people, of course, an 18th-century Christmas celebration would not have involved sampling foods from hearth kitchens or meeting historic characters (let alone Santa), but rather would have been just another day as a slave. So when David DuVal, the director of marketing and public relations for Gunston Hall and an alumnus of George Mason University, began guest-tweeting from the @GeorgeMasonU account, many voiced disapproval of the event, using the #PlantationChristmas hashtag. 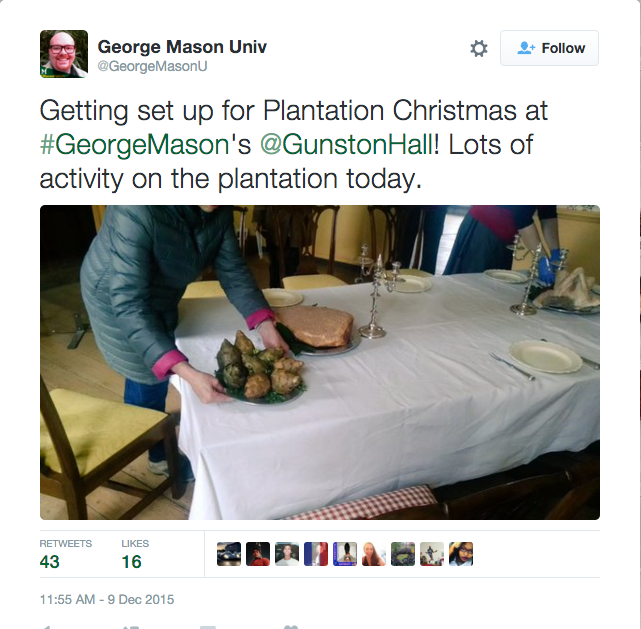 Celebrating slavery does not make you proud of your history, it makes you blatantly racist. #PlantationChristmas

I pay 20k to go to a school who still doesn’t recognize why #PlantationChristmas is problematic??????

Two prominent black activists, Kwame Rose and Brittany Packnett, were among those critical of the event on Twitter.

Scott Stroh, Gunston Hall’s executive director, told Mother Jones last week that while Gunston Hall appreciates the conversation that has been sparked on social-media networks, it is an educational institution that is staging an educational program—not a celebration.

“We’re doing quite a bit at Gunston Hall to learn about slavery and enslavement,” Stroh said. “What we’re trying to do is frame conversations, in which multiple perspectives can be brought together in a way that is informed by historical context but voiced by people today. We believe strongly that understanding the history around which many of these ideas were born is vital to our understanding of these topics today.”

Stroh said Saturday’s event was a simulation of activities that would have taken place in the 18th century across the country. “This event is an educational program,” he said. “In that context we explore 18th-century holiday traditions and the ones that would have been in place at Gunston Hall. We have been exploring the ways in which all of these communities would have been associated with these holidays.”

But Gunston Hall’s website does call Plantation Christmas a “celebration of the season.” And some elements of the event, such as a visit from Santa Claus, wouldn’t have taken place in the 18th century. (Stroh defended the inclusion of Santa Claus by stating that “there are stories about Gunston Hall that are important beyond the period that George Mason lived there,” and stressed that Santa Claus greeted guests in a different building on a different part of the plantation, to preserve historical accuracy as much as possible.)

Re-enactment events like these raise questions about what is and is not fair game. Undoubtedly, there would be outrage if someone staged a Christmas celebration with a South African apartheid or Nazi Germany theme. Yet Christmas celebrations set against a backdrop of America’s most violently racist period seem to be relatively common. Previous Plantation Christmas celebrations also featured actors playing slaves. (For more on what it’s like for a black actor to play a slave, see this Mother Jones interview with a woman who portrayed a domestic slave at Mount Vernon.)

I asked Stroh whether Gunston Hall’s event, even with any educational purposes it might have served, was perhaps not worth the offense it might have given to Fairfax’s black residents, who make up about 10 percent of Fairfax County, or black students at nearby George Mason University.

“Quite honestly, I would say that’s not a question for Gunston Hall or me to answer in isolation from other voices and opinions,” Stroh said. “One thing we tried hard to do is to move away from a presentational style of education, and embrace a more facilitative style of learning. To answer the question about where we draw the line, or what subjects or stories would not be best discussed, that’s not a decision I can make in isolation of other views and opinions. Because in that case, I would be projecting my views on something bigger than Gunston Hall.” Stroh could not confirm how many, if any, black historians, staff members, or volunteers were included in the planning of the Plantation Christmas event.

Gunston Hall does not share any official relationship with George Mason University, according to both Stroh and Julian Williams, the university’s vice president for compliance, diversity, and ethics. However, the university did reach out to DuVal to guest-tweet from its account. Williams told Mother Jones that the official position of the university was that Gunston Hall is completely unaffiliated with the school. The title of the event, he said, is “beyond unfortunate,” and he hoped Gunston would have considered changing the name, but it sparked “robust conversation.”

Correction: An earlier version of this piece used a photo of a plantation that, though referred to here as participatory in similar celebrations, was not Gunston Hall.