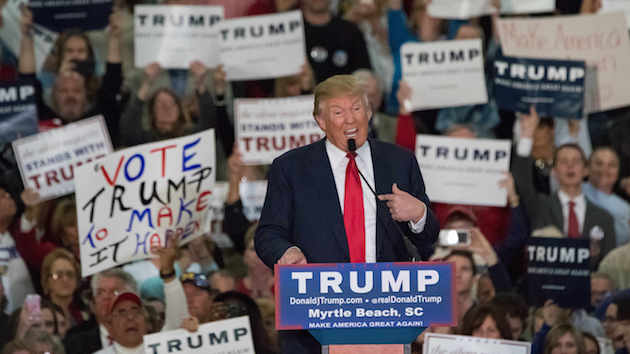 Last week—before Donald Trump schlonged Hillary Clinton and charitably pledged not to kill journalists—there was a curious episode involving the GOP front-runner and Russian President Vladimir Putin that remains, even after the passage of several news cycles, worthy of a few dollops of reflection, since it may provide a true key to understanding Trump.

It all began when the Russian strongman hailed Trump as “a very bright and talented man.” He also pointed out the obvious: that Trump was the leader in the GOP presidential race. Trump replied with a bear hug. On MSNBC’s Morning Joe, he proudly commented, “When people call you brilliant, it’s always good, especially when the person heads up Russia.” Though host Joe Scarborough pressed Trump, noting that several journalists critical of the Putin regime have been slain, the tycoon turned politician stuck with his admiration for Putin and replied, “He’s running his country, and at least he’s a leader, you know, unlike what we have in this country.”

Days later, Trump declined to distance himself from his Putin-friendly remarks. He insisted it would be good for the United States if he became president because Putin respected him. Trump also defended Putin, saying, “If he has killed reporters, I think that’s terrible. But this isn’t like somebody that’s stood with a gun and he’s, you know, taken the blame or he’s admitted that he’s killed. He’s always denied it.” (According to the Committee to Protect Journalists, “Russia remains the worst country in Europe and Central Asia region at prosecuting journalists’ killers…[In] nearly 90 percent of murders of journalists in Russia, no one is convicted.”)

Many Republicans and other human beings were astonished by Trump’s embrace of Putin. Mitt Romney was so enraged he put out a tweet. And I’m told that GOP insiders once again started telling each other that this Trump misstep—a candidate playing footsie with the repressive ruler of Russia!—would be the one to topple Trump’s tower-like standing in the polls. Well, perhaps. But, then again, Trump tends to not schlong himself.

Still, the episode left many members of the politerati puzzled: What could have prompted Trump to become a kissing Cossack of Putin? Though time has marched on, this question still warrants an answer. Or a theory. And I have one.

Trump is a narcissist—at least, several experts in narcissism have raised (quite strongly) this possibility. As Jeffrey Kluger, author of The Narcissist Next Door: Understanding the Monster in Your Family, in Your Office, in Your Bed—in Your World noted in Time, “To call Donald Trump a narcissist is, of course, to state the clinically obvious. There is the egotism of narcissism, the grandiosity of narcissism, the social obtuseness of narcissism.” And writing in the New York Times, Scott Lilienfeld, a psychology professor at Emory University, and Ashley Watts, a graduate student there, observed:

The political rise of Donald J. Trump has drawn attention to one personality trait in particular: narcissism. Although narcissism does not lend itself to a precise definition, most psychologists agree that it comprises self-centeredness, boastfulness, feelings of entitlement and a need for admiration.

They declared that it would be “inappropriate of us to offer a formal assessment of his level of narcissism.” But according to the Mayo Clinic, these are the symptoms of narcissistic personality disorder:

Yes, mental health specialists should not diagnose anyone from afar. But it would be hard to read this list and point to a public figure who exhibits more of these traits than Trump. In Psychology Today, journalist Randi Kreger, who has written on personality disorders, applies this list to Trump’s statements and actions and finds—guess what?—compelling evidence for each symptom. Some experts have been so sure of Trump’s narcissism that they have been willing to brand him with the N-word merely on the basis of his public life. As Vanity Fair reported recently:

For mental-health professionals, Donald Trump is at once easily diagnosed but slightly confounding. “Remarkably narcissistic,” said developmental psychologist Howard Gardner, a professor at Harvard Graduate School of Education. “Textbook narcissistic personality disorder,” echoed clinical psychologist Ben Michaelis. “He’s so classic that I’m archiving video clips of him to use in workshops because there’s no better example of his characteristics,” said clinical psychologist George Simon, who conducts lectures and seminars on manipulative behavior. “Otherwise, I would have had to hire actors and write vignettes. He’s like a dream come true.”

Let’s assume that Trump, if he’s not a full-blown case of narcissistic personality disorder, is narcissistic-ish. And then let’s ask: How does a narcissist judge other people in his super-self-centered world? Certainly, it’s all about how these other people relate to the narcissist. And for a narcissist, what’s most significant is how others think of him. So in the case of Putin, what counts for Trump is how Putin regards Trump. If Putin says Trump is brilliant, then Putin must be okay. Other parts of Putin’s record—say, invading a country or running a corrupt, repressive regime—don’t matter as much. After all, those things don’t affect Trump directly.

Trump seems to inhabit a world that he views as one big green room, full of bold-faced names, with Trump as king of the hill. At campaign speeches, he often refers to famous people—the famous people in his world—by their first names, inviting his followers and supporters into this exclusive, otherwise-gated community. (His campaign is like one long episode of Lifestyles of the Rich and Famous.) And Putin is just another inhabitant with the sense to recognize Trump’s undeniable greatness. During a Republican presidential debate in early November, Trump boasted of forging a bond with Putin during a taping of 60 Minutes. He made it sound as if he and Putin had buddied it up in the green room at CBS: “I got to know him very well because we were both on 60 Minutes, we were stablemates, and we did very well that night.” Trump the salesman was selling his connection with über-man Putin as a qualification for the presidency.

Well, it did not take fact-checkers long to report that Trump’s statement was a total lie. As Factchecking.org put it, “The two did appear on the same ’60 Minutes’ episode, which aired on Sept. 27. But journalist Charlie Rose traveled to Moscow for the two-hour interview with Putin, and Trump was interviewed by Scott Pelley in Trump’s Fifth Avenue penthouse in Manhattan.” In this instance, Trump’s big green room in the sky was a fantasy. Yet somehow, in Trump’s mind, his proximity to Putin via videotape elevated him to the level of a superpower leader. Clearly, Trump had a need to identify with Putin.

Trump’s full-on fib about getting to know Putin “very well” while both were being promoted by 60 Minutes did nothing to slow down Trump’s campaign. And it seems that the next time Trump had a chance to show everyone he was on Putin’s level—with Putin now identifying with Trump and endorsing his manifest brilliance—he seized it.

The Putin affair illustrates that Trump’s main currency is not money or power; it’s Trump-love. Putin showed it, and, for Trump, that defined the man. Putin, as far as Trump sees it, has passed the most critical test: He validated Trump’s magnificence. For a narcissist, what in the world could be more important?