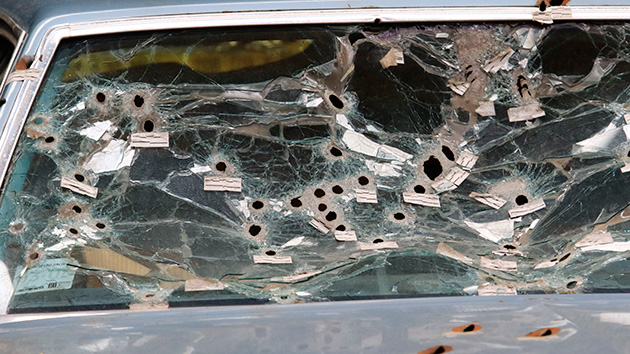 The windshield of the car driven by Timothy Russell on the night of November 29, 2012. Following a high-speed chase, Cleveland police officers fired 140 shots at Russell and his passenger, Malissa Williams.AP Photo/Aaron Josefczyk, Pool

Today, a federal judge threw out a yearlong case centering on a peculiar claim: When non-black cops shoot and kill black people in Cleveland, they face stiffer repercussions than black cops who kill black people. Nine police officers—eight white, one Latino—claimed that they were subjected to “reverse discrimination” and “mental anguish” after a controversial 2012 incident in which they killed two unarmed African Americans in a fusillade of nearly 140 bullets. The suit, filed just days after a Cleveland police officer shot and killed 12-year-old Tamir Rice, alleged that the officers were singled out due to their race and were unfairly punished while the state investigated the shooting. Their claim of victimization, ruled Judge James Gwin in response to the city’s request for summary judgment, was “illogic.”

The events behind the case occurred on the night of November 29, 2012. According to the Ohio Bureau of Investigation’s report on the incident, a plainclothes officer named John Jordan saw a black man and a black woman sitting in a parked car in East Cleveland. He suspected they were “involved in illegal drug activity,” so he called in the vehicle’s license plate. The dispatcher told him it was “clean,” but Jordan decided to search the vehicle anyway, he later admitted to investigators. When the car’s driver, 43-year-old Timothy Russell, drove away, Jordan followed and pulled him over for failing to use a turn signal. When the officer got out of his unmarked car, Russell took off.

In the space of 18 seconds, 13 cops fired nearly 140 rounds at the car. One officer jumped on the hood and shot through the windshield at least 15 times.

Another officer saw Russell’s car speeding by. As it passed, he heard a loud bang, which he later said sounded like a gunshot. He sped after the car and other police cars soon joined in pursuit. The chase lasted 25 minutes and at one point involved at least 62 police cars. All the while, the suspects’ car backfired intermittently. Some officers noticed this but did not radio this information to others.

The police finally cornered the car in a middle school parking lot. After shouting for Russell to stop the vehicle, an officer fired at both Russell and his passenger, 30-year-old Malissa Williams. In the space of 18 seconds, 13 cops fired nearly 140 rounds at the car. One officer, Michael Brelo, emptied the magazine of his Glock 17, reloaded, jumped onto the hood after everyone else stopped shooting, and shot through the windshield at least 15 times, firing a total of 49 rounds. Russell and Williams were each shot more than 20 times. Both were unarmed.

Public reaction to the shooting, which occurred more than a year and a half before a white police officer killed Mike Brown in Ferguson, Missouri, was muted. Russell and Williams’ deaths did not spark any mass protests, just a smattering of critical newspaper columns and a press conference from church leaders calling for justice.

Following the shooting, the 13 officers who had shot Russell and Williams were given three days of paid leave to “recuperate and adjust emotionally.” As required by the police department’s policy on officers who have used deadly force, they were then put on restricted duty and stationed in the police gymnasium for a 45-day “cooling off period.” They remained there for another year while the Ohio Bureau of Criminal Investigation looked into the shooting, a process that included gathering forensic evidence, interviewing more than 130 officers, reviewing dash-cam and surveillance videos, retrieving the officers’ text messages and phone records, and creating an animated reenactment of the shooting. 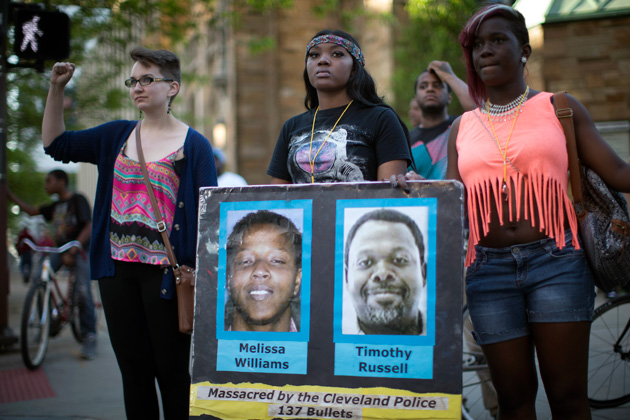 Protesters in Cleveland carry a sign with photos of Timothy Russell and Malissa Williams following the acquittal of Michael Brelo in May. AP Photo/John Minchillo

None of the 13 officers, including the nine plaintiffs, were fired or suspended. The Ohio Bureau of Investigation found that the shootings were the result of a “systemic failure in the Cleveland police department,” but it absolved the individual officers of wrongdoing. Brelo, who is not a plaintiff in the discrimination case, eventually faced voluntary-manslaughter charges and was acquitted in May, sparking protests. (The Cleveland police department did not respond to a question about whether he is still on the force.) His case prompted a Department of Justice investigation that found that the Cleveland police force “engages in a pattern or practice of the use of excessive force in violation of the Fourth Amendment.” In November 2014, the city reached a $3 million settlement with Russell’s and Williams’ families.

Despite having their records cleared, the officers sued the city, claiming that “boring” and “menial” work in the gym caused them not only financial harm (since they could not work overtime) but “permanent” emotional damage, including anxiety and a loss of self-esteem. Nonetheless, the officers said their complaint was not about the gym, but about how they had to work there longer than their black colleagues who had killed black suspects.

The data, which had not previously been publicly available, also shows a striking racial imbalance in the use of deadly force by Cleveland cops. While 53 percent of Cleveland’s population was black when Russell and Williams were killed, just 26 percent of its police officers were. Between 2007 and 2013, the city’s police killed at least 21 people, of whom 16, or three quarters, were black. Of the 32 cops who fatally shot black people (this includes the shooting of Russell and Williams and other cases in which multiple cops killed one person), 24 were white and 7 were black. And in the at least 18 instances in which police fatally shot unarmed black people, at least 15 involved white cops. (Black police, on the other hand, did not kill any white people, armed or unarmed.)

The cops’ discrimination claim was not unprecedented, but the judge’s dismissal of it was. In 2010, an all-white jury awarded Cleveland patrolman Edward Lentz nearly $300,000 for emotional distress in a federal discrimination case. Lentz had been assigned to the police gym while the city investigated an incident in 2000 where he jumped on top of a car and fired 14 bullets through the roof, killing the driver, an unarmed 12-year-old black boy. Lentz claimed that he was made into a scapegoat to appease the “considerable ongoing outcry in black communities regarding shootings by white police officers.”

Two previous cases had also made similar claims. In September 2005, two white Cleveland officers entered the house of 15-year-old Brandon McCloud at 5 a.m. to search for evidence related to a string of robberies. They found McCloud in a closet brandishing a steak knife and shot him 10 times. That same year, a white officer shot and killed an unarmed black man, Laray Renshaw, claiming he had reached for the officer’s gun. None of the three cops in these two cases were charged (though the officer later paid a $50,000 settlement to Renshaw’s family). But they all claimed they were victims of reverse discrimination by being placed on restricted duty in the gym. The city of Cleveland settled with them for a total of $450,000.

The officers partly blamed the media, which “began to sensationalize the events” by pointing out their race and the race of their victims.

The officers in the current case partly blamed their plight on the media, which, they stated in their complaint, immediately “began to sensationalize the events” by pointing out their race and the race of their victims. The media also allegedly wronged the officers by quoting community members who called the shootings “murder” and “executions” and demanded that the officers be punished. In their depositions and affidavits, the officers frequently suggested that investigations into shootings by white cops were driven by an outside agenda. Take the deposition of James Simone, a retired officer who was called in by the plaintiffs and who throughout his career shot 11 people, killing 5, the last of whom was an unarmed bank robber:

Q: Could you talk about your observations of the political influence that has occurred when a white officer shoots a black suspect?

A: Well, it’s obvious that the investigations from the very beginning are focused on satisfying the media and the people that are involved.

In a strange way, the judge just proved him wrong, writing that “a plaintiff must do more than merely point to race and proclaim: ‘Aha! Discrimination.'” By throwing out the officers’ case, he just made it harder for white police to shoot unarmed black people and claim they are the real victims.