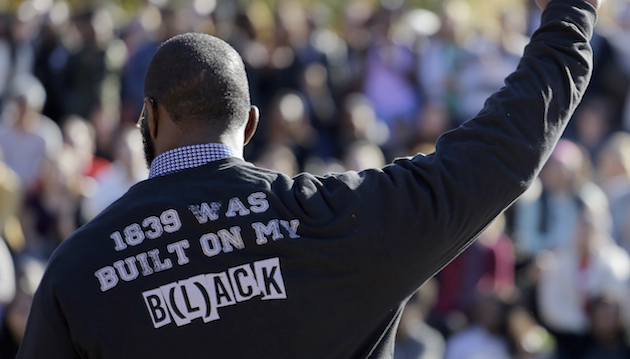 After a night of confusion and fear on the Columbia campus of the University of Missouri, police announced on Wednesday morning that they had arrested a suspect, Hunter M. Park, for “making a terrorist threat” against black students and faculty on the anonymous social media platform, Yik Yak:

.@MUPDpolice has released a statement about the arrest made concerning threats to the #MIzzou campus. pic.twitter.com/65MUwVA9FS

Mizzou threat suspect Hunter Michael Park, 19, is white, and he lists his home as Lake St. Louis, according to jail records.

Police said the person was not on or near university grounds when the threats were first published online.

The uptick in campus-wide concern came just a day after University System President Tim Wolfe and Chancellor R. Bowen Loftin announced they would step down amid pressure from students, a hunger strike, and a boycott from the Missouri football team in response to a flurry of racially charged incidents that have plagued the campus in recent weeks.

Shortly before 8 p.m. on Tuesday, a notice was sent out on the university alert system noting that authorities were “aware of social media threats” and that officials were beefing up security. At 10 p.m., MUPD announced the threats were under investigation. MUPD Maj. Brian Weimer told the Maneater, a student newspaper: “We’re aware of it and we’re looking and trying to identify who it is.”

The posts in question were widely shared on social media Tuesday night, and sparked panic on campus. “Some of you are alright,” one message read. “Don’t go to campus tomorrow.”

My heart is so heavy… this was posted on Yik Yak in Columbia tonight. Everyone, please get off campus. #Mizzou pic.twitter.com/2iETLH1DdX

While representatives from the university’s student government urged administrators to cancel classes on Wednesday “due to the nature of threats on campus,” an alert sent late Tuesday by the university cautioned against spreading rumors and added that there was “no immediate threat to campus.” University Provost Garnett Stokes told reporters a decision on class cancelation would be made in the early morning on Wednesday.

.@MSAmizzou has contacted admin asking for classes to be canceled tomorrow. pic.twitter.com/sWnLN2ljML

As of Wednesday morning, most classes were scheduled to take place as normal.

This isn’t the first time university police had to deal with threats on the anonymous social network. Last December, in the wake of student demonstrations over racial tensions on campus, commenters took to Yik Yak to post a flurry of racist and insensitive anonymous notes. One yak noted: “Lets burn down the black culture center & give them a taste of their own medicine.”