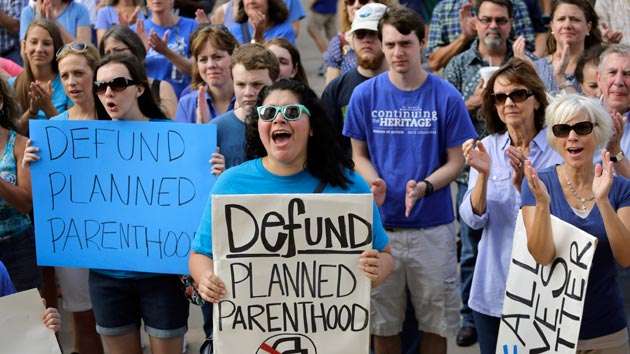 Anti-abortion activists rally on the steps of the Texas capitol in July 2015.Eric Gay/AP

Since this summer’s release of doctored sting videos targeting Planned Parenthood, Congress has been embroiled in a fiery debate over funding for the women’s health care provider. On Monday, the Supreme Court made clear that it wants nothing to do with this fight. The court declined to hear a case involving federal funds for Planned Parenthood and the organization’s privacy in the face of continued probes by anti-abortion activists.

The case, New Hampshire Right to Life v. Department of Health and Human Services, centered on a 2011 public records request filed by New Hampshire Right to Life, an anti-abortion group, with the US Department of Health and Human Services, asking for documents filed by Planned Parenthood when applying for federal funding. The women’s health provider had historically received federal funds for family planning services through New Hampshire’s state government. But in 2011, the state administration decided to stop accepting and distributing this federal money, concerned that it was being used to “subsidize abortions.”

To fill the gap in Planned Parenthood’s funding, HHS decided to provide funds to the group directly for 16 months. It required the group to file documentation about its internal policies—including its medical standards manual and its fee schedule—in order to receive the funds, which Planned Parenthood did.

New Hampshire Right to Life filed its request to HHS under the Freedom of Information Act, asking for access to these Planned Parenthood filings and to internal HHS memos tied to the department’s decision to provide the reproductive health provider with a federal grant. When HHS refused, New Hampshire Right to Life sued the agency for the documents. HHS ultimately turned over about 2,500 pages of internal agency records. But it withheld most of the Planned Parenthood filings and some internal documents, primarily citing FOIA’s Exemption 4, a portion of the law that exempts certain types of commercial information filed by private groups from disclosure.

A federal district court and circuit court both upheld HHS’ refusal. Now that the Supreme Court has refused to wade into the disclosure debate, it’s cemented that refusal as final.

Attorneys for New Hampshire Right to Life painted the court’s decision not to hear the case as another example of government favoritism in the ongoing battle over public funds for Planned Parenthood. “We had hoped the US Supreme Court would consider this case,” said attorney Michael Tierney in a statement, “which would have addressed whether the government can continue to veil its support for Planned Parenthood.”