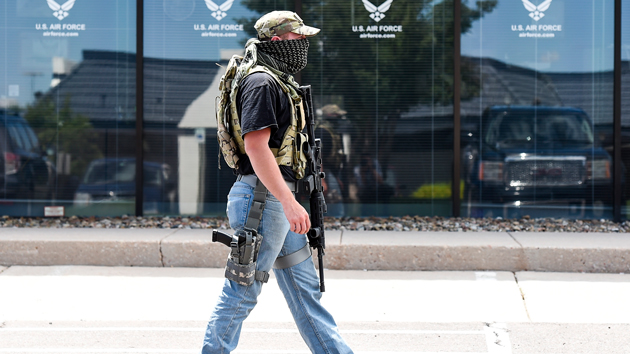 It wasn’t a matter of if, but when it would happen. On Saturday in Colorado Springs, a man exercising his right under state law to openly carry a rifle in the streets went on a rampage, killing three people before police took him out in a hail of bullets. Just before the attack, an alarmed neighbor saw the man walking around armed and dialed 911. The dispatcher explained to her that it was legal to carry a gun in public. Her 911 call wasn’t deemed urgent—the police did not process it as “the highest priority call for service,” a Colorado Springs PD official confirmed to Mother Jones yesterday. She soon dialed 911 again, after the killing had begun.

Exactly when and how the two 911 calls played out remains unclear: The Colorado Springs PD has so far denied open records requests and refused to provide any further information about the calls, citing an ongoing investigation into the rampage. [Update, Nov. 5: Audio of the calls has been released, listen here.] The 911 caller, Naomi Bettis, spoke further to local news outlet The Gazette late Tuesday:

“I didn’t like the first dispatcher,” Bettis said. “Because she says ‘You know in Colorado, they do have an open/concealed weapon law.'” Bettis said the time between her 911 calls was “not very long, but it seemed like forever.”

The Gazette also interviewed several Colorado police chiefs about how the state’s open-carry law affects their mission to protect public safety. Their responses were sobering:

Police chiefs contacted by The Gazette declined to comment specifically on Saturday’s shooting spree, because it remains under investigation. But they said calls related to weapons being carried openly are steeped in nuance — often leaving dispatchers and officers in a difficult spot.

“The problem that we all face is that we never have all the information,” said Fountain Police Department Chief Chris Heberer.

Evans Police Department Chief Rich Brandt, who also serves as president of the Colorado Association of Chiefs of Police, said he was unaware of a uniform system for handling those calls, such as where to prioritize them against the myriad other 911 calls received daily.

Heberer said 911 call takers generally try to gauge callers’ level of panic, and whether or not someone openly carrying a gun appears out of place.

Dispatchers’ challenges are similar to those of officers on the street, who have increasingly met people carrying guns — both openly and concealed.

Heberer stressed the need to respect gun holders’ constitutional right to have guns, and their ability to carry them in public. And he said officers must approach calls more carefully as a result.

“Situational awareness is that much more important,” Heberer said.

Despite long-running efforts by the National Rifle Association and other lobbying groups to persuade Americans otherwise, there is clear empirical evidence with mass shootings that armed civilians don’t stop bad guys with guns. The question now is whether the looser gun laws pushed by the NRA and others also prevent the police from doing so.