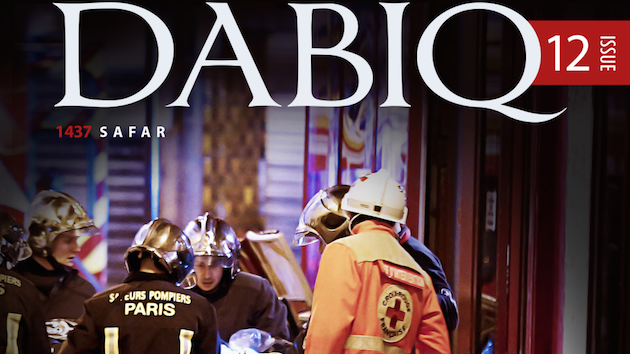 Since the end of October, ISIS has claimed responsibility for the murders of almost 400 people in strikes against France, Russia, and Lebanon. As officials continue to investigate how these attacks were carried out, the so-called Islamic State released its own version Wednesday morning—in the latest issue of its digital magazine, Dabiq.

As Mother Jones has reported before, Dabiq is a recruitment tool for ISIS, which uses the publication to deliver “informative” updates from its territory and articulate lengthy religious arguments that the group says justify its brutal tactics. ISIS’s propaganda arm, which began publishing Dabiq after the group’s declaration last summer that it had established a caliphate, uploads the magazine online as an English-language PDF and distributes it on social media. (Dabiq takes its name from a farming town in northern Syria, where, according to Islamic prophecy, the caliphate will defeat the forces of “Rome,” ushering in a series of events that will lead to the apocalypse—a story that is crucial to ISIS’s recruiting tactics.)

Here’s what the terrorist group had to say about recent attacks:

Paris
Dabiq doesn’t add much to what we already know about the simultaneous attacks that killed 129 people Friday at the Bataclan Theatre, Stade de France, and other locations around the Boulevard Voltaire in Paris. As European authorities mount raids looking for anyone who might have been involved in the plot, the magazine states that a total of eight people were involved in carrying out the attacks.

A year earlier, on “19 September 2014,” France haughtily began executing airstrikes against the Khil?fah [Caliphate]. Like Russia, it was blinded by hubris, thinking that its geographical distance from the lands of the Khil?fah would protect it from the justice of the muj?hid?n. It also did not grasp that its mockery of the Messenger would not be left unavenged. Thus, the Islamic State dispatched its brave knights to wage war in the homelands of the wicked crusaders, leaving Paris and its residents “shocked and awed.” The eight knights brought Paris down on its knees, after years of French conceit in the face of Islam.

The alleged mastermind of the Paris attacks, 27-year-old Abdelhamid Abaaoud, gave an interview to Dabiq earlier this year. In it, Abaaoud brags about being pursued by Western intelligence agencies and describes traveling between Syria and Belgium, where he claimed he was leading a terror cell that was broken up by Belgian officials.

Metrojet Flight 9268 crash
In a foreword to the issue, Dabiq‘s unnamed creators published an image of the bomb they say was used to bring down Metrojet Flight 9268, the Russian airliner that crashed on October 31 over Sinai, Egypt, killing all 224 passengers. The photograph shows a can of Shwepps Gold, alongside what appears to be a switch and detonator for the device.

New York Times reporter C.J. Chivers weighed in on the bomb on Twitter:

According to Dabiq, ISIS originally planned to attack an airplane belonging to the US-led coalition against ISIS, but switched its target to a Russian flight. An Egyptian branch of ISIS has previously claimed responsibility for the attack.

Neither the photograph nor any of the group’s claims about the attacks have been verified. Alexander V. Bortnikov, the head of the Russian Federal Security Service, said Monday that Russian investigators had determined that the plane was brought down in an act of terrorism, using an “improvised explosive device” that contained up to one kilogram, or 2.2 pounds, of TNT.

Dabiq explains how the attack on Metrojet Flight 9268 came about:

On “30 September 2015″…Russia decided to participate directly with its own air force in the war. It was a rash decision of arrogance from Russia, as if it held that its wars against the Muslims of al-Qawq?z were not enough offence. And so after having discovered a way to compromise the security at the Sharm el-Sheikh International Airport and resolving to bring down a plane belonging to a nation in the American-led Western coalition against the Islamic State, the target was changed to a Russian plane. A bomb was smuggled onto the airplane, leading to the deaths of 219 Russians and 5 other crusaders only a month after Russia’s thoughtless decision…This was to show the Russians and whoever allies with them that they will have no safety in the lands and airspace of the Muslims, that their daily killing of dozens in Sh?m through their airstrikes will only bring them calamities, and that just as they kill, they will be killed, by Allah’s permission.

Beirut, Lebanon
Dabiq also includes the November 12 suicide bombings in Beirut among a larger list of its recent “military operations”:

The soldiers of the Khil?fah in Lebanon parked a motorbike rigged with explosives on al-Husayniyyah Street in the region of Burj al-Bar?jinah located in the southern suburb of Beirut, a Hizbul-L?t stronghold, and detonated it on a gathering of R?fid? mushrik?n. When the murtadd?n subsequently gathered at the site of explosion, one of the soldiers of the Khil?fah detonated his explosive belt in their midst. The operation succeeded in killing more than 40 R?fidah and wounding over 200 more, and sent a clear message to the R?fid? allies of Bashar in Lebanon that they are well within the vengeful reach of the Islamic State.

According to CNN, Lebanese investigators apprehended a would-be suicide bomber who survived the attacks, and who claimed to have traveled to Beirut from Syria as part of an ISIS cell.