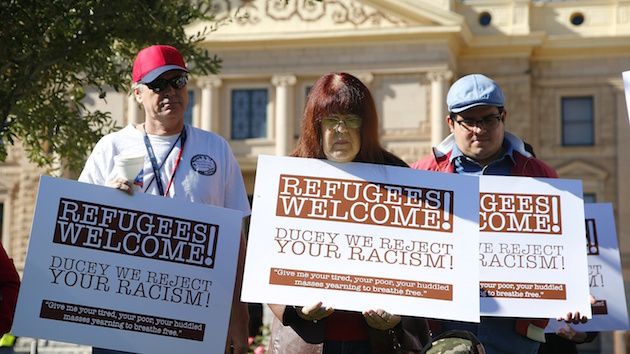 With a growing group of governors and members of Congress demanding a halt to the acceptance of Syrian refugees in the wake of the Paris attacks, refugee resettlement groups and the Obama administration are pushing back strongly against accusations that the vetting process for Syrian refugees is too lax.

Those demanding the United States keep out Syrian refugees maintain that ISIS may use the refugee crisis as a “Trojan horse,” as Donald Trump put it, to sneak terrorists into Western countries. Such fears were stoked by reports that the passport of a recently arrived Syrian refugee was found at the scene of a suicide bombing at the Stade de France in Paris. French authorities, though, say that document was forged.

But the refugee crisis in Europe is far different from the situation facing the United States. Thousands of refugees are entering Europe each day, and the UN refugee agency and individual governments are struggling to register, track, and care for them. But the United States has admitted fewer than 2,200 Syrians in the four years since the civil war there began, and the process of gaining permission to come to the US can take up to three years, say aid groups. In September, President Barack Obama pledged to accept at least 10,000 Syrians over the next year.

“Those who come to the United States have gone through a very thorough vetting process…with various departments of the government—the FBI, the National Counterterrorism Center,” says Matthew Soerens, an official at World Relief, one of the nine organizations that help the government resettle refugees in the US. “So these are not just random people showing up who we don’t know who they are.”

Senior Obama administration officials held a conference call with reporters on Tuesday morning to detail the vetting procedures for refugees and to counter what one referred to as “a lot of false information” about the resettlement program. “All refugees of all nationalities considered for admission to the United States undergo intensive security screening, and this involves multiple federal intelligence, security, and law enforcement agencies,” the official said. “The safeguards that are used include…fingerprint and biographic checks, and a lengthy in-person overseas interview.”

Another official on the call said the US government has added another layer of screenings specifically for Syrians called the “Syria Enhanced Review.” That program essentially prescreens and researches a refugee’s application, creating a dossier that US officials can then use to more precisely question refugees during their security interviews.

“If somebody says, ‘I was at a demonstration in Aleppo and the soldiers came and the police came and something happened,’ we can actually look back and see, was that consistent with known country conditions at that time and that place? And we can follow up with lines of questioning that would be appropriate,” the second official said.

The entire process can take from 18 months to three years. Lavinia Limón, the president of the US Committee for Refugees and Immigrants and a former head of the Department of Health and Human Services’ Office of Refugee Resettlement, said security checks on refugees continue throughout this time period. And making it through all of the security steps may not guarantee that a Syrian can actually come to the United States. “There’s no right to come into the United States, so even if somebody passes all the security checks, if the [security officer] just doesn’t like the guy, doesn’t feel good about it, the officer can say no,” Limón says.

In their call with reporters, the Obama administration officials noted that governors cannot actually bar refugees from their states, as many have announced they would attempt to do. “Refugees arriving in the US are protected by the Constitution and federal law,” the first administration official said. “He or she is also free to move anywhere in the country.”

But that doesn’t mean governors are completely powerless to make the lives of Syrian refugees more difficult. The nine nonprofit groups that help resettle refugees depend on a mixture of state, federal, and private funds and donations to help support newly arrived refugees. Governors could direct state refugee agencies to stop providing funds and assistance to Syrians. That could include services such as trauma counseling or English classes—assistance that might not be necessary for survival but that does help refugees successfully integrate into the community. “Those are critical resources,” says Soerens of World Relief.

Both he and Limón made it clear that the resettlement agencies won’t allow pressure from the governors to alter their plans to resettle refugees. “We actually have Syrian refugees landing in some of those states today,” Limón says. “I find it sort of amazing that these governors would be so undermining of our freedoms. Because it’s Syrian refugees today; who is it tomorrow?”