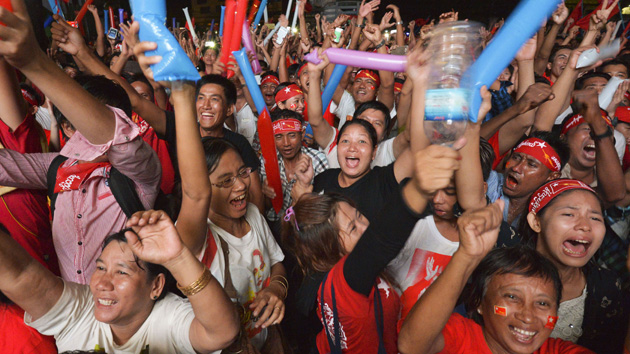 Supporters for Aung San Suu Kyi's National League for Democracy on Monday, in front of the NLD headquarters in Rangoon.Kyodo/AP

Five years to the day after a military junta released her from political house arrest, Nobel Peace Prize laureate Aung San Suu Kyi achieved a long-awaited victory: Her party, the National League for Democracy (NLD), triumphed on Friday in the Southeast Asian country’s first credible parliamentary elections in a generation, held last weekend—securing enough seats to form a government and select the next president.

President Barack Obama personally called Suu Kyi on Wednesday night, US time, to commend “her tireless efforts and sacrifice over so many years to promote a more inclusive, peaceful and democratic Burma,” according to the White House.

An NLD government would be the first in Burma (also known as Myanmar) in more than half a century that hasn’t been chosen exclusively by the military leadership—and it would mark a significant milestone for Burmese hoping for change. From 1962 to 2011, military dictators ruled the country with an iron fist, throwing political activists in prison, waging civil wars against ethnic minorities, and isolating the country from the international community, which imposed sanctions on the regime for human rights abuses.

But four years ago, relations with the West began to thaw when the junta handed power to a quasi-civilian government, led by former regime leaders. In exchange for an easing of sanctions, the military rulers released political prisoners and signed fragile ceasefire deals with some ethnic rebel groups.

“Right now, many people in the country cannot go to school or find a job,” said one NLD supporter.

For residents of Burma’s poorer rural areas, however, there were few improvements. “Right now, many people in the country cannot go to school or find a job,” says 29-year-old Zay Yar Hlaing, an NLD supporter in Rangoon, the former capital. Once considered an intellectual hub and the rice bowl of Southeast Asia, Burma became the region’s least developed country during military rule, he says, adding, “The NLD will change that.”

It’s not yet clear precisely how much of a majority the NLD will take in parliament. Burma’s election commission is still gradually releasing poll results, but as of Friday afternoon local time, the pro-democracy party had won at least 348 seats across the upper and lower houses of parliament, more than enough to clinch an absolute majority—giving the party the ability to appoint a new president.

But serious impediments remain, including a constitution written by Burma’s former rulers and passed in 2008 to safeguard their authority, regardless of election results. It reserves a quarter of the seats in parliament for unelected military representatives, and it gives them de facto veto power over constitutional amendments.

The constitution also makes Suu Kyi, the country’s most popular politician, ineligible for the presidency because her two sons hold foreign citizenship. And in a state of emergency, a military-led body can assume sweeping powers. As a result, Suu Kyi says she will lead the government in a position “above the president,” presumably via a proxy that she appoints—but how that will work remains unclear.

Leaders of the military-backed ruling party have congratulated Suu Kyi, pledging to respect the vote, and that’s a big deal: The last time the NLD participated in an election, in 1990, it also won by a landslide, but the results were annulled by the regime, and many of the party’s candidates were imprisoned.

The Obama administration may view the NLD’s victory as a win for the so-called US “pivot” to Asia—meaning a democratizing Burma could help counterbalance China’s influence in the region. Last month, Ben Rhodes, a US deputy national security adviser, said a credible election would be an important factor in America’s decision about whether to fully normalize relations with Burma, including by lifting remaining sanctions.

Burma still has a long way to go before it can be called a democracy.

But Burma still has a long way to go before it can be called a democracy. In addition to dealing with the military bloc in parliament, Suu Kyi will have to contend with ongoing civil wars and discrimination against Rohingya Muslims—her silence on which has led to criticism from human rights advocates.

That hasn’t stopped the euphoria among Burma’s democracy supporters. After voting ended Sunday, up to 10,000 people flooded the street outside NLD headquarters in Rangoon to celebrate. Dressed in red, the party’s color, and waving party flags, they cheered as preliminary results went up on a big screen. Many returned again the next afternoon, singing catchy NLD songs with lyrics like “the dictatorship will have to end totally,” even as heavy rain began to fall.

“This is our real independence day,” said Dr. June, a Rangoon resident who goes by one name. (Burma’s achieved independence from Britain in 1948.) “We have been released from dictatorship at last,” she said, before cautiously acknowledging that the military isn’t going away anytime soon.

“We are happy now, but they are still here.”