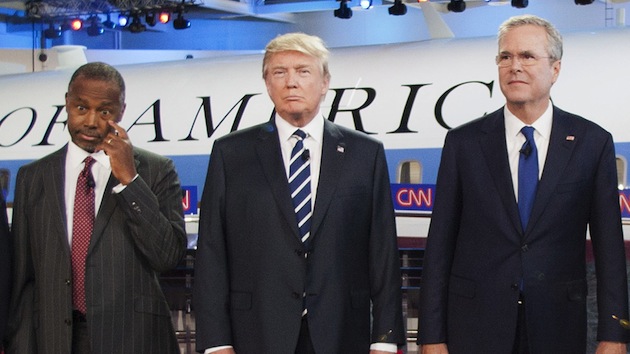 Ben Carson and Jeb Bush raised the most cash last quarter but are spending it fast. Donald Trump is largely self-funding his campaign.Armando Arorizo/Prensa Internacional/ZUMA

When the presidential candidates reported their third-quarter fundraising totals this week, the number to watch wasn’t the size of their hauls but their overall burn rate—how quickly they were spending the cash they raised. The quarterly filings revealed some campaigns that were living within their means and building war chests for the long slog to come, and others that will be lucky to sputter into the early primaries.

On the Democratic side, both Bernie Sanders and Hillary Clinton raised an extraordinary amount of money—$26.2 million and $29.1 million, respectively—and they each ended the third quarter of 2015 with more money in the bank than they started with. That’s something that many of their Republican rivals candidates can’t say.

The way each campaign spends its money speaks volumes about how the operation is run and how long it can afford to keep going. Sanders spent less than half the money he raised between July 1 and September 30, just $11.2 million. He ended the month of September with more than $27.1 million in the bank. If Sanders doesn’t raise another dime, he could continue his campaign at its current pace for more than seven months.

Clinton outraised Sanders, but she also outspent him. While Clinton’s campaign ended September with a formidable war chest of $32.9 million, her burn rate could be problematic. Clinton spent $25.7 million over the last three months, or a little over $8.5 million a month. That means Clinton must maintain her campaign’s furious pace of fundraising or face the prospect of digging into her reserves.

But the Clinton and Sanders campaigns are in stellar shape compared with the finances of some of the GOP candidates, who are spending money faster than they are raising it. The lesson in how quickly a campaign can dry up was demonstrated by Wisconsin Gov. Scott Walker. The third-quarter filing period was the first and last time Walker had to report his fundraising: He joined the race after the last reporting deadline and dropped out in September. In the barely two months Walker was in the race, he raised $7.3 million, the third most of any Republican. But his campaign still shut down owing $161,000.

Leading the Republican side in fundraising for the third quarter was Ben Carson, the only GOP candidate to crack eight figures, with $20.7 million. But the Carson campaign’s fundraising method, reliant on direct mail, comes with a hefty price tag. The campaign spent $8.4 million, or nearly 60 percent of the total $14.2 million it spent in the third quarter, on fundraising costs, such as fees for postage, phone calls, and consultants.

Jeb Bush’s campaign trailed Carson’s in fundraising, pulling in $13.3 million and spending nearly all of it—$11.4 million. Bush’s spending habits don’t show a candidate who seems particularly worried about the bottom line, at least not yet. According to its disclosures, his campaign spent $1.2 million on airfare, with private jet charters accounting for at least $922,000. The Bush campaign’s accounting costs alone ran $46,000 over the last three months. Bush has the luxury of support from the best-financed super-PAC, Right to Rise, which reported raising $103 million in the first half of the year. It won’t report any additional fundraising until January.

Ted Cruz, who is backed by several well-funded super-PACs, might have had the best fundraising quarter of the major GOP candidates, raising $12.2 million and spending just more than half of it ($6.9 million), filling his coffers for a long run. His take wasn’t nearly as big as Carson’s or Bush’s, but Cruz actually ended the month of September with more cash on hand than any other GOP candidate—$13.7 million. That’s enough for Cruz to continue for at least another six months at his current pace, even if he stops fundraising today.

Rand Paul’s finances reflect a campaign that’s living on borrowed time. Paul, who recently toured Iowa (by car, after missing his commercial airline flight), live-streaming as he went, raised just $2.5 million in the last three months. His campaign spent $4.5 million during that period, leaving him with a dwindling pile of cash that won’t cover another three months of campaigning if he doesn’t boost his fundraising. But Paul’s financial picture is not as bleak as it could be. When his numbers were first reported last week, his campaign spokesman insisted that fundraising picked up since the second GOP debate, at which Paul appeared more assertive. That, it turns out, is true. Paul raised at least $526,000 in the two weeks after the debate, accounting for more than 20 percent of his total fundraising for the third quarter.

Louisiana Gov. Bobby Jindal also spent far more than he raised in the third quarter. Like Paul, he won’t be able to make it through another three months at his current rate of raising and spending. Unlike Paul, he didn’t see a post-debate surge. Sen. Lindsay Graham of South Carolina raised barely $1 million and spent nearly $2 million, leaving him with only $1.6 million left in the bank—probably not enough to help him get through the next three months if he doesn’t have a fundraising surge soon.

Mike Huckabee, who’s trailing in the polls, seems to have a handle on his burn rate. Huckabee reported spending more than he raised, but just slightly. His campaign spent $1.3 million and brought in $1.2 million, and it has more than $761,000 in the bank. If the campaign keeps up its current level of modest spending and raising, it can coast on for a while.

Of course, the campaigns of the presidential contenders, particularly on the Republican side, have another source of backing that complicates the financial picture: super-PACs that can raise and spend unlimited amounts and are barred from directly coordinating with the campaigns they promote.

Marco Rubio and Carly Fiorina are running campaigns that are specifically designed to make use of outside groups. Fiorina’s campaign is a bare-bones outfit, with nearly all of her on-the-ground operations carried out by a super-PAC. Fiorina’s campaign itself did have a strong fundraising quarter, raising $6.7 million, a dramatic increase from the previous three months. But this hardly shows a clear picture of her team’s financial strength. Carly for America, the super-PAC backing Fiorina, won’t report its fundraising totals again until January.

Rubio raised less money in the third quarter than in the second, but his campaign is also largely driven by outside groups. The New York Times reported recently that at least $5.5 million worth of pro-Rubio ads have been bankrolled by a dark-money group backing his campaign. Rubio also appears to be leading his rivals in what you might call the “billionaire primary,” attracting interest from some of the GOP’s wealthiest political benefactors, including casino magnate Sheldon Adelson.

The wild card—and not just on the financial side—is Donald Trump. His campaign’s meticulously detailed filings, which list the particular credit card that was used for each expenditure, show that he raised $3.9 million, including $2.7 million from small donors who gave less than $200. But his flashy campaign spent $4.1 million, leaving it with just $254,000 in the bank. The billionaire real estate and reality TV mogul doesn’t have the same financial constraints as his opponents, however. Trump has vowed to dump $1 billion of his fortune into the race, which means he can afford to remain in the campaign to troll his rivals indefinitely.