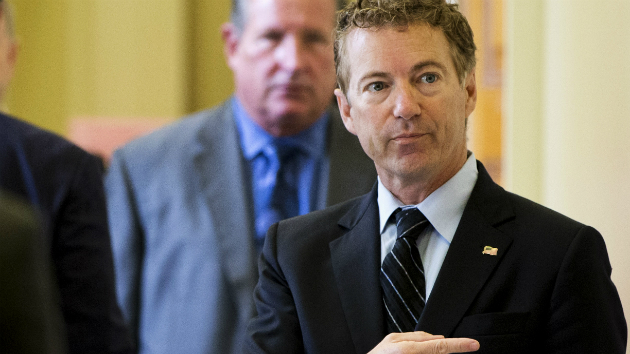 In 2008 and 2012, Ron Paul became famous for his “money bombs”—internet-fueled fundraising frenzies during which his rabid followers poured millions of dollars into his campaign coffers. But his son’s presidential campaign may be best remembered for a money bomb of another sort. Rand Paul’s campaign confirmed on Thursday that it had raised just $2.5 million over the past three months. To put that in perspective, his dad’s campaign once raised $6 million in one day.

The news comes at a particularly awkward moment for Paul. Earlier this week, Donald Trump taunted the Kentucky senator online, predicting on Twitter that he would be the next GOP hopeful to drop out of the race. Paul laughed off the taunt, calling Trump a clown, but his campaign’s lackluster fundraising is difficult to spin.

Sergio Gor, Paul’s spokesman, said the fundraising situation had actually improved since the most recent GOP debate on September 16. “A key takeaway is that we raised $750,000 in just the last two weeks,” Gor said. “With $2 million cash on hand, our campaign is in for the long haul.”

The cash on hand is not a small thing. Wisconsin Gov. Scott Walker dropped out of the race last month after his campaign came close to going broke and campaign contractors began complaining they hadn’t been paid. Still, an analysis of the campaign’s expenditures suggests that if Paul’s 2016 campaign doesn’t pick up the pace of its fundraising, it could find itself in a similar position.

Without substantially improving fundraising numbers, the campaign may run out of cash well before the end of the next quarter.

The low numbers come on the heels of other bad fundraising news for Paul. On Tuesday, the head of a libertarian-themed super-PAC that had previously thrown its support behind Paul announced that the group had decided to stop, at least temporarily, spending or raising money on the candidate’s behalf. Another super-PAC, endorsed by Paul explicitly, took a blow in August when two of its organizers were indicted on campaign finance charges stemming from their work on Ron Paul’s 2012 campaign.

One bright spot for the 2016 Paul presidential campaign is that a third super-PAC, Concerned American Voters, is footing the bill for a staff of field canvassers on the job in Iowa. Still, if Paul’s fundraising doesn’t improve, and fast, Trump’s prediction might prove right.