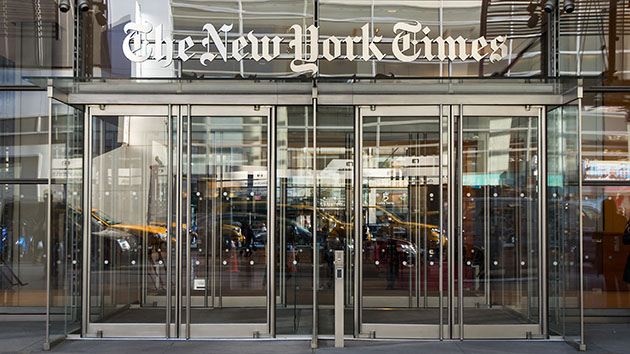 Following the Democratic presidential debate last week, Alan Rappeport of the New York Times published a roundup of the analyses of 11 political experts—bloggers, radio hosts, pollsters. Twitter users quickly pounced on a problem with the roundup: All 11 experts were white men.

Criticism of the roundup’s lack of diversity led the Times‘ public editor, Margaret Sullivan, to publish a response for which she solicited comment from the paper’s chief politics editor, Carolyn Ryan. Ryan claimed that Rappeport was unaware of the ethnicities of the men in the roundup, but acknowledged that the exclusion of more diverse voices was unacceptable. Ryan offered an unusual solution to the problem.

“We are going to do it again for subsequent debates and Alan will gather diverse voices,” Ryan wrote. “And, as one suggestion, I would like to invite any bloggers, political analysts, and thinkers who do post-debate analysis and are interested in being included in the roundup to email Alan at alan.rappeport@nytimes.com on the next debate day—Oct. 28.”

Two days after Sullivan published Ryan’s take, The Huffington Post ran a piece criticizing Ryan’s comment, under the headline “NYT Can’t Find Minorities To Comment On Politics, Asks Them To Write In.” Indeed, it seems a stretch to claim that a media organization like the New York Times would be capable of including diverse voices in its coverage of a major event only by resorting to crowdsourcing.

Ryan’s explanation also left unclear the logistics of community write-in debate coverage: In Sullivan’s post, Ryan said Rappeport would “gather diverse voices” but did not specify how his approach would specifically change or how he would screen emails to ensure a diversity of voices. Reached by email, Ryan responded, “He will be scanning Twitter, blogs, websites, magazine sites, and, perhaps, television, to gather opinions. He will be gathering quotes with several goals in mind. One is that he reflect a range of diverse voices. Another is that he gather commentary about a number of candidates, not just one.”

Rappeport would be looking for “considered analysis,” she continued, and not merely cheerleading for candidates or, worse, “mean-spirited remarks.”

But how would scanning various media sources, something that Rappeport is presumably already doing, ensure that diverse voices would be included in his roundup? Would he assemble a separate pile of email submissions from women and people of color?

“He won’t be making piles of responses,” Ryan wrote. “He will make sure to gather a range of diverse voices, by doing quick bio searches on Google, Twitter searches, etc., on those he is quoting. Sometimes, for example, the gender of a writer is obvious, other times it is not. And as the editor, I will certainly make sure that a diverse range of voices is included.”

The next primary debate, on the Republican side, will take place on October 28. Only then will we know if Ryan and Rappeport’s strategy to include new voices will work.