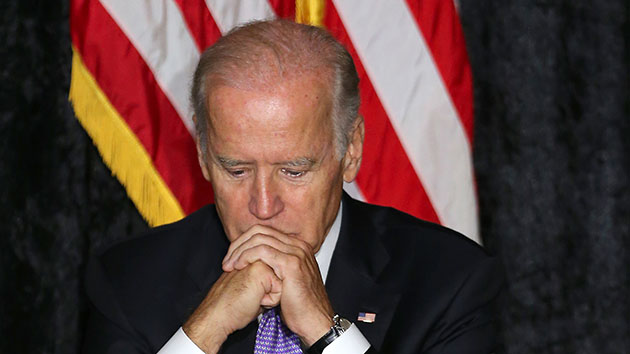 As Democrats fret about Hillary Clinton’s electoral prospects, Vice President Joe Biden has emerged as a viable alternative and steadily risen in the polls. Unlike the outright socialist Bernie Sanders, Biden and Clinton have largely fallen into the Democratic consensus on policy issues over their decades in politics. (Their one noted area of divergence, on how aggressive America’s foreign policy should be, has not been a dominant topic so far in the presidential election.)

But there’s one domestic issue on which Biden has occasionally strayed from the Democratic mainstream during his more than 40 years in politics. Biden has been an inconsistent supporter of reproductive rights, sometimes backing the legal right of women to choose how to handle a pregnancy, while often hewing to his Catholic faith and moralizing against all abortions. Even today, when he and Clinton would most likely agree on most of the policy substance of ensuring access to abortion clinics, Biden sticks to a pro-life view in his personal politics.

During the early part of his career, abortion rights groups griped about Biden as an unreliable ally. “Joe Biden moans a lot and then usually votes against us,” a Planned Parenthood official said in 1986.

When he first entered national politics, Biden was willing to stand alongside politicians who wanted to make abortion illegal. In a Washingtonian profile published the year after the Supreme Court’s 1973 Roe v. Wade decision established a nationwide right to abortion, Biden unequivocally criticized the ruling. “I don’t like the Supreme Court decision on abortion,” he said. “I think it went too far. I don’t think that a woman has the sole right to say what should happen to her body.”

He put that view into practice in 1982, voting in the Judiciary Committee for a proposed constitutional amendment that would have overturned Roe v. Wade by declaring that the Constitution offered women no inherent right to abortion, and that the federal government and states would be free to regulate or ban abortion as they pleased. Under that amendment, state laws that restricted abortions would have superseded more permissive federal laws.

But Biden moderated his anti-abortion stance over the years. “I was 29 years old when I came to the US Senate, and I have learned a lot,” he said in 2007. “Look, I’m a practicing Catholic, and it is the biggest dilemma for me in terms of comporting my religious and cultural views with my political responsibility.”

By the mid-1980s, Biden had become a somewhat more reliable defender of reproductive rights, at least as a constitutional matter. In his role as chair of the Senate Judiciary Committee, Biden pointedly questioned conservative Supreme Court nominee Robert Bork’s opposition to the majority decision on Griswald v. Conneticut, a ruling that struck down bans on birth control. Biden has since regularly boasted of his efforts to derail Bork. “Had he been on the court,” Biden said in his 2008 vice presidential debate with Sarah Palin, “I suspect there would be a lot of changes that I don’t like and the American people wouldn’t like, including everything from Roe v. Wade to issues relating to civil rights and civil liberties.”

Biden defended the constitutional right to an abortion during his presidential run in 2008. “I strongly support Roe v. Wade,” Biden said during a 2007 debate, when asked if he’d have an abortion litmus test for Supreme Court nominees. “I wouldn’t have a specific question, but I’d make sure that the people I sent to be nominated to the Supreme Court shared my values and understood that there is a right to privacy in the United States Constitution.”

But he’s never abandoned his personal opposition to abortion, even while supporting abortion rights policies for the government. “With regard to abortion, I accept my church’s position on abortion as a—what we call de fide doctrine,” Biden said in the 2012 vice presidential debate against Paul Ryan. “Life begins at conception. That’s the church’s judgment. I accept it in my personal life. But I refuse to impose it on equally devout Christians and Muslims and Jews.”

He’s hardly become the sort of clear-cut defender of reproductive rights that Democrats typically demand, particularly at a time when those rights are under assault, with frequent Republican attacks on Planned Parenthood. “I’m prepared to accept that at the moment of conception there’s human life and being,” Biden said during an interview with the Catholic magazine America ahead of the pope’s recent visit, “but I’m not prepared to say that to other God­-fearing, non­-God­-fearing people that have a different view.”

Biden might claim that he doesn’t let his own religious views affect his policy positions, but his record in the Senate tells a slightly different story. During the 1990s and 2000s, Biden received hit-and-miss marks from abortion rights groups that scored congressional votes. NARAL Pro-Choice America often granted him perfect scores for his votes in the mid- and late 2000s. But there were several years when Biden received abysmal marks from the reproductive rights advocacy group. In 2003, he got a 36 percent rating (on a scale from 0, for total disagreement, to 100, for complete alignment). He struggled throughout the 1990s as well, getting a 43 percent score in 1996, a 34 percent score in 1997, and a 46 percent score in 1999. NARAL wasn’t alone in taking issue with Biden’s voting record. Planned Parenthood Action Fund also gave Biden less-than-perfect scores, including a 58 percent average between 1993 and 1998.

His disagreements with those groups largely centered on two measures: partial-birth abortions and federal funding. Throughout his time in the Senate, Biden regularly supported the so-called Hyde Amendment, which prohibits federal funds from being directed to abortions. “Those of us who are opposed to abortion should not be compelled to pay for them,” Biden wrote in 1994. He also regularly sided with abortion opponents in the 1990s and early 2000s on bans on partial-birth abortion, or medically intact dilation and extraction. Biden approved final passage of the ban on these late-term abortions when it became a law in 2003. (Hillary Clinton voted against the measure.)

Biden avoids labeling himself as solidly pro-choice, preferring to present himself as a moderate on the issue. “I’ve stuck to my middle-of-the-road position on abortion for more than 30 years,” he wrote in his 2007 book Promises to Keep. “I still vote against partial birth abortion and federal funding, and I’d like to make it easier for scared young mothers to choose not to have an abortion, but I will also vote against a constitutional amendment that strips a woman of her right to make her own choice.”