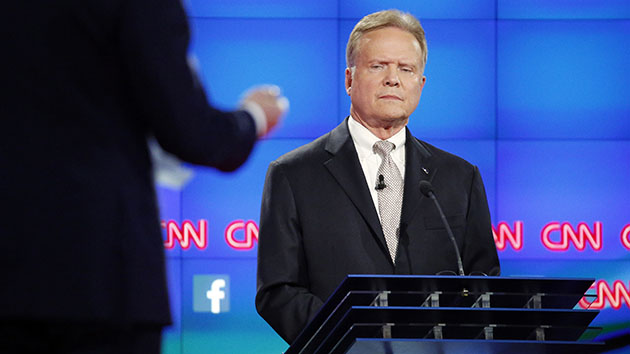 The race for the Democratic nomination may have already claimed its first victim—sort of. Jim Webb’s campaign announced on Monday evening that the former Virginia senator will hold a press conference tomorrow—probably—to discuss “his candidacy, the campaign and his views of the political parties in the current election cycle.” According to Webb’s campaign, he’s considering a run as an independent.

Webb’s lukewarm views on the Democrats aren’t much of a secret. Though he ran for Senate as a Democrat, he’s a former Republican who served in the Reagan administration. At last week’s debate, he said he ran for president as a Democrat because it’s “the party that gives people who otherwise have no voice in the corridors of power a voice.” But for him, America’s truly voiceless people are poor rural whites like his own family. That means he clashes with the party’s mainstream over major issues like gun control, affirmative action, and environmental regulation. Neither his views on those issues nor his frequent demands for more speaking time went over particularly well at the debate.

Dave “Mudcat” Saunders, a longtime advisor and friend of Webb, says Webb’s sometimes petulant debate performance was likely the “culmination” of the candidate’s anger at being sidelined by the party. “I think the frustration that Jim showed on the stage the other night, I think it had built up over a long time,” says Saunders, who’s not playing a role in Webb’s presidential campaign. But he also casts an independent run as a matter of Webb’s principles. “‘Duty, honor, country’ is what it’s about it, and he thinks this is the best thing for him to do.”

But if running as an independent gives Webb more freedom to say what he likes, there’s no evidence he’ll be able to do much with that freedom. Webb has no campaign offices in Iowa or New Hampshire, raised the second least of any active presidential candidate during the last quarter (we’re not counting barely-there former Virginia Gov. Jim Gilmore for these purposes), and is still polling at only 1 percent after the debate last week.