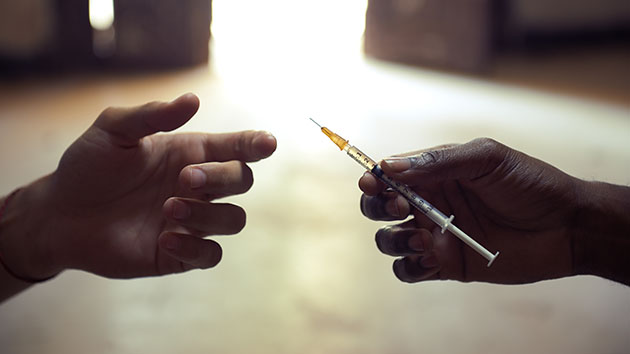 For the first time in Virginia’s history, more people died last year from overdoses on heroin and prescription opioids than from automobile accidents. The state joins 35 others that have seen heroin and opioid deaths eclipse traffic deaths, in an alarming trend that has begun to draw attention on the presidential campaign trail.

In 2014, 728 people succumbed to heroin or opioid-related overdoses, compared with 700 people who died in car crashes. A year earlier, the statistical comparison was flipped, with the highway death toll in Virginia at 741, compared with 661 deaths from drug overdoses. The year before that, in 2012, the numbers were even more skewed toward automobile accidents, as 750 traffic deaths trumped the 504 drug overdoses in the state.

As the rate of traffic deaths drops—those 700 deaths are the fewest in a decade—the heroin overdose rate continues to climb. According to the office of Virginia Attorney General Mark Herring, fatal heroin and prescription drug overdoses have increased by 57 percent over the last five years alone.

“This heroin and prescription drug epidemic is a public health issue, a public safety and law enforcement issue, and most importantly, it’s a family issue,” Herring’s office stated in a press release last week. “The rising and tragic death toll adds a dose of reality and a sense of urgency to our efforts and those of our local, state and federal partners.”

The rise in fatal overdoses is not limited to Virginia. In 36 states and Washington, DC, more people are dying from drug overdoses than from traffic incidents. According to the nonprofit Trust for America’s Health, more than 2 million Americans abuse prescription drugs, and the number of new heroin users has doubled over the past seven years. As opiates prescribed by physicians have become more expensive, people have turned to heroin, a cheaper option with similar effects. The Centers for Disease Control and Prevention report that heroin deaths quadrupled between 2000 and 2013.

Although heroin and opioid deaths are climbing at an alarming rate, less than 1 percent of the US population abuses heroin, according to the CDC. That figure, however, does not include people in the military, homeless people, or prison inmates, so the true number may be higher.

Presidential candidates have had to field questions about the growing trend while on the campaign trail. At an August public forum in New Hampshire, Democratic front-runner Hillary Clinton expressed surprise at the prevalence of the problem.

“I have to confess—I was surprised,” Clinton said. “I did not expect that I would hear about drug abuse and substance abuse and other such challenges everywhere I went.”

In May, New Jersey Gov. Chris Christie signed a bill designed to stymie substance abuse, and a week later expressed his frustration at what he considered a correctable issue. “This is a treatable problem,” Christie said. “And we need to be talking about it and treating it like an illness, and not like some moral failure.”

Former Hewlett-Packard CEO Carly Fiorina, whose daughter died in 2009 after years of drug and alcohol abuse, argued against imprisoning people for their drug problems. “Drug addiction shouldn’t be criminalized,” Fiorina told a group of reporters during a conference call in May. “We need to treat it appropriately.”