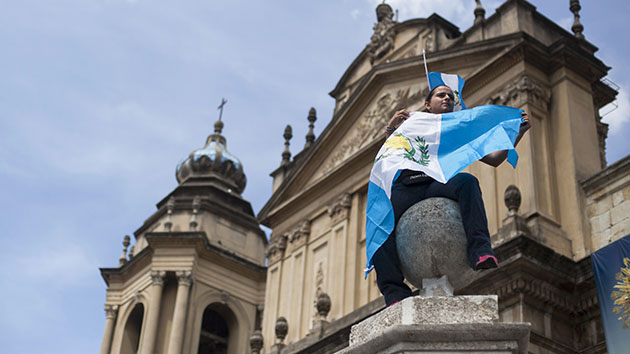 A demostrator holds a Guatemalan flag during a protest in Guatemala City on August 27, 2015.Luis Echeverria/ZUMA

Otto Pérez Molina resigned as president of Guatemala late Wednesday night, stepping down after being implicated in a widespread corruption scheme that earlier this year cost his vice president her job. Pérez Molina, a former military general, had refused to leave office almost until the end, defying the wishes of tens of thousands of protesters who have been calling for his resignation for months. Now he sits in jail, awaiting the results of a hearing examining the evidence against him.

But it is what happens next that is of interest to Guatemalans and regional experts. Alejandro Maldonado, who took over the vice presidency after Roxana Baldetti resigned on May 8, was sworn in as president Thursday afternoon, but the nation faces elections this weekend that could determine whether the country’s brand new era of accountability will last.

Adriana Beltrán, who has been tracking the so-called Guatemalan Spring for the Washington Office on Latin America (WOLA), said that simple, short-term goals will sustain the unprecedented coalition of groups who have spent months protesting in the streets.

“There are a number of sectors that have been working together and will continue to work together on a minimal, short-term anti-corruption agenda that they hopefully can advance in the next several months before the change of government,” she told reporters.

Beltrán said she was encouraged to see students from the public schools and the more conservative private schools, as well as members of the religious and business communities, working together. That these groups put aside their differences to call for the end of Pérez Molina’s tenure shows the country’s deep disdain for decades of political wrongdoing.

“It’s impressive because having the [Guatemalan chamber of commerce] come together with the human rights movement and the social movement and agree on a common agenda is not an easy thing—and not something you’ve seen in Guatemala regularly,” Beltrán told Mother Jones in an interview.

Guatemala’s next president will inherit a country dealing with some of the worst poverty and crime in the region—and one in which memories endure from a brutal 36-year civil war that killed 200,000 people. The biggest change is the country’s growing anti-corruption movement, which began in 2006 with the creation of the UN-backed International Commission Against Impunity in Guatemala (CICIG, in Spanish), an independent investigative body that teamed up with local prosecutors to root out ingrained, systemic malfeasance.

The United States has generally been supportive of the protests and calls for accountability, according to Beltrán. The Washington Post reported that the American Embassy in Guatemala City tweeted in Spanish its support of increased transparency.

Now attention turns to this weekend’s election. The leading candidate, a wealthy businessman named Manuel Baldizón, has his own ties to corruption through Edgar Barquin, his running mate. Barquin faces separate corruption charges for protecting businesses engaged in illegal campaign finance.  Another candidate is a former first lady, and a third, Jimmy Morales, is a comedian whose outsider candidacy, Beltrán said, could help him in the aftermath of Pérez Molina’s ouster. Whoever wins, she added, will now have to deal with a population that isn’t afraid to demand what it wants.

“It hasn’t been just about the governing party but also about the political system as a whole,” she said. “And what we are likely to see on Sunday’s election is a continuation of this demand for an end to corruption, a change in the political system, and people just not wanting the status quo, but truly demanding a change.”