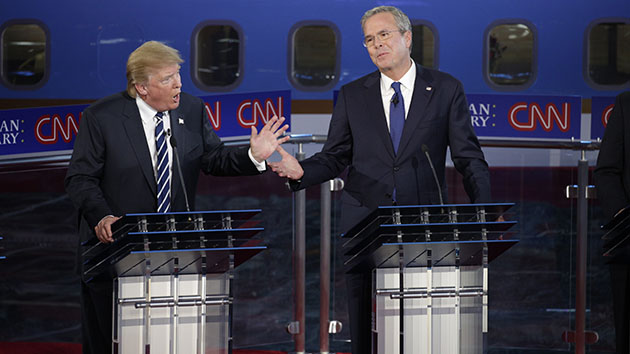 CNN’s prime-time debate between the 11 leading candidates for the Republican presidential nomination had no shortage of memorable and combative moments. This was thanks in large part to moderator Jake Tapper’s efforts to pit the candidates against each other by asking them to respond to something another candidate (usually Donald Trump) had said about them. Here are the highlights.

When Fiorina put Trump in his place for his comments about her looks
Former Hewlett Packard CEO Carly Fiorina went head to head with front-runner Trump several times during the debate, and she landed a few well-placed punches. Tapper asked Fiorina to respond to a recent comment Trump had made about her in Rolling Stone magazine, in which he said, “Look at that face. Would anyone vote for that? Can you imagine that, the face of our next president?” Fiorina’s response: “I think women all over this country heard very clearly what Mr. Trump said.”

When Trump trashed Fiorina’s business record
The two CEOs also sparred over each other’s business records (again, prompted by Tapper’s questions). “She can’t run any of my companies. That I can tell you,” Trump said, after trashing Fiorina’s leadership of Hewlett-Packard.

Fiorina hit right back. “I find it quite rich,” she said, that Trump would criticize her record. She then proceeded to charge that he had funded his casinos with massive amounts of debt and filed for bankruptcy four times. “Why should we trust you to manage the finances of this nation any differently than you managed the finances of your casinos?”

When Jeb Bush defended his brother’s foreign policy record…and Trump didn’t buy it
With his brother’s decision to invade Iraq under attack, Jeb Bush stuck up for brother George W. Bush. “You know what? As it relates to my brother, there’s one thing I know for sure. He kept us safe,” Bush said.

When Bush brought up his successful effort to keep Trump’s casinos out of Florida
Bush picked a fight with Trump over some forgotten history: Trump’s attempt to open casinos in Florida when Bush was governor. “The one guy that had some special interests that I know of that tried to get me to change my views on something—that was generous and gave me money—was Donald Trump,” Bush said.

This continued until Trump characteristically explained, “I promise if I wanted it, I would have gotten it.”

When Trump trolled Bush on women’s health
Trump also went after Bush for saying this summer that he’s “not sure we need a half billion for women’s health issues.” Shortly after making this comment, Bush said he misspoke. But Trump challenged him on his comments Wednesday night, saying he didn’t sound like he was misspeaking. “You said you’re going to cut funding for women’s health,” Trump said. “Why did you say it?”

“I will take care of women,” said Trump, who has come under fire for making demeaning remarks about women (see Fiorina and Megyn Kelly). “I respect women.”

The time Bush admitted smoking marijuana in high school, again
Bush fessed up to what newspapers have already reported and he has already admitted: that he smoked weed in high school. “So, 40 years ago, I smoked marijuana, and I admit it,” Bush said. “I’m sure that other people might have done it and may not want to say it in front of 25 million people. My mom’s not happy that I just did.”

Team Bush continued to play up the mom angle with a tweet before the debate had ended:

The issue of Bush’s marijuana use was raised by Sen. Rand Paul, who discussed how the war on drugs disproportionately hurt minorities.

When Kasich preached a multilateral foreign policy
After multiple candidates, including Fiorina and Sen. Marco Rubio, railed against the Iran nuclear agreement, Kasich spoke up for a multilateral approach to foreign policy. “Let me suggest to you we believe that we operate better in the world when our allies work with us,” he said. “President Bush did it in the Gulf War. We work better when we are unified.”

When Trump offered to relinquish his Social Security earnings
“I would be willing to check it off, and say I will not get Social Security,” the billionaire said.

“Don’t forget they pay in and they pay in, and maybe they do well, and maybe some people want it. But the fact is that there are people that truly don’t need it, and there are many people that do need it very, very badly,” he continued. “And I would be willing to write mine off 100 percent.”

When Trump attempted to give Ben Carson a high five
Neurosurgeon Ben Carson jumped on the anti-Iraq war bandwagon with Trump and Sen. Rand Paul. “When the issue occurred in 2003, I suggested to President Bush that he not go to war? Okay,” Carson said. “So I just want that on the record.” Trump, standing next to Carson at the center of the stage, raised his hand to give Carson a high five.

But Carson nearly left Trump hanging before timidly offering his hand for an awkward shake.

The time Trump offered his medical opinion on vaccines
Without going full anti-vaxxer, Trump said that allowing more time between vaccinations given to small children would have an impact on autism rates. “I am totally in favor of vaccines,” Trump said. “But I want smaller doses over a longer period of time…I think you’re going to see a big impact on autism.”

Dr. Carson offered his professional opinion. “He’s an okay doctor,” he said of Trump. Carson said that while vaccines are not linked to autism, spreading them out is a good idea.

Dr. Paul, an ophthalmologist, gave a second opinion on the subject. He called vaccines one of history’s great medical breakthroughs, but said that parents should have the right to space them out.

The time Huckabee mocked his wife’s spending habits
Asked what woman he would put on the $10 bill, Huckabee nominated his wife. “I’ve been married to her 41 years. She’s fought cancer and lived through it. She’s raised three kids, five great grandkids, and she’s put up with me. I mean, who else could possibly be on that money other than my wife,” he said. “And that way, she could spend her own money with her face.”