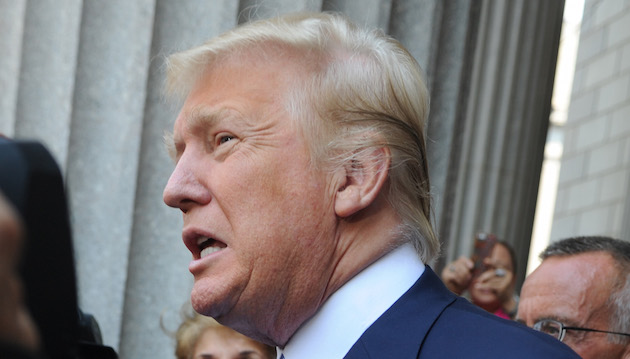 Donald Trump regularly boasts that he was opposed to the Iraq War. On Meet the Press this past weekend, he said, “And, as you know, for years I’ve been saying, ‘Don’t go into Iraq.’ They went into Iraq. They destabilized the Middle East. It was a big mistake.” In July, he reportedly told a conservative group in Hollywood that instead of invading Iraq the United States “should have invaded Mexico.” And he’s been consistent on this point for years. In a 2004 interview with Esquire, Trump dumped on the Bush-Cheney crowd for initiating a dumb war:

Look at the war in Iraq and the mess that we’re in. I would never have handled it that way. Does anybody really believe that Iraq is going to be a wonderful democracy where people are going to run down to the voting box and gently put in their ballot and the winner is happily going to step up to lead the county? C’mon. Two minutes after we leave, there’s going to be a revolution, and the meanest, toughest, smartest, most vicious guy will take over. And he’ll have weapons of mass destruction, which Saddam didn’t have. What was the purpose of this whole thing? Hundreds and hundreds of young people killed. And what about the people coming back with no arms and legs? Not to mention the other side. All those Iraqi kids who’ve been blown to pieces. And it turns out that all of the reasons for the war were blatantly wrong. All this for nothing!

So here’s the puzzle: Why would Trump pick one of the lead cheerleaders for the Iraq War to be a top foreign policy adviser?

In that Meet the Press interview, host Chuck Todd asked Trump to identify his “go-to” experts for national security matters. Trump said he “probably” had two or three. Todd pressed the tycoon for names, and the first one Trump mentioned was John Bolton, the George W. Bush administration’s ambassador to the United Nations. “He’s, you know, a tough cookie, knows what he’s talking about,” Trump said. (He also named retired Col. Jack Jacobs, an MSNBC military analyst.)

Bolton has long been one of the most hawkish of all the neoconservative hawks. He was part of the Bush-Cheney crew that claimed Saddam Hussein had amassed weapons of mass destruction and that war was the only option. As a top State Department official prior to the 2003 Iraq invasion, Bolton pushed the false claims that Iraq had obtained aluminum tubes and uranium for its supposed nuclear weapons program. He was also a supporter of a conspiracy theorist named Laurie Mylroie who contended that Saddam was behind the 9/11 attacks. Before Bush launched the Iraq War, Bolton predicted that “the American role actually will be fairly minimal.” (In 1997, he was one of several conservatives who wrote to President Bill Clinton and urged him to attack Saddam.)

Not surprisingly, Bolton has stuck to the position that the Iraq invasion was the right move. In May, he said, “I still think the decision to overthrow Saddam was correct.”

The Trump campaign did not respond to a request for an explanation of Trump’s reliance on Bolton’s advice.

Bolton, who flirted with the notion of running for president in 2016, has a long history of extreme positions. In 2009, he noted that the only way to stop Iran from obtaining nuclear weapons would be an Israeli nuclear strike on Iran—an option he seemed to endorse. In 2012, he backed then-Rep. Michele Bachmann’s call for an investigation of members of Congress supposedly connected to a Muslim Brotherhood plot to infiltrate the US government. This past March, Bolton called for the United States and/or Israel to bomb Iran’s nuclear infrastructure.

Bolton is not in an exclusive relationship with Trump. He has also advised other GOP 2016ers, including Sen. Ted Cruz and Gov. Bobby Jindal. But Trump’s reliance on Bolton is curious, for Bolton was neck-deep using false assertions to promote a war that Trump himself says was all for “nothing.” Bolton ought to have received a “you’re fired” pink slip from Trump. Instead, Trump solicits his views.

Would Trump have retained an apprentice who screwed up this badly?