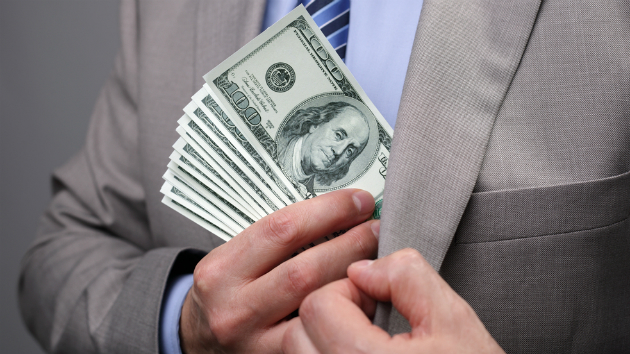 Last December, the outgoing Congress slipped language into a spending bill that created a loophole allowing donors to make much larger contributions to political parties. Both parties supported the rule change at the time. But only one has been able to capitalize on it. According to filings last week, the Republican National Committee has raised nearly 10 times as much as its Democratic counterpart from donors who took advantage of the new loophole.

Following the 2010 Citizens United Supreme Court decision that ushered in an era of unlimited donations to outside groups backing political campaigns, the super-PACs supporting presidential candidates have brought in eye-popping hauls. Jeb Bush’s super-PAC has raised more than $100 million, and a single donor cut a $10 million check to a Ted Cruz super-PAC. Party committees, which have seen their influence diminished as outside money flows freely, have tried to get creative in boosting their fundraising totals. The RNC, which will spend heavily on both the presidential race and congressional battles next year, has been much more successful: It’s raised $63 million this year, including $7.7 million in the month of July. The DNC has raised just $36.4 million, and $4.9 million in July.

A substantial portion of the Republican advantage comes from the new loophole. Previously, donors could contribute a maximum of $32,400 per year to the party. Now they can give not only $33,400 to the main fundraising accounts of the RNC and DNC (the same amount as last year, adjusted for inflation), but an additional $100,200 to three auxiliary fundraising accounts. That means an individual donor can now give a total of $334,600 a year to either party.

Six-figure donations have flowed to the RNC under the new rules, while Democrats have struggled to find people willing to write such large checks. The RNC has raised nearly $11.1 million from donors who gave to the new auxiliary accounts (ostensibly set up for legal costs, building costs, and the party conventions next summer). In July alone, the RNC had 12 different donors cut checks for $50,000 or more.

The DNC has raised just $1.3 million for these new accounts since the beginning of the year, much of it coming from transfers made by Democratic politicians with cash to spare in their own campaign accounts. In July, the DNC raised only $500,000 for these accounts and had just four donors who wrote checks over $50,000.

Part of the imbalance may come from Republican donors who already have their checkbooks out. Several of the big donors to the RNC in July are major supporters of presidential candidates. The largest contribution to the RNC by far was the $668,000 in donations from Hushang Ansary and his wife. Ansary was part of the Shah of Iran’s inner circle and served as the Shah’s ambassador to the United States before the Iranian Revolution. The Ansarys have donated $2 million to Right to Rise, the super-PAC backing Jeb Bush. Similarly, South Florida financier Bill Edwards donated $360,000 to the Bush super-PAC and $83,200 to the RNC in July.

Several major backers of Wisconsin governor Scott Walker also wrote large checks to the RNC. Ted Kellner and Jon Hammes, owners of the National Basketball Association’s Milwaukee Bucks, who just got Walker’s approval for $250 million in public financing for a new arena, donated a combined $200,000 to Walker’s super-PAC and $150,000 to the RNC in July. Anthony Scaramucci, a New York fundraiser who has taken a lead fundraising role for Walker, donated $33,400 to the RNC’s headquarters account.

In addition to the main committees, each party has two separate arms to raise funds for House and Senate races. Here, too, Republicans hold a lead over Democrats, both in overall fundraising and in donations to the new auxiliary accounts. The National Republican Congressional Committee, which supports House Republicans, has raised $46 million this year, including $3.4 million to the new accounts. The Democratic equivalent, the Democratic Congressional Campaign Committee, out-raised the NRCC by about $690,000 in July. But it still lags overall, with only $40.7 million raised in 2015, of which just $978,000 went to the new accounts.