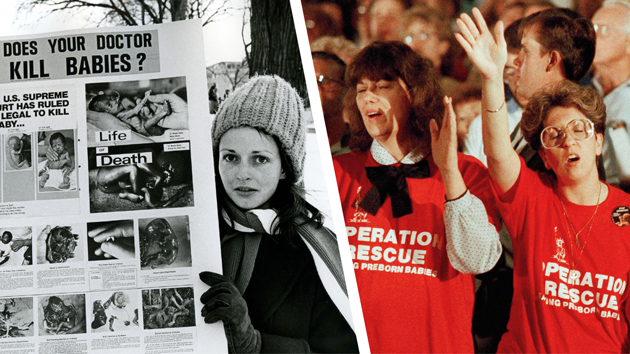 “This is the longest and broadest set of attacks we have seen.”

The number of attacks is unprecedented. Just a few weeks after Republicans in Congress made a failed attempt to defund Planned Parenthood, five states—Alabama, Arkansas, Louisiana, New Hampshire, and Utah—have cut off Planned Parenthood from federal and state Medicaid dollars. The funds, intended for low-income women, pay for family planning services, breast cancer and STI screenings, and abortions in cases of rape or threats to the health or life of the mother. The Obama administration warned two governors that the move violated federal law protecting patients’ rights to choose their provider. But that didn’t stop new states, including Arkansas, from continuing to slash the funds after the warning came down.

“This is the longest and broadest set of attacks we have seen,” says Elizabeth Nash, a researcher for the Guttmacher Institute, an abortion rights think tank.

This timeline traces the history of the crusade against Planned Parenthood, and with it, the destruction of family planning programs that continues today.

Where states have been faced with a choice between continuing to fund Planned Parenthood and losing out on critical federal funds, many have chosen to dissolve their family planning programs altogether.

The Minnesota legislature passes a sweeping law to end all state family planning funding to groups offering abortion, abortion counseling, or referrals. A federal judge strikes down the law in 1980, noting, “Planned Parenthood’s unpopularity in and of itself and without reference to some independent considerations in the public interest cannot justify [the law].” Similar laws in Arizona and North Dakota also tank. Anti-abortion activists start seeking a work-around to the rulings.

The Reagan administration imposes a new policy that prevents any foreign funding from going to health care providers that perform abortions. The move applies to hundreds of millions of dollars the government sets aside to promote family planning in impoverished countries. The policy is in place until President Bill Clinton rolls it back in 1993.

Colorado approves a constitutional amendment banning state funds from being spent on abortions.

California legislators accidentally send Gov. George Deukmejian a version of the state budget that bars any group providing abortion services from receiving money from the state’s $34 million annual family planning budget. Deukmejian, a Republican, refuses to veto the measure, which lawmakers had previously voted to remove. “The clear target of the provision, which was introduced…at the request of anti-abortion groups, is Planned Parenthood and its 16 local affiliates,” the Los Angeles Times reported. An appeals court struck the measure down.

California Gov. Deukmejian slashes the state family planning budget from $362 million to $12.1 million. The cut largely hits Planned Parenthood clinics that serve tens of thousands of California women. The legislature restores the funds the next year.

“The clear target of the provision, which was introduced at the request of anti-abortion groups, is Planned Parenthood and its 16 local affiliates.”

Michigan passes a new law that will become a model for stripping family planning funds from groups that provide abortions. The law creates a funding formula that assigns “demerits” to organizations that perform or refer for abortions. Organizations with demerits are the last to receive state funding for pregnancy prevention.

The Georgia legislature passes its own version of the gag rule, affecting $4 million in family planning services. “At the top of their hit list is Planned Parenthood,” writes the Atlanta Journal and Constitution‘s editorial board.

The Missouri legislature adds a provision to its budget barring state family planning funds for groups that provide abortion services. The law applies to only two clinics in the whole state—both are Planned Parenthood affiliates. A federal judge strikes the provision down within a few months.

Missouri lawmakers try to gut the entire $5.3 million family planning budget after Gov. Mel Carnahan, a Democrat, refuses to pledge that Planned Parenthood wouldn’t receive any of the funds. The attempt fails by 11 votes. The legislature will include provisions designed to cut funding to Planned Parenthood in every state budget until 2002.

Wisconsin bans state funds from being used for abortions, abortion counseling, or referrals for abortion, unless these services are necessary to save a woman’s life.

The incoming governor of Colorado, whose campaign promises included ending taxpayer funding for Planned Parenthood, orders the state health department to clarify that the 1984 constitutional amendment also bans groups providing abortion services from receiving family planning funds. The move threatens $320,000 that Planned Parenthood of the Rocky Mountains receives for 13 rural health clinics. The group spins off its abortion provider into a separate entity in order to keep receiving funds.

“My amendment would close the loophole that has forced millions of pro-life Americans to subsidize the nation’s leading abortion provider, sustaining and underwriting the destruction of innocent human life that has been carried out on a massive scale by Planned Parenthood.”

Planned Parenthood temporarily closes its Columbia, Missouri, clinic while it complies with another budget measure designed to prevent the group from getting state funds. A judge rules that the group did not adequately separate its family planning and abortion activities, and Planned Parenthood loses $804,000 in state funds for the year and is barred from receiving future funds.

US Rep. David Vitter, a Louisiana Republican who would later become a senator, offers an amendment to an appropriations bill that would bar abortion clinics from receiving Title X funds. The amendment—the first of many—is roundly defeated.

Colorado investigators determine that Planned Parenthood of the Rocky Mountains’ family planning clinic and abortion clinics are not sufficiently separate to comply with the law, and suspends $380,000 in Title X funds, affecting 13,000 poor women.

Rather than continue to finance several court battles over budget measures to defund Planned Parenthood, the Missouri legislature simply eliminates all state funding for family planning.

Texas approves a one-year budget that bars the use of state family planning funds by groups that offer abortions (except in emergencies) or that contract with organizations offering abortions.

The Texas budget requires abortion providers to be “physically and financially separate” from their family planning clinics in order to receive state funds.

Pence offers a similar amendment again. “My amendment would close the loophole that has forced millions of pro-life Americans to subsidize the nation’s leading abortion provider, sustaining and underwriting the destruction of innocent human life that has been carried out on a massive scale by Planned Parenthood,” he writes in a press release.

Citing a need to slash spending, newly elected Gov. Chris Christie cuts all $7.5 million in family planning aid from the New Jersey budget. Only $1.2 million of that money was destined for Planned Parenthood; the cuts affect 58 family planning clinics around the state.

“The taxpayers of New Jersey are under no obligation to fund the radical and failed social agenda of Planned Parenthood.”

As Democrats in the statehouse fight to restore the funds, Republicans say they oppose channeling any more state money toward Planned Parenthood. “The taxpayers of New Jersey are under no obligation to fund the radical and failed social agenda of Planned Parenthood,” said Marie Tasy, the director of New Jersey Right to Life, shortly after Christie vetoes efforts to restore the funding.

The US House passes a new measure introduced by Rep. Pence to prevent Planned Parenthood from receiving federal funds, including Medicaid and Title X grants. The amendment is attached to a critical spending bill and almost shuts down the government. The measure ultimately fails.

Arizona lawmakers ban the state from contracting with abortion providers, a measure that a federal judge overturned within the year.

The Indiana General Assembly bans the state from contracting with any abortion providers except for hospitals. The move is touted as a way to shut off all Medicaid dollars—more than $2 million—to Planned Parenthood. A federal judge blocks the law that summer.

The New Hampshire Executive Council, a branch of the governor’s office, votes to strip Planned Parenthood of $1.8 million in Title X funds.

The North Carolina General Assembly bans the state from contracting with Planned Parenthood, which receives $434,000 in family planning funds. The state later loses a court battle to enforce the law.

Gov. Rick Perry dissolved much of the state’s Medicaid program in order to exclude Planned Parenthood. The state walks away from $200 million in Medicaid dollars as a result.

The Texas legislature cuts a staggering $73.6 million out of its $111.5 million family planning budget. It allocates the remaining money according to a new, tiered funding formula inspired by Michigan’s two-decade-old demerit system. The tier system renders Planned Parenthood completely ineligible for state pregnancy prevention contracts. Other family planning clinics, including some that do not provide abortion services, suffer drastic reductions or closure under the new system. The cuts are fully in place for two years.

Texas lawmakers also eliminate Planned Parenthood clinics from the state program that provides preventive care, screenings, and birth control to 130,000 Texas women. The move causes the program to lose its federal designation, and with it, $30 million in federal Medicaid dollars for poor women’s health services.

In Wisconsin, new GOP Gov. Scott Walker proposes eliminating the state’s entire $3.4 million family planning budget. Republicans in the statehouse opt to merely cut the program back, to $1.7 million, by rejecting federal funds and using only state money. Rejecting the federal funds allows lawmakers to include a budget provision barring any organization providing abortions from access to the money. The new provision applies to only one health care provider: Planned Parenthood. Its nine Wisconsin clinics lose $1 million.

Building on the 1997 restriction that barred family planning funds from flowing to abortion affiliates, Walker also ends a $138,000 contract that paid for two Planned Parenthood caseworkers to sign up low-income women for breast cancer screenings. A county health department takes over the sign-up program.

A judge rules that Texas cannot bar a federally approved provider—Planned Parenthood—from participating in the state’s Medicaid program. Republican Gov. Rick Perry responds by dissolving much of the state’s Medicaid program and forming a new family planning program that excludes Planned Parenthood. The state walks away from $200 million in Medicaid dollars.

The Arkansas legislature bars public funds from going to most groups that provide or refer for abortions, a move intended to cut off grants Planned Parenthood used to run sex education programs.

On Thursday, the Center for Medical Progress dropped a seventh video. This one purports to show that Planned Parenthood alters its abortion procedures to better preserve fetal specimens for sale. “Planned Parenthood is a criminal organization from the top down,” said David Daleidin, the anti-abortion group’s founder, “and should be immediately stripped of taxpayer funding and prosecuted for their atrocities against humanity.”