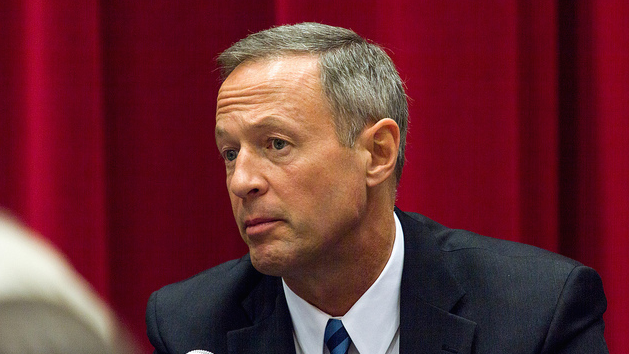 As they vie to emerge as the progressive alternative to Hillary Clinton, Vermont Sen. Bernie Sanders and former Maryland Gov. Martin O’Malley are racing to stake out territory to Clinton’s political left.

In April, O’Malley endorsed a $15 minimum wage. Sanders did the same within days. On a recent swing through Iowa, Sanders went beyond Clinton’s support of paid sick leave to endorse guaranteed vacation time. O’Malley, meanwhile, stumped on his opposition to the Trans Pacific Partnership, an enormous trade deal that has become a bête noire for liberals and labor groups. Clinton supported the deal as secretary of state, but has hedged on the deal as a presidential candidate.

Now, O’Malley has an answer to Sanders’ plan for tuition-free public college: a series of proposals to eliminate debt for students at all colleges, public and private.

The dueling proposals come after an aggressive push to place student loan debt at the center of the Democratic primary agenda by liberal advocacy groups, notably the Progressive Change Campaign Committee. The effort received a boost when Sen. Elizabeth Warren (D-Mass.) endorsed an unspecified path to debt-free college earlier this year. Clinton intends to roll out a student loan plan later this month.

O’Malley outlined his proposal Wednesday at Saint Anselm College, a Catholic liberal-arts school in New Hampshire. Under his proposal, all graduates with federal loans would automatically have their loan repayment schedules tied to their incomes, giving lower-income graduates more time to pay back the loans. (Currently, graduates must opt into income-based repayment and meet certain requirements.) Graduates with debt would be able to refinance their loans at lower rates, and students with private loans would be able to refinance into federal loans with lower rates. The plan also calls for states to tie tuition rates at public colleges and universities to the state’s median income.

The pitch comes several weeks after Sanders argued for taxing certain Wall Street transactions and using the profits to eliminate $70 billion of tuition and fees at state-funded colleges.

O’Malley’s student debt plan is in line with his stated strategy to show up Sanders with a more detailed liberal platform. (In June, O’Malley called Sanders a “protest candidate.”) Their contest has also led to sparring among several outside groups. The Progressive Change Campaign Committee called Sanders’ plan for student debt “narrower” than O’Malley’s, which closely follows the group’s vision for debt-free college. And in June, a super-PAC supportive of O’Malley paid for ads directed at voters in Iowa that hammered Sanders’ record on guns. One ad spotlights Sanders’ vote against the 1993 Brady Bill, which required federal background checks of gun purchasers. Sanders shot back that the National Rifle Association has given a D- to his voting record.

Still, early polling shows Sanders winning the majority of likely Democratic primary voters and caucus-goers who aren’t backing Clinton. In New Hampshire, where O’Malley released his college plan, Sanders trails Clinton by an average of 15 points, a margin that keeps shrinking. O’Malley, meanwhile, is hovering around 2 percent in Iowa and New Hampshire.