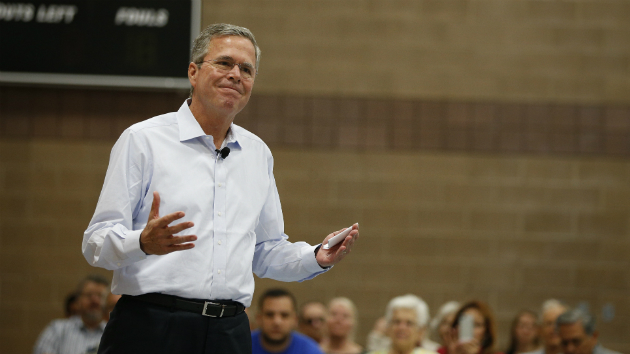 Right to Rise, the super-PAC backing former Florida governor Jeb Bush, reported raising $103 million in the first six months of this year. It’s a record haul for a super-PAC and more than almost every presidential candidate has ever raised for their primary campaigns. The group has already spent about $5 million, but claims to have more than $98 million in the bank, which it is waiting to unleash to boost Bush’s candidacy and demolish his rivals.

The super-PAC’s massive fundraising total doesn’t necessarily represent a huge swell of popular support. According to a statement released by Right to Rise, the organization raised money from just 9,900 donors. The super-PAC reports that at least 9,400 of them gave less than $25,000. That may sound like those donors are relatively small time—and they may be compared to the group’s largest donors—but considering the most an individual can give to Bush’s actual presidential campaign is $5,400, the super-PAC’s “small donors” are still big donors in the world of political fundraising.

By law, the super-PAC can’t coordinate its spending with Bush’s campaign, which was launched on June 15, but the news today makes it seem as if it really doesn’t need to. Just minutes before the super-PAC released its take this afternoon, the campaign announced its own fundraising total for first 16 days of its existence: $11.4 million. For now at least, Right to Rise is the real financial muscle behind Bush 2016.

From January until his official declaration last month, Bush worked closely with Right to Rise—something he could not legally do as an official candidate—attending fundraising events and drumming up support among major donors. Bush’s involvement with the super-PAC led some election watchdogs to cry foul, but it’s unlikely the Federal Election Commission will press the matter any time soon.

In a conference call with top donors that a BuzzFeed reporter listened in on last month, a top super-PAC official said the outfit planned to run a positive campaign in support of Bush. The group’s first online video pitched the group as a completely transparent organization devoted to showing “Jeb’s heart.” Late last night, Right to Rise reported its first official spending on the presidential race—$47,000 on attack ads accusing Hillary Clinton of not being transparent.

Who are the Bush backers that filled Right to Rise’s coffers? We’ll have to wait until week, when Right to Rise and the other presidential super-PACs will have to file with the Federal Election Commission and disclose their donors.