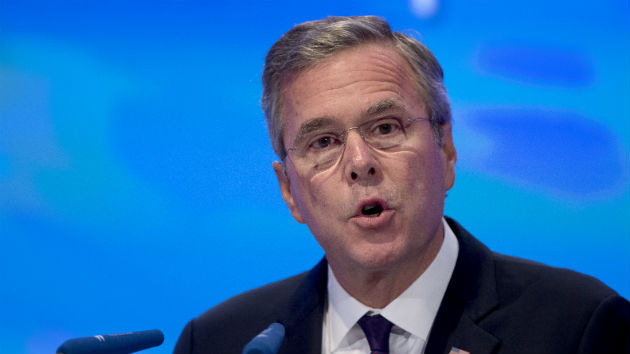 Jeb Bush officially declared that he was seeking the presidency two weeks ago, yet political observers have assumed he made the decision long ago and may have remained a shadow candidate for strategic purposes. Official candidates are not permitted under campaign finance law to coordinate with super-PACs, which can raise unlimited amounts of money. As a supposedly undecided candidate Bush could work closely with Right to Rise, the multimillion-dollar super-PAC supporting his candidacy. But recent statements by one of Bush’s top political allies suggest Bush may have coordinated with Right to Rise even after he technically qualified as an official candidate.

Election law states that once a candidate has started organizing a campaign—and, more specifically, raising funds for the campaign that go beyond what they might need to simply “explore”—he or she should file with the Federal Election Commission and accept only donations that are strictly limited in size. And, the law says, a candidate cannot coordinate his or her efforts with a super-PAC. Bush had what appeared to be a well-oiled and functioning campaign organization long before he declared his candidacy on June 15, but there was never any filing or official acknowledgement of his status. Campaign watchdog groups believe Bush was putting off announcing his presidential run as long as possible in order to fundraise for and plot strategy with Right to Rise. The Campaign Legal Center and other outfits filed complaints with the FEC and the Justice Department earlier this spring, alleging that Bush was technically a candidate even if he had yet to declare himself one, and thus was violating campaign finance rules by coordinating with the super-PAC. Last week, GOP strategist Mike Murphy, who’s heading Right to Rise, lent some weight to their allegations during a conference call with New York City-area donors, unaware that a Buzzfeed reporter was listening in.

During that call, Murphy made it clear that he had, until Bush’s official announcement, been party to Bush’s deliberations over how to run his future campaign. He told the donors that he “can’t coordinate anymore” with the Bush campaign but was “well informed as of a week ago,” according to Buzzfeed. Then Murphy delved into a discussion of the strategy that the campaign would follow and the complementary strategy the super-PAC would employ.

Murphy indicated that Bush and Right to Rise officials had intensive conversations about how the super-PAC would support the official campaign following Bush’s announcement. He noted the Right to Rise had already shot video footage of Bush to use in videos and political ads. “We’re going to be the first super-PAC to really be able to do just positive advertising, to tell his story, which is the missing ingredient right now,” Murphy told the donors. After Bush declared his candidacy, the super-PAC released its first digital ad on YouTube, featuring chirpy music and snappy animated text, lauding Bush’s success and describing itself as an “independent, transparent organization…Our goal is to show you Jeb’s heart.”

Several campaign finance experts say Bush’s close interactions with the super-PAC—even though he maintained publicly that he had yet to decide on a presidential run—may have violated the law. Paul Ryan, senior counsel for the Campaign Legal Center, says that when Bush and Right to Rise first started raising more money than was necessary for Bush to merely explore the idea of running—that is, when they raised money with the intention of using it to get Bush elected president—Bush, under the law, became an official candidate, whether he acknowledged it or not. If the super-PAC was shooting footage for campaign ads before Bush’s official announcement with his participation, that cuts against Bush’s position that he was merely exploring a presidential run. Ryan describes Bush’s involvement with the super-PAC video shoot as “classic textbook coordination,” adding, “Their whole fig leaf argument is going to be, ‘But, he wasn’t a candidate, ha! Ha!.’ But we’re going to say he is.” Ryan’s group has filed complaints against Bush and the super-PAC with the FEC and the Justice Department, citing Bush’s slipups in which he referenced his campaign and his campaign-like activities throughout the spring, including trips to Iowa and New Hampshire and the recruitment of fundraisers and campaign advisers. Ryan maintains the conference call adds to the evidence that Bush’s campaign and the super-PAC coordinated.

Rick Hasen, an election law expert and a law professor at the University of California-Irvine, also says Bush’s dealings with the super-PAC raise legal questions. “The position appears to be that this was perfectly acceptable behavior until the moment he filed his official papers, and I think that’s problematic. I think he’s been a candidate and he has been flaunting the rules,” Hasen says. Like Ryan, Hasen considers the coordination between Bush and the super-PAC to be a serious issue. “He seems to have put his super-PAC on autopilot and just given it instructions to go do what it does,” Hasen says.

Kristy Campbell, a spokeswoman for the Bush campaign, denies that Bush has coordinated with Right to Rise.

“Governor Bush has no control over the Right to Rise super-PAC’s activities.  It is an independent group,” she says. “We have and will continue to comply with all applicable campaign finance laws.”

Paul Lindsay, a spokesman for the Right to Rise super-PAC, downplays the importance of Murphy’s comments and says they were only referring to Bush’s publicly documented thoughts on campaigning.

“The comments were in reference to Gov. Bush’s historical preference for positive advertising, which was consistent in his previous elections and is no secret,” Lindsay says.

Neither Hasen nor Ryan are optimistic that the FEC will take any action on Bush’s alleged coordination before the 2016 election. But Hasen says this doesn’t mean nothing will come of that matter. In 2004, he notes, there were questions raised about liberal billionaire George Soros’ donations to political groups, and it took several years for the FEC to adjudicate the matter, but by 2008 the case had resulted in new rules. The groups were ultimately fined $775,000 in 2007.

“This may be important, not for this election, but for future elections,” Hasen says.