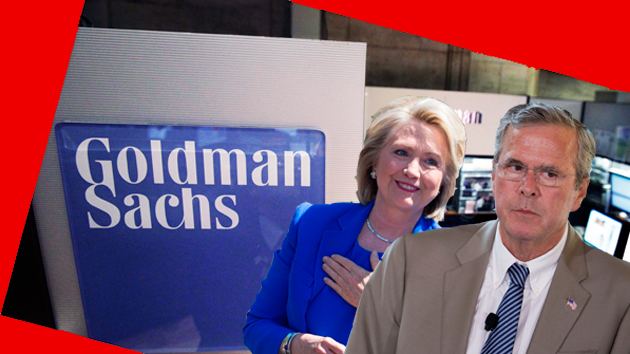 Over the past three months, Goldman Sachs employees have donated more than $147,000 to Jeb Bush’s presidential campaign, helping him to an early lead in what might be called the Goldman Sachs primary. But winning the biggest share of contributions from the controversial, economic-crash-enhancing investment firm isn’t going to be a cakewalk for Bush. At least three other major presidential candidates—including Hillary Clinton, who has longstanding ties to the Wall Street giant—have bagged money from Goldman, with two of them using Goldman Sachs lobbyists to raise money for their campaigns.

Bush’s biggest rival in the Goldman money chase is his fellow Floridian, Sen. Marco Rubio. Rubio’s campaign snagged just over $60,000 from Goldman Sachs. And Rubio has a Goldman insider hitting up his own network of wealthy friends for contributions. One of the three registered lobbyists bundling donations for Rubio is Joe Wall, a vice-president for government affairs at Goldman Sachs. Wall has so far reported bundling more than $90,000 for Rubio.

Clinton, the Democratic front-runner, places third in in the Goldman sweepstakes. Her campaign reported raising at least $49,000 from Goldman Sachs donors. Like Rubio, she has a registered Goldman Sachs lobbyist drumming up donations on her behalf. According to the campaign’s filings, Steve Elmendorf, a major name on K Street, has bundled more than $141,000 for Clinton. Elmendorf’s many clients include Churchill Downs, the NFL, and the Human Rights Campaign—and Goldman Sachs. Clinton also has a history of raising big bucks from Goldman-ites. In 2008, her presidential campaign brought in more than $407,000 from the firm.

At the back of this pack is Sen. Ted Cruz (R-Texas), who has raised a mere $10,100 from Goldman Sachs employee. That’s something of a surprise, given that Cruz has a personal connection to the bank. His wife, Heidi Nelson Cruz, is a managing director at Goldman Sachs, though she has taken unpaid leave from the bank for the duration of her husband’s campaign. Even so, Cruz’s senatorial campaign previously raised $69,000 from Goldman Sachs employees, making the investment bank the fourth largest source of cash for the campaign that brought him to Washington and the national stage.

Among the other top-tier candidates, neither Rand Paul nor Bernie Sanders had any identifiable donations from a Goldman Sachs. (Scott Walker hasn’t filed any campaign disclosure forms yet.)