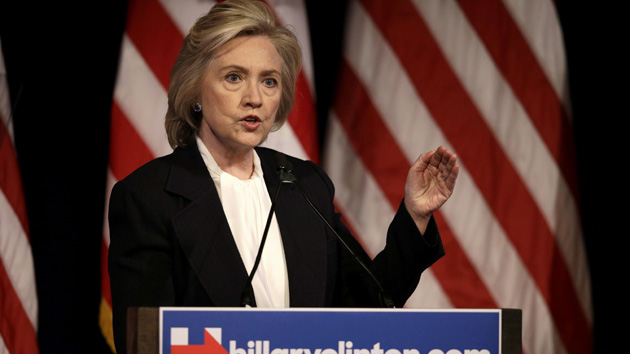 Hillary Clinton’s first major economic speech of the 2016 campaign had one clear target: Jeb Bush. The former Florida governor and top Republican fundraiser has pledged that, if elected president, he’d ensure 4 percent annual growth for the country. Clinton acknowledged the importance of growth but, without directly naming Bush, said that wasn’t enough. “I believe we have to build a growth and fairness economy,” she said. “You can’t have one without the other.”

In a speech at the New School in New York City Monday morning, Clinton laid out a broad vision of what she’d do to make the economy fairer should she win next year—though it was scant on policy details, with many promises of specific proposals to come in the next few weeks. “The defining economic challenge of our time is clear,” she said. “We must raise incomes for hard-working Americans so they can afford a middle-class life.” Clinton promised to bring more women into the workforce with family-friendly policies, amend the tax code that lets the rich pay lower rates, end the misclassification of employees and contractors, and fix business incentives to focus on the long term rather than quarterly reports.

Clinton avoided discussing her Democratic primary rivals in a speech that appeared tailored to the general election. Clinton painted Republicans as obsessed with trickle-down economics and accused Marco Rubio of promoting a tax plan that would channel money to the rich.

But Bush got the most attention. “You may have heard Gov. Bush say last week that Americans just need to work longer hours,” Clinton said. “Well, he must not have met very many American workers.” Clinton ticked off a list of professions where full-time work no longer guarantees people a sufficient livelihood. “They don’t need a lecture, they need a raise.” Clinton also defended the economic legacies of Presidents Bill Clinton and Barack Obama with a dig at the past two Bush presidencies. “Twice now in the past 20 years,” she said, “a Democratic president has had to come in and clean up the mess left behind.”

Though she didn’t discuss Bernie Sanders or Martin O’Malley, the anti-Wall Street crusader Sen. Elizabeth Warren—a liberal favorite who declined to mount a primary challenge against Clinton—was clearly on Clinton’s mind. Clinton’s remarks came into sharpest focus when she discussed the need for Wall Street reform. “Too big to fail is still too big a problem,” Clinton said, vowing to appoint regulators who would keep the banks in check.

She borrowed one of Warren’s favorite attacks: that the Obama administration has been too deferential to banks by being unwilling to use prosecutorial powers against specific Wall Street executives. “We will prosecute individuals as well as firms when they commit fraud or other wrongdoing,” Clinton promised.

It’s not just the major banks, Clinton said, but the hedge funds and nebulous financial firms that constitute the shadow-banking sector that need to be regulated. “We have to go beyond Dodd-Frank,” she said, referring to the financial regulation law. “Too many of our major financial institutions are still too complex and too risky.”