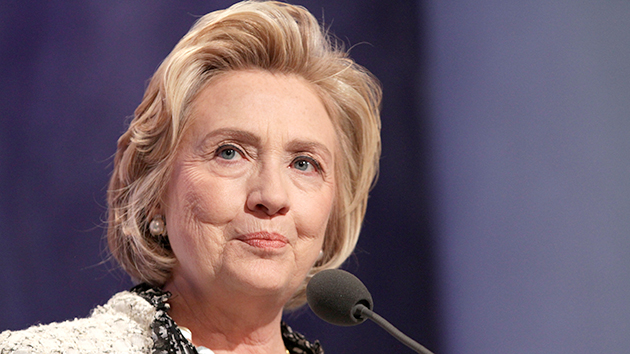 Hillary Clinton took a strong stance on clean energy Monday, telling a crowd in Des Moines, Iowa, that her efforts to tackle climate change would parallel President John F. Kennedy’s call to action during the space race in the 1960s.

“I want to get the country back to setting big ambitious goals,” Clinton said. “I want us to get back into the future business, and one of the best ways we can do that is to be absolutely ready to address the challenge of climate change and make it work to our advantage economically.”

Her remarks tracked closely with an ambitious plan her campaign released Sunday night, which set a target of producing enough renewable energy to power all the nation’s homes and businesses by 2027.

“America’s ability to lead the world on this issue hinges on our ability to act ourselves,” she said. “I refuse to turn my back on what is one of the greatest threats and greatest opportunities America faces.”

“I think it’s bogus,” said Bill McKibben. “The more she tries to duck the question, the more the whole thing smells.”

Still, the Democractic front-runner refused—as she has several times before—to say whether or not she supports construction of the Keystone XL pipeline. That project, which would carry crude oil from Canada’s tar sands to refineries and ports in the United States, is seen by many environmentalists as a blemish on President Barack Obama’s climate record. It has been stalled for years in a lengthy State Department review that began when Clinton was still Secretary of State. The Obama administration has resisted several recent attempts by Congress to force Keystone’s approval, but it has yet to make a final decision on the project—although one is expected sometime this year.

“I will refrain from commenting [on Keystone XL], because I had a leading role in getting that process started, and we have to let it run its course,” Clinton said, in response to a question from an audience member.

Her non-position on Keystone earned derision from environmentalist Bill McKibben, whose organization 350.org has been at the forefront of opposition to the pipeline.

“I think it’s bogus,” he said in an email. “Look, the notion that she can’t talk about it because the State Dept. is still working on it makes no sense. By that test, she shouldn’t be talking about Benghazi or Iran or anything else either. The more she tries to duck the question, the more the whole thing smells.”

Clinton also punted on an audience request to reveal further details of how exactly she would finance the renewable energy targets she announced yesterday, which aim even higher than those already put in place by Obama. She reiterated that one key step would be to ensure the extension of federal tax credits for wind and solar energy that have expired or are set to expire over the next few years. And she said that she would continue Obama’s practice of pursuing aggressive climate policies from within the White House, saying that “we still have a lot we can do” without waiting for a recalcitrant Congress to act.

Clinton acknowledged that the clean energy boom would come at a cost for the US coal industry, which is already in steep decline. She said she would “guarantee that coal miners and their families get the benefits they’ve earned,” but didn’t elaborate on what she meant or how specifically she would achieve that.

Environmental groups offered a generally positive reaction to Clinton’s policy announcement Sunday. In a statement, League of Conservation Voters vice president Tiernan Sittenfield commended her for “calling out climate change deniers and effectively illustrating the urgent need to act on a defining issue of our time.” She also earned praise from billionaire environmentalist Tom Steyer, who has set a high bar on climate action for any candidate who wants to tap his millions.

“I refuse to let those who are deniers to rip away all the progress we’ve made and leave our country exposed to climate change,” Clinton said.