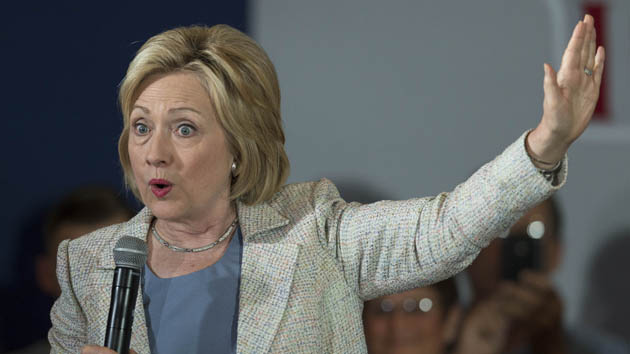 With Bernie Sanders nipping at her heels in the presidential primary, Hillary Clinton is doing all she can to let liberal financial wonks know she’s on their side. The Democratic front-runner laid out her vision Friday for getting Wall Street to focus on long-term growth rather than just what she termed “quarterly capitalism”—business deals aimed at quick stock gains. In a speech at New York University, Clinton detailed a host of policy ideas to tackle the problem, such as creating a new tiered system to raise capital gains taxes, raising the minimum wage for certain workers, and diminishing the power of activist shareholders.

Slipped in among the big-picture reforms was a shout-out to an obscure, seemingly minor provision of Wall Street reform. “Many rules have yet to be put in place,” Clinton said, referring to the terms of the 2010 Dodd-Frank financial reform law. “That includes a requirement to publish the ratio between CEO pay and the paychecks of everyday employees. There is no excuse for taking five years to get this done. Workers have a right to know whether executive pay at their company has gotten out of balance—and so does the public.”

Clinton was referring to Section 953(b), a provision in Dodd-Frank that simply required companies to report the ratio between CEO pay and the company’s median wage. Those numbers would just have to be crunched and included in public companies’ annual reports. But the Securities and Exchange Commission (SEC) has been sitting on that rule for five years now, much to the chagrin of liberal reformers.

Dodd-Frank was an ambitious, wide-reaching law, meant to reshape the way the financial industry operates. Congress set the broad parameters, but left it to executive-branch bureaucrats to pin down the exact details of how all these new rules would be carried out, causing countless delays. Deadlines written into the bill proved overly ambitious, especially as Republicans in Congress refused to increase funding so that financial regulatory agencies could hire enough new employees to put the rules into place.

For Dodd-Frank’s fifth anniversary earlier this month, Public Citizen published a report urging the Obama administration to enact the law more quickly. Out of about 400 rules mandated by Dodd-Frank, fewer than two-thirds are currently being enforced. “Major portions of the law have yet to be codified into specific rules,” Bart Naylor, the report’s author, wrote. “Many enforcement dates are set well into the future, and certain rules are not yet being implemented and enforced to the fullest extent of the law.”

The CEO disclosure delay has particularly irked financial reformers and consumer advocates, given the rule’s simple premise. In 2013, the SEC voted 3-2 to move forward with writing a rule. It proposed one shortly thereafter and set a 60-day public comment period. But then silence, with no visible progress and no finalized rule. Initially, the commission promised to wrap up work by October 2014, but that deadline passed as the agency stalled on scheduling a vote.

Liberals have become increasingly vocal about their displeasure at the delay. Last December, 15 Democratic senators wrote a letter to the SEC requesting immediate action to finalize the rule. “While some opponents may prefer not to disclose this information,” the letter said, “Congress already enacted and the President already signed the requirement into law more than four years ago.” Two weeks ago, the AFL-CIO, MoveOn, and an array of liberal financial reform groups delivered a petition to the SEC, with 165,000 signatories requesting action on the rule.

Last month, frustration with SEC Chairwoman Mary Jo White spilled into the public with a scathing letter by Sen. Elizabeth Warren (D-Mass.). “You have now been SEC Chair for over two years, and to date, your leadership of the Commission has been extremely disappointing,” Warren wrote, specifically pointing to the failure to implement the CEO pay rule, among other complaints. Warren accused White of directly lying to her during a closed-door meeting in May, in which White tried to assure Warren that the rule was coming soon. “I cannot understand how and why this rule has been delayed for so long,” Warren wrote, “and I am perplexed as to why you told me personally that the rule would be completed by the fall of 2015 when it appears that you were or should have been aware of additional delays.” The SEC didn’t respond to a phone call seeking comment.

It remains to be seen if White will keep her promise to Warren to finish things up by the fall. But it might be harder for the commission to keep ignoring the rule now that Clinton has joined the chorus of Democrats denouncing the SEC’s indecision in public.