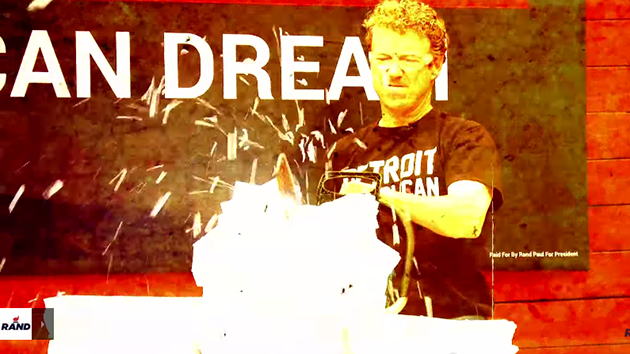 Rand Paul takes a chainsaw to the US tax code.randpaul.com

Trailing in the polls, former Arkansas Gov. Mike Huckabee grabbed the media’s attention this weekend by claiming that President Barack Obama’s nuclear agreement with Iran is “marching the Israelis to the door of the oven.” On Friday, Texas Sen. Ted Cruz made headlines by calling fellow Republican Mitch McConnell—the Senate Majority Leader—a liar on the Senate floor. A few days before that, Rand Paul literally took a chainsaw to the tax code over an electric-guitar rendition of the “Star Spangled Banner.”

The first Republican presidential debate is next Thursday on Fox News. And under rules set by Fox (with the blessing of the Republican National Committee), just 10 of the 16 declared major candidates—those with the highest average in the five most recent national polls leading up to the debate—will get a spot on the stage. Participants in the second debate, hosted by CNN in September, will also be selected based largely on polling averages. The result is a last-minute scramble by the candidates to crack the top 10 any way they can.

Following the circus of 20 GOP primary debates during the last presidential cycle, the party establishment has worked hard this year to limit the number of debates and participants. But the strategy has launched a game of headline-making one-upmanship as candidates seek to raise their profiles and poll numbers. A spot on the debate stage means more press coverage, which in turn means more fundraising and a better shot at the nomination.

The battle for media coverage is made that much tougher because Trump is “sucking up all the oxygen in the room,” says O’Connell, who worked on John McCain’s 2008 presidential campaign. But O’Connell doesn’t blame Fox or the RNC for the frenzied rush to make it into the top 10 and the “off-color” comments it’s producing. With 16 declared candidates, they have to winnow the field somehow to make the debates work, he says.

In a Wall Street Journal op-ed Sunday, RNC communications director Sean Spicer defended Fox’s strategy of limiting the debate to the top 10 candidates based on national polls. And he noted that Fox and CNN will both host secondary debates for the candidates who don’t make the top 10.

Currently in 12th place, Santorum has lashed out at Fox News and the RNC, arguing that the setup gives Fox News undue influence over who gets to participate in the debates. “What’s driving national numbers is news coverage,” Santorum told reporters at the weekly Christian Science Monitor Breakfast in Washington earlier this month. “They control in some respects the ability to put their thumb on the scale.”

In at least one way, Fox News is the big winner. In an effort to stay in the stop 10, Christie bought $250,000 of ad time this week on the conservative news network. And Christie’s investment is a pittance compared to the millions, according to the New York Times, that some super-PACs affiliated with the candidates have already spent to advertise on Fox to raise their candidates’ profiles among Republican voters.

How far will Republicans go to get attention? “I’m drawing the line at self-immolation,” Paul said in a Boston Herald Radio interview last week. “None of us are going to set ourselves on fire.” But, he acknowledged, he did set the tax code on fire.