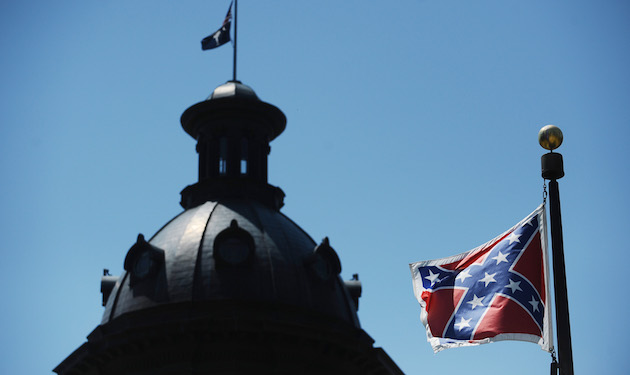 The Confederate flag with the dome of the South Carolina capitol in the distance.Rainier Ehrhard/AP

The death of nine innocent worshippers may achieve what decades of civil rights activism failed to do: Force South Carolina to remove the Confederate battle flag from grounds of its capitol building.

The Confederate battle flag flew over the capitol dome in Columbia, S.C., from 1962, when the legislature hoisted it as a symbol of defiance against integration, to 2000, when huge protests convinced state lawmakers to move it elsewhere. But it didn’t go far: The flag has flown over a Confederate soldiers’ memorial on the capitol grounds ever since.

The shooting in Charleston is leading to new calls to take down the Confederate flag for good, including one from the mayor of Columbia:

Columbia SC mayor says getting rid of Confederate flag would “serve as the greatest moral lift to the people of SC.” http://t.co/JQDi5iaXWh

Now we’ve also seen some tentative hints that figures on the right may actually be willing to let that happen:

The South Carolina governor infamously called a non-issue during her re-election campaign last year because she “had not had one conversation with a single CEO about the Confederate flag” during calls with business leaders. She also rejected at least one previous call by the NAACP to remove the flag.

But during an interview on Friday with Reuters, Haley seemed open to re-examining the deal that moved the Confederate flag to its current spot

“If they want to have this conversation again, they will,” Haley said of the state legislature. “They had it 15 years ago. They came to [a] consensus, that’s where it was. I think they’ll have another conversation, and we’ll bring people together.”

Many people, including us, blasted the South Carolina senator and Republican presidential candidate when he told CNN on Friday morning that the flag is “part of who we are” in his state. But he also said he was open to changing the capitol’s awkward compromise on the flag.

“It’s time for people in South Carolina to revisit that decision,” he said. “It would be fine with me.”

During the 2012 GOP primaries, Graham called the use of the flag at the Confederate War Memorial a “bipartisan” solution and advised candidates to avoid the topic altogether. “Any [candidate] who brought that up wouldn’t be doing themselves any favors,” he said to The Hill.

Writers at the conservative magazine—which firmly backed the South’s mantra of states’ rights during the civil rights era—debated the use of the flag on Thursday. Executive Editor Reihan Salam came out firmly against it:

It could be that the Confederate battle flag has come to mean something entirely different in 2015 than it did in the mid-1950s, when it was closely tied to resistance to federal desegregation efforts. But is its value such that we ought to continue giving it quasi-official status, even when doing so alienates the descendants of enslaved southerners, who have just as much claim to deciding which symbols ought to represent southern heritage as the descendants of Confederate veterans? I don’t believe so.

Others were more skeptical: Ian Tuttle argued that “objections to [the flag] are not raised in good faith” but rather for political gain. But even he then acknowledged that the flag can cause serious harm and offense.

One can recognize, understand, and sympathize with the revulsion symbols of the Confederacy occasion in some quarters, particularly among black Americans — and a compromise should be possible. If reducing the visibility of these symbols would offer relief to those genuinely hurt, and would remove an object of contention keeping persons of different races from cooperating to advance true racial justice, that is something supporters of Confederate symbols should be able to do.

The pro-choice, pro-marriage equality Massachusetts governor is hardly an arch-conservative, but his experience on Thursday shows how the shock of the shooting may be acting on politicians. Baker told Boston’s WGBH early on Thursday afternoon that while he was against the flag personally, it was a “tradition” of South Carolina. “My view on stuff like this is that South Carolinians can make their own call,” he said.

Within hours, Baker was backtracking hard. “What were you thinking?” was the message he received from friends, he told the Boston Globe that evening. “I just want to be clear: I abhor the symbolism and the history of that flag as much as anybody, and I am more than cognizant of the fact that literally millions of Americans died over what it represents in the Civil War,” he said. “I think they should take the flag down.”