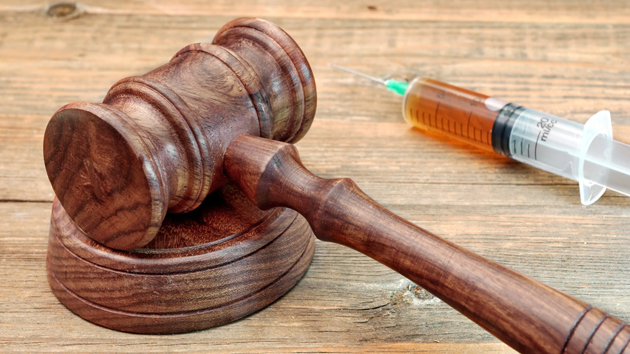 “You’re not going to give me a lethal injection, are you?”

This was a few weeks ago, and I was joking—nervously—with a nurse who had just plopped down a vial of midazolam on the table next to me, prompting a minor freak-out on my part. Midazolam is the drug implicated in the recent string of botched executions by lethal injection—debacles I’ve spent much of the last year writing about. It’s also at the heart of this week’s Supreme Court decision allowing those questionable executions to continue. As I was about to undergo minor outpatient surgery in the hospital, receiving a drug that’s regularly employed by states to help kill people felt horrifyingly wrong.

Death penalty abolitionists and many medical groups have decried the medicalization of capital punishment—that is, using healing tools to kill people through lethal injection. I was on the flip side of that equation: a patient getting an execution drug as a healing tool. It felt absurd and scary, even though I knew objectively midazolam wasn’t going to kill me. Midazolam is a sedative, and as the anesthesiologist told me, it is highly effective for minor surgical procedures because it wears off fast and yields few side effects. Those same properties that made midazolam beneficial to me are precisely the reasons it doesn’t work so well in executions: The drug (also sold as Versed) doesn’t put you in a coma-like state, where you’re impervious to all pain, and the mild unconsciousness it does prompt doesn’t last very long. For major surgery, and even minor surgery, doctors have to use additional drugs to keep you under.

Midazolam worked well for me. I was out for an hour while under the knife. When I woke up, I remembered nothing, and my head was clear. But I couldn’t help wondering if that pleasant sleep I’d just had would have been so pleasant if it had been followed by an injection of pancuronium bromide, which states use to paralyze an inmate and suffocate him. Or what about a shot of potassium chloride, the third drug in most states’ three-drug execution cocktail? Potassium chloride stops the heart, but its administration can be excruciatingly painful. In her dissent this week in the lethal injection case, Justice Sonia Sotomayor called it “the chemical equivalent of being burned at the stake.”

I didn’t want to think too long about this. But that was the task handed to the Supreme Court: considering whether the sedative effect from midazolam was enough to protect an inmate from the pain of being killed with other painful drugs. In the 2014 execution of Clayton Lockett in Oklahoma, a dose of 100 milligrams of midazolam—more than 10 times what I received—wasn’t enough to keep him from waking up while the executioners pumped potassium chloride into his veins. (It didn’t help that his incompetent executioners screwed up the catheter insertion and punctured his vein.)

Oklahoma now promises to use 500 milligrams of the drug, claiming that this dosage should do the job of knocking a man out. But the state really can’t say for sure. There isn’t any scientific research on how much midazolam is required to dull the pain of a chemically induced death. The drug is designed to keep people alive. One of its most common uses is as a light anesthetic during a colonoscopy, which can be done without anesthesia at all. Midazolam’s surgical dosing is calibrated on a patient’s height and weight and other individual factors. State execution protocols are a one-size-fits-all sort of scheme; they don’t account for variations in weight, health, or past drug abuse history—all of which can alter how midazolam might affect a person.

After Oklahoma botched Lockett’s execution, lawyers for other death row inmates tried to find out how the state came up with this particular dosing scheme, but the officials refused to say. For all we know, they took their cues from Conrad Murray, Michael Jackson’s personal physician.

After my operation, my surgeon, a Los Angeles native, told me that Murray had used midazolam on the King of Pop before he died in 2009. It turns out there are some similarities between Jackson’s treatment and state execution procedures. Based on law-enforcement records, People magazine published the whole timeline of the days before Jackson’s death, showing how Murray experimented on him with increasing doses of midazolam, along with other drugs, to try to help him sleep. The midazolam, though, didn’t work. Jackson remained wired. Ultimately, he died from a massive dose of propofol, a commonly used surgical anesthetic, and Murray went to jail for involuntary manslaughter.

Not long after Jackson died, death penalty states began struggling to obtain the drugs they’ve historically used to render an inmate unconscious before killing him. The manufacturer of sodium thiopental, a powerful anesthetic long used in executions, stopped making it so it couldn’t be used in executions. In 2010, the United Kingdom banned its export, and the European Union soon followed suit. The European manufacturer of pentobarbital, a drug substituted for thiopental, has refused to sell it to American corrections officials for executions. Since then, states’ efforts to find suitable replacement drugs look like they could have come straight out of People.

In 2012, state corrections departments announced plans to use propofol, the same drug that killed Jackson. But when Missouri attempted the first lethal injection with propofol, the drug manufacturer threatened to stop exporting it to the United States, which would have caused a national health care crisis because there are no domestic sources of propofol. So the states had to turn to something else. That something else was midazolam, a fast-acting anti-anxiety medication in the same family as Valium, which doesn’t produce the deep unconsciousness that thiopental did. It also has a ceiling effect: Larger doses don’t necessarily produce more sedation, as Murray saw with Jackson.

The midazolam packaging doesn’t say how much of the drug would satisfy prohibitions on cruel and unusual punishment in an execution. Like Murray, state corrections officials seem to have been guessing wildly about an effective dosage. When Ohio first used midazolam in January 2014, it gave 10 milligrams to Dennis McGuire, who proceeded not to die for 24 minutes, during which he made snorting and snoring noises and gasped for air, suggesting he wasn’t unconscious. So the state decided next time it would try 50 milligrams.

But in July of last year, Arizona gave the 50-milligram dose to inmate Joseph Wood, in a drug cocktail that included the painkiller hydromorphone. Executioners had to inject him 15 times, for a total of 750 milligrams of midazolam, over the course of two hours, during which he moved around and gasped for air before he finally died. Florida, the first state to try midazolam in an execution, has consistently used 500 milligrams. But its first use of the drug led to a drawn-out execution in 2013. Other states have now adopted Florida’s dosage, including Oklahoma, and that’s what the Supreme Court evaluated in the decision this week.

In upholding the use of midazolam, the court discounted the botched executions—nothing cruel and unusual here—and found that the use of a massive dose of the drug (without any real scientific guidance) is perfectly fine. It essentially allowed the long history of human experimentation by corrections officials to continue. Moreover, the court let stand the perverse practice of mixing medicine with murder, ensuring that all Americans can experience a little taste of the death penalty when they have their colons scoped.